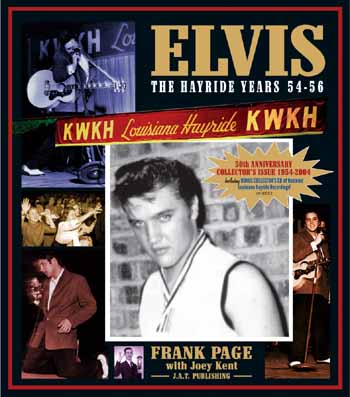 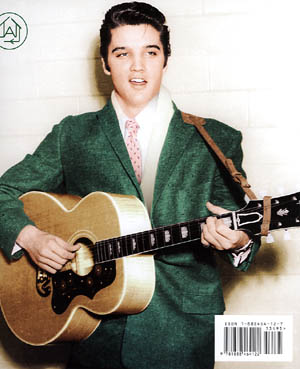 We received this morning the new book ‘’ Elvis- The Hayride Years 54-56 ‘’ by Frank Page and Joey Kent published by J.A.T. Publishing. After our interview with Joey Kent we had the feeling this book would meet all our expectations, and quite frankly it did just that and beyond.

The size of this book is the same as previous book from J.A.T. Publishing ( Rock’n Nassau, For The First Time Ever, Hawaiian Spirit, etc… ) and contains 96 pages. Most of the pictures and graphics were provided by the Louisiana Hayride archives but some came from external sources such as Langston McEachern and Ernst Mikael Jorgensen to name a few. The lay out of the book is also excellent and gives life to the pictures and different documents presented here.

The text throughout the book was written by Frank Page who recaptured the moments when Elvis appeared at the Louisiana Hayride. This is a very interesting read and how fascinating to have lots of dated photographs accompanying the text, along with posters, news clippings, letters and notes. Even more fascinating is the inclusion of several pages of the diary of  Joyce Railsback who were taking notes of who was appearing at the shows and what they were singing. A good example of this being her notes on the first show Elvis performed as a regular of the Louisiana Hayride on November 6, 1954. She misspelled Elvis’ name and wrote ‘’ Elvis Prestly ‘’ which was definitely unknown to her at that moment, yet she had the name right on his diary page of December 18, 1954. The songs Elvis performed on November 6, 1954 were ‘’ I’m Gonna Sit Right Down and Cry Over You ‘’, ‘’ Fool, Fool, Fool ‘’ with a mention saying ‘’ He has a strange and different style and may go places with it ‘’ and finally ‘’ Blue Moon ‘’ ( possibly meant ‘’ Blue Moon Of Kentucky ‘’ or perhaps not ? ).

The book contains some photographs we have seen before but a whole lot are being seen for the first time. I won’t go into details about the different pictures illustrated within the pages of this book but the shots taken during the three months of 1956, and the ones from December 15, 1956 are among my favourites. Since a second book is planned on Elvis’ last Louisiana Hayride performance of December 15, 1956, I can’t wait for that one to be published as well as some of the photographs used here are simply stunning. 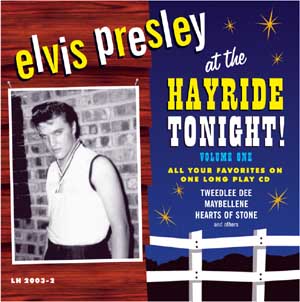 ‘’ Elvis – The Hayride Years 54-56 ‘’ comes with a bonus collector’s CD of restored Louisiana Hayride recordings titled ‘’ Elvis Presley At The Hayride Tonight ! ‘’. I wasn’t expecting much from this CD considering we’ve got so many releases from these recordings over the years. The back cover of the CD mentions ‘’ For The First Time ! Digitally restored from the original sources in the Louisiana Hayride archives ‘’. Are these tracks sound better than before ? The answer is yes.

I compared the tracks featured on this CD with the same ones contained on the CD ‘’ The  Elvis Broadcasts On Air ‘’ which I considered to this day the best source for the Hayride recordings. The first two songs on the bonus CD are ‘’ That’s All Right ‘’ and ‘’ Blue Moon Of Kentucky ‘’ from Elvis’ first performance at the Hayride on October 16, 1954. Those two are possibly the ones who sounded quite the same on both releases although I would give a slight advantage to the bonus CD accompanying the book. The same can be said for ‘’ Baby Let’s Play House ‘’ but ‘’ Tweedlee Dee ‘’ From April 30, 1955 is definitely way ahead on the ‘’ Elvis At The Hayride Tonight ! ‘’.

‘’ I Was The One ‘’ and ‘’ Hound Dog ‘’ are equally sounding better here than on the ‘’ Elvis Broadcasts On Air ‘’ CD, and moreover ‘’ Hound Dog is a just a bit longer here since it starts a few lines before the drum rolls leading to the second verse of the song. ‘’ Hearts Of Stone ‘’ is possibly one of the poorest track we’ve got from the Hayride from a very scratchy acetate. Yes, you can still hear some scratches but the improvement is important here. Indeed we here much lesser scratches and more of the music and Elvis’ vocal here.

‘’ Maybellene ‘’ comes with the mention ‘’ reworked audio ‘’. Not exactly certain what it means but the result is a track that is much better and sound relatively fresher when compared to the previous outings of this performance. ‘’ That’s All Right ‘’ from January 22, 1955 is also sounding better. The last track with June Carter talking about Elvis and reading a poem on March 6, 1960 at the Hayride is fun to have although not essential by itself. The audio restoration was done by Little Walter Devenne and he did overall a great job on these Louisiana Hayride recordings.

Unless my memory is failing, I think this is the very first book on Elvis during the Hayride Years. We had other books containing documents and pictures related to the Hayride, but nothing as extensive and comprehensive such as this new book by Frank Page and Joey Kent. These gentlemen did a marvellous job and with the help of .J.A.T. Publishing produced what has already became one of my favourite book on Elvis.

If you are allergic to Elvis in the fifties then this book isn’t for you. However if you dig that stuff then hurry to grab a copy while they last. You’ll be happy that you did and give several spins to the bonus CD, after all what we hear on this is the wild rocker who would soon become the King Of Rock’n’ Roll. I can’t wait for the second volume and CD !!!!!