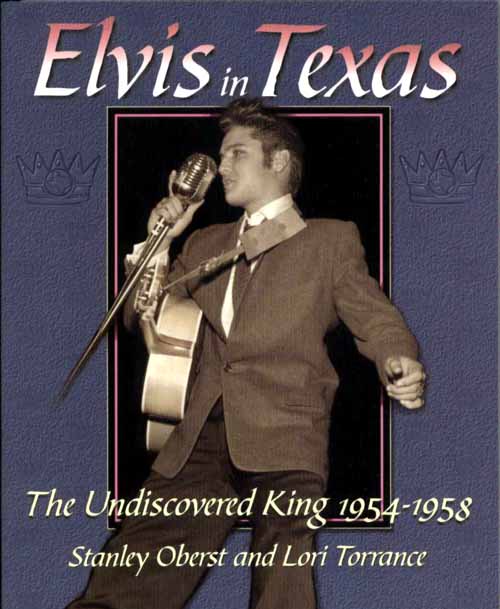 As mentioned previously, I haven't read a lot of book on Elvis. But this book has to be one of the most interesting regarding the early career of "the boy who would be king" and his compadres. "Elvis in Texas" was written by Stanley Oberst with Lori Torrance. Don't let the cover of the first printing misguide you. In an e-mail interview with Mr. Oberst published the second week of June 2002 on the Elvis News E-zine, Mr. Oberst does explain the printing mistakes regarding who actually wrote the book and the fact that Mr. Torrance helped in the editing process. Mr. Oberst makes mention that the second printing has been corrected.

Printed earlier this year (2002) by Republic of Texas Press, the book clocks in at 232 pages and has many rare photographs taken by the fans who were actually at these early performances. But most importantly, the stories and recollections of these people who had been lucky enough to attend these early shows share intimate, revealing, never before published stories surrounding Elvis, Scotty, and Bill's treks all over the great state of Texas. Elvis, Scotty and Bill toured Texas extensively, and this book features an incredible amount of research that brings these stories together in this very fascinating chronological telling of the bands rise to stardom.

The book is written in a very light-hearted, cheerful mannerism; which given this period in American History…the mid 50's, is perfectly suited not only to the subject material, but also the times. The photo captions are very clever and fun. I had read one review that criticized the writing style, though I do not know from what country the writer of that review was from, anyone with even a vague knowledge of American History will "feel" that the writing style used fits the time period; perhaps mostly in a romantic sense because the 50's were not perfect obviously. However, even though I was born long after this decade, I connected the writing style to the "notion" and feeling of how those who lived and grew up in the 50's seem to remember the time. And yes, it is true, back in those days no one need lock his or her doors, so I deem that there is in fact some truth to what may today be believed a "stereotype" of America in the 1950's.

Returning to the book now, I found the book almost sad as it came to an end. The book covers the period from when Elvis first starting playing in Texas in 1954 till just prior to Elvis' being sent to Germany in the service of his country in 1958. Elvis trained at Ft. Hood, Texas and often visited Eddie Fadal and his family in Waco, TX. Through stories told by people who saw Elvis, Scotty and Bill perform at these early shows, many of whom became fans and followed the bands performances throughout different venues in the state, it is perhaps the closest those of us who were not there will ever get to understanding the strange excitement and anticipation that swept Texas (and other states in the south) as Elvis, Scotty and Bill brought this new-fangled-rockabilly sound to teens and adolescents who just couldn't ignore the thumping beat…and the fact that their parents didn't like it!! We get to ride along with the crew in their adventures going from gig to gig, sometimes two gigs in one day, and all the problems that happened along the way. But something strange happens after we've gotten to know Elvis, Scotty and Bill… as the music becomes famous and the crowds increase to unmanageable sizes, we lose touch with Elvis. He no longer can hook up with a girl after the show and go out for some burgers and pop. After they perform on national television and become a national sensation, they have to sneak into arenas and skee-dattle out after the show to save their lives. It all happened so quickly, and we lose touch with Elvis and the band after only such a brief time of having enjoyed their company of coming to town to play that thumping rockabilly. All things must pass. This book is incredibly entertaining and interesting. And we can only hope that perhaps more stories will be added in the future. Or that perhaps we'll get future books with titles like "Elvis in Tennessee", "Elvis in Louisiana", "Elvis in Arkansas", "Elvis in Georgia", etc :>)

Review by Ernest Boyes Jr.
You can