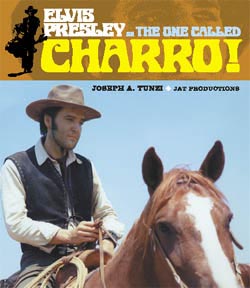 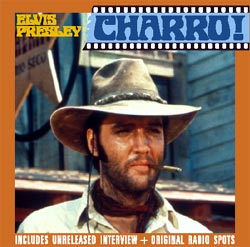 Elvis Presley As The One Called Charro ! (JAT Productions, 2006)

The latest publication from one of the undeniably fanatical chroniclers of Elvis photos in the world, JAT Productions, is a surprising hit. For some, the idea of a photo journal on " Charro, " a misbegotten, 1969 spaghetti western horse opera, would seem less than thrilling. But between production and publicity shots and some engaging text, Joe Tunzi pulls it off.

First of all, he made the canny decision to incorporate interesting, unpublished interviews with cast, crew and director, as gathered or conducted by author Bill Bram. The commentary is illuminating and reassuring. Elvis was, of course, the consummate professional and exceedingly kind to one and all. And expectations for the film were high, despite its ultimate outcome as a very standard western.

And who knew that Presley offered two private performances during filming? One occurred at the bar in Apache Junction's " Superstition Inn, " where everyone stayed while on location in Arizona, and the other at the end of filming cast party, on one of the " Charro " Hollywood sets. Given the powerhouse level of performance Elvis gave the NBC-TV Special he'd just completed before starting " Charro, " this is yet another " Holy Grail " of Elvis collecting. That is, if either was indeed recorded.

Bram will be publishing Elvis Frame By Frame, his own book on Elvis' movie career, in the near future, and it will clearly be a must-own for the serious fan.

Tunzi also placed the black and white production shots in order of the film's plot. This gives the whole book a substance it might have otherwise lacked. Following the story in the film, you get an idea of the story OF the film. And it must be said that Elvis was in the midst of a period where he looked absolutely incredible, and not a single photo here belies that truth. He is indeed one badass cowboy. It's a shame the film couldn't measure up.

Co-star Ina Balin also makes the case as one of Presley's most beautiful co-stars, very firmly in the mold of a Sophia Loren. And the delightful series of publicity shots of her and Elvis towards the end of the book reveal a genuine camaraderie and warmth.

The remainder of the book includes 15 pages in full color, film PR previews and related recording documents. And herein lies a true nugget, whether JAT intended it or not.

On page 98 are reproductions of union contracts for musicians involved in the recording sessions for the film soundtrack. The title track was cut on October 15, 1968, and then Hugh Montenegro's orchestral overdubs were done a month later. What the sheets reveal is that these overdubs were done on November 26 (not 25, as previously thought), and another six hour session occurred on November 27. This last date includes the celebrated Earl Palmer on drums, and would mark the only known session connecting the New Orleans legend and Elvis Presley!

What exactly happened that Wednesday at Sam Goldwyn studio? What recordings were made? And was Elvis involved? Perhaps a mighty wind will one day sweep away the cobwebs, and reveal what was accomplished before the Thanksgiving holiday in 1968.