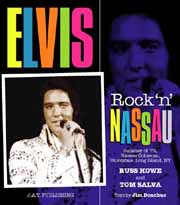 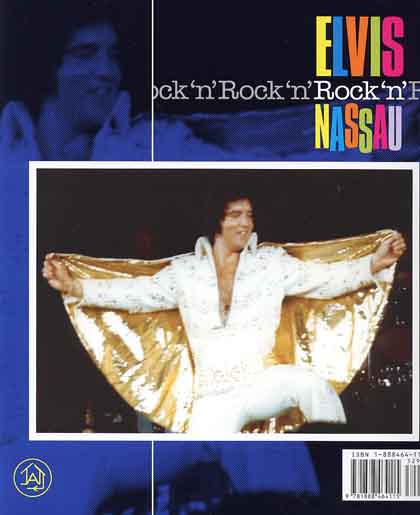 We have just received this morning the latest publication from J.A.T. Publishing. This new book from Russ Howe And Tom Salva with a text from Jim Donohue is about the shows Elvis gave at the Nassau Coliseum during the Summer of 1973. All the pictures in the book are related to two performances at the Nassau Coliseum, the second show in Uniondale of June 23, 1973 matinee show and the closing show of June 24, 1973 in the afternoon.

This book has all the ingredients for making an excellent thematic book ; nice front and back cover, great pictures, memorabilias ( ticket stubs, newspaper review, backstage shots ) and minimal text as the photos speak by themselves.

" Rock’n’ Nassau " features photographs by Carole Mason. This name won’t mean much to several persons but quite known by older photo collectors as Carole Plaia. The authors stated that " this book contains concert photos, most of which have never been seen before…." And this statement is actually correct. Some of Mrs. Mason’s work were published in the " Strictly Elvis " magazine ( p.7, 9, 11, 91, 92 and possibly a few others ), but it was thirty (30) years ago and most readers never even saw this magazine. Besides the quality of printing back then didn’t do justice to these GREAT pictures.

Roughly one third of the book contains pics from the second show and the rest from the closing performance in Uniondale, Long Island, NY. There are a few photographs who are a bit blurry but overall these shots are among the best I have seen from those performances in Long Island, NY from 1973 , a few examples can be found on pages 46, 48, 52, 59, 71, 72. Most of all the latest books from J.A.T. Publishing contained a color section, but not this time as the only color photograph is on the back cover. Don’t be put off by such small details as the book is worth having. These shows from June 1973 were far better in my opinion than the ‘ Aloha From Hawaii ‘ concert as Elvis was really Rock’n’ Nassau.

This book is also available through our shop