Where The Canuck Stood Alone....

by The Crazy Canuck

After all the excitement created at the New Year Eve's Pittsburg show, my friends and I decided to follow a complete tour and the February '77 one seemed like the ONE. There were many reasons to that, one being that the Canuck wanted to get away from the cold and snow up North, and we also had a feeling that it would be an excellent tour, moreover the idea of following a complete tour seemed like an awesome idea and AWESOME it was.

This tour started in Florida, so after Hollywood, West Palm Beach, St-Petersburg and Orlando we headed North to Montgomery,Ala. and this is where the story takes place.

When we arrived in Montgomery it was relatively cold when compared to Florida but yet much better than Canada at this time of year. We found out an hotel close enough to the Garret Coliseum and went there as soon as possible because we had to find tickets for that evening performance. We did find these much needed tickets quite early from a scalper hanging out outside the Coliseum, and at a very fair price too when compared to what it was in Florida, indeed the tickets were rarer and much more expensive South of Alabama.

Yeah I had find the ticket but it was pretty much a very bad seat on the main floor and decided that I would move a bit into different spots inside, thus trying to find myself the best place for attending the show without being disturbed by someone always asking me to go to my seat or can I see your ticket? Unfortunately it happened at least three times during the concert and had no choices  but wandering into the Garret Coliseum during the show.

Finally the reason of our trip was reaching our ears while the house lights went down and the band started playing the 2001 theme. By itself this part only would give goosebumps to a dead person, although it might sound unfair to all the fans who never had the experience of witnessing this, it had to be lived for really know how it was and I guess that all the younger fans who had the possibility to attend one of the " Elvis In Concert 1997-1998-1999 " shows can at least say that they lived this excitement. The adrenaline rush going through your veins before Elvis climb his few stairs and finally being seen by the entire crowd, the flashbulbs, the music and just him walking on stage was worth by itself the price of the ticket. Still today I get very emotional when I think about this and it might explains why I attended so many shows in a short period of time ( 34 shows in eleven months ). I was like a skydiver who would continuously defies the law of Newton and constantly wants to open his parachute at the last minute knowing his speed is increasing a lot at every feet he's falling into the empty air. Those are quite different experiences but both can give you this adrenaline rush that makes you feel on top of the world and I guess this is how Elvis felt when getting on stage, in fact he said once " A live concert to me is exciting because of all the electricity that is generated in the crowd and on stage....", after all maybe am I mistaken and should had involved Ohm's laws instead of Newton's laws ? <g>

Now here he was on stage with some 16 000 fans pouring their hearts out, yes the excitement 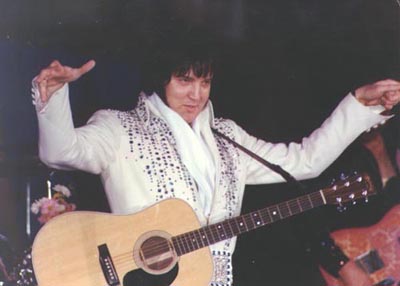 was still there and more barrage of exploding flashes when he steps up to the microphone and sings, " Oh see..see rider...", right there you know that it should be a good show because he sounds like into the beat. After the usual " well..well...well..." he goes into " I Got A Woman/Amen " followed by " Love Me " and a very good version of " If You Love Me Let Me Know ".

At this point into the show the Canuck has been removed twice as Coliseum's attendants wanted me at my seat, so I had to find another place when Elvis started to sing " You Gave Me A Mountain " (a pretty good version by the way), that latter song was quite impressive live as Elvis always seemed to really have a lot of feelings while singing this, same goes for " It's Now Or Never " that followed which became a regular into the concerts since late 1976.

Then came a pretty good version of   " Little Sister ", this song was re-introduced regularly into the shows in 1977, Elvis sang it at the Pittsburg '76 concert but up to that point it wasn't a regular number in his show although it was performed regularly at the December 1975 Vegas season. It was quickly followed with " Teddy Bear/Don't Be Cruel " but there were two false starts on "Teddy Bear" before he really went into it, apparently Tony Brown wasn't totally right on his intro and Elvis made him re-do it twice.

" My Way " came next and even if it wasn't a bad version most renditions of that song the previous days were much better, afterwards   another highlight of Elvis' shows is certainly " Polk Salad Annie ", the music is loud and very hard and it's a real treat to hear the band cookin' on this one.

" I'd like to introduce you to the members of my group...." was the cue that  led into the long introduction of the band, way too long but with some good moments too, for instance to hear Elvis sings " Early Mornin' Rain " only with guitar or a very soulful " Love Letters " with David Briggs' electric piano was magic, definitely some of my personal highlights in every shows. Unfortunately this was the last tour that Elvis performed " Love Letters " during the intros as David Briggs left the group and got replaced by Bobby Ogdin, later on that year Elvis did a similar thing with Tony Brown and sang " I Really Don't Want To Know ", but this is a different tour and a different story as well.

Oh yes, the Canuck was again being sent to his seat and choose instead of  going into the elevated section behind the stage, I went down into the stairs and ended up right above Tony Brown's head some six feet higher. Elvis sang " Hurt " and as usual was among crowd's favourite number then went quickly into a fast version of " Hound Dog " (another crowd favourite..sic!!!!!), near the end of the song someone threw on stage a pair of red pants that had a stoned heart shaped with "Lisa" written inside. 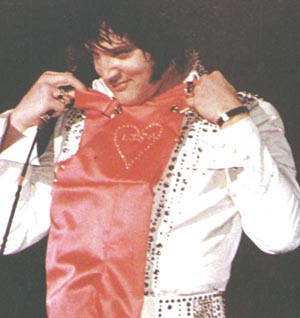 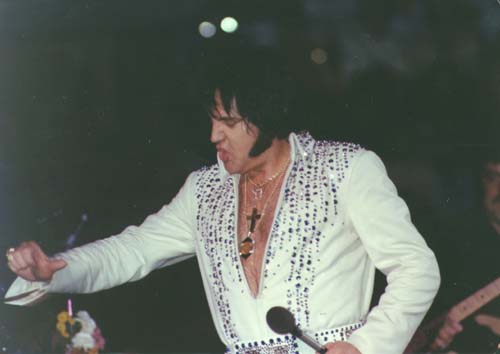 For another time I was being asked to move from there and go to my seat, of course I gave them the impression I was leaving and just returned to my spot, while going down there Elvis sat at the piano (a few feet below) and announced that he was going to sing a gospel song that he had never done before. 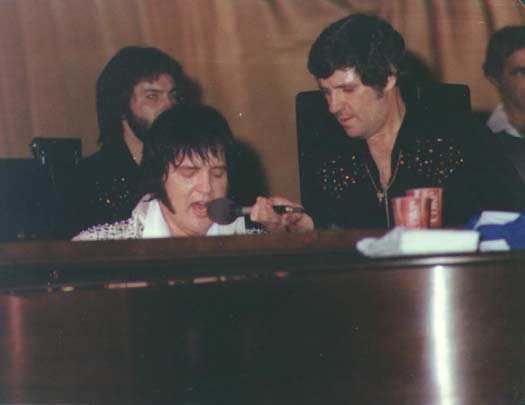 He accompanied himself on " Where No One Stands Alone " and sung a beautiful rendition of this gospel number, yet it was another MAGIC moment, I was happy beyond reason and for a few minutes I had the impression of being all alone up there  and listening to that voice spreading into the building. He remained at the piano and went into " Unchained Melody ", although that one wasn't new to my ears I wasn't about to start  complaining. <g>

Too soon the band played the intro of " Can't Help Falling In Love " and Elvis had left the building for another one the following night, it was now time to go back to my friends on the main floor and left that spot where the Canuck stood alone...

All photos are George Hill ©