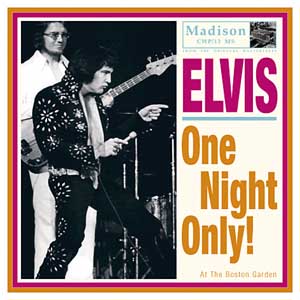 This CD contains Elvis’ performance in Boston on the 10th November 1971. It is a soundboard recording, marking the first concert where J.D.Sumner and the Stamps were included as backing singers in the line-up, replacing the Imperials, who apparently left over a wage dispute. Previously available on CD as The Power Of Shazam  ( on the Captain Marvel label ), this show has been re released by Madison, this time from a first generation tape in superior sound quality. So just how good is the sound on this new release? There is only one word to describe it—ASTOUNDING! Compared to the former show, it is the difference between listening to the show from outside the arena and being given a ringside seat—it really is that good.

Not only is the sound punchy, fresh and dynamic but the mix is excellent as well, allowing us to hear small details in incredible quality. As an example, check out the hand clapping by the backing groups during the opening song That’s Alright or during Polk Salad Annie. The drums in particular, are featured in amazing quality—nowhere will you hear the rimshots ( played on the snare drum ) at the start of Heartbreak Hotel, in such clear sound or the crisp scrunch of the hi-hat ( cymbal ) noticeable at various points during the show. Happily however, the drums do not predominate at the expense of any other instruments or singers. The backing singers and the orchestra are all heard to great effect and Elvis’ voice is clear and upfront as it should be. Even the crowd reaction can be heard clearly, both between and during songs, giving the show atmosphere and conveying excitement. In addition, Madison has produced a 16 page booklet containing informative liner notes with colour photos throughout, capturing Elvis in the Black Matador jumpsuit he wore for this show .Elvis looks wonderful here, so much better than he did in early 1972. It’s a real treat!

The show starts with the 2001 theme, which is not yet as powerful or refined as it would become, as this opening number was new this year. This leads into That’s Alright, featuring a deliciously raw guitar riff which kicks in after the drum roll, providing real excitement. I Got A Woman is performed next after a false start, and here again James Burton is on fire with some great guitar licks. This is followed by a raw and aggressive Proud Mary. After this high energy start, there is a rather breathless version of You Don’t Have To Say You Love Me where lyrics are omitted, possibly due to the attention he was giving to the girls at the ringside. A slow and much more committed You’ve Lost That Loving Feeling is performed next. It’s another great version. This is followed by Polk Salad Annie where he has fun with the introductory monologue. There are various humorous ad-libs and asides including “I used to know a gal who lived down there, who would go out in the evenings and pick a mess of it—weird old chick,” resulting in much laughter from his stage crew. A clear indication that he was enjoying the show this evening and a good version follows.

His 50’s hits are performed next and the first of these, Love Me, is sung at a faster tempo than it had been earlier in the year. His infectious laugh is ever present throughout Heartbreak Hotel and Blue Suede Shoes, but he still sings these to great effect, and there is a nice moment during One Night, after he sings the line ‘Just call my name,’ when fans can be heard shouting ‘Elvis’ in unison. Hound Dog starts off as a mid-tempo blues, before the beat doubles for the fast version we know from his Madison Square Garden shows the following year. The pace then changes for a slow and restrained How Great Thou Art, where the arrangement is sparse in contrast to the dramatic vocalising he would employ in later years. In this arrangement, his sincerity shines through but unfortunately it is not complete, ending around 2 minutes in, during the build-up to the final verse. In the booklet we are informed that this is where the C-60 cassette was turned over, also missing the first part of the introductions. During the part of the band introductions which were recorded, we hear John Wilkinson introduced as Abe Lincoln and the Tony Bruno orchestra accused of being members of the mafia!

After this, he introduces his latest record--I’m Leavin’--jokingly threatening to leave rather than sing it. He then performs a sincere and committed version, with effective backing from Ronnie Tutt’s driving bass drum rhythm. This is immediately followed by a great rendition of Bridge Over Troubled Water, which he sings with restraint and genuine emotion, before reprising the last verse, giving the audience another chance to enjoy the climactic ending. A passionate I Can’t Stop Loving You is performed next, then a two verse version of Love Me Tender, featuring various lyric changes, including the lines “For my darling I love you, cause you take the pill/always will.” Suspicious Minds follows, which is well performed as usual, including a karate workout during the ending, punctuated by Ronnie Tutt’s explosive drumming.

Elvis then asks for the house lights to be turned up to view and thank the audience, adding “I hope you enjoyed our show tonight folks”, before starting Funny How Time Slips Away. This is another good version, performed at a slower pace than it would be later, allowing more room for the instruments to ‘breathe.’ “O.K, let’s take it home” he calls out, ending this show with a mid-tempo and well sung Can’t Help Falling In Love. Even the closing vamp rocks more than usual before we hear the immortal announcement—‘Elvis has left the building’—which ends this CD.

In conclusion, this is a great concert from a period when Elvis was renowned for giving 100% effort in extremely energetic shows. Accordingly, all the songs in this concert are performed with energy and enthusiasm and the drama of the event can now be fully appreciated due to the fantastic mixing and outstanding sound quality achieved here. Simply put, this is one of the most vital and exciting concerts ever captured on tape, making it essential for every collection. Our thanks must go to the folks at Madison—believe me, they don’t come better than this!