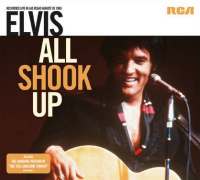 Punk rock lounge music. Bad-ass rock and roll, baby. Thank heaven for some of life's small gifts, like Follow That Dream's second complete concert release from Elvis Presley's return to the stage in August 1969. As with the official Presley collector's label's Live At The International, this is a high quality, multi-track RCA recording intended for his superb double LP From Memphis To Vegas / From Vegas To Memphis, a live/studio hybrid, at the end of the year.

The August 26 midnight show in Las Vegas is loose in all the right ways, with Elvis leading the music and sold out audience on a wild trip through his amazing career. Influenced by the smashing success of his December 1968 TV Special, and one of his musical inheritors, Tom Jones, Elvis proffers a muscular, pedal-to-the-metal set that takes no prisoners. Like the small combo, electrifying live segments from the TV spectacular, Presley will never repeat this type of presentation in the future. Elvis is totally in the moment, not a thought about tomorrow.

Elvis raises the roof with an opening triple attack of "Blue Suede Shoes," "I Got A Woman" and "All Shook Up." His extended introduction to "Hound Dog" is absolutely goofy, and a harbinger of events to come that night. Crazy comments startle like firecrackers the week before the Fourth of July. For example, during a blazing medley of "Mystery Train / Tiger Man," about a minute and a half in, he exclaims to someone "that son-of-a-bitch just fooled me too, boy!"

Afterwards, Elvis dons his electric guitar, plops down on a stool and free-associates a ten-minute "life story." Elvis' monologue is a hilarious, honest and bizarre stream-of-consciousness delight. It's no surprise RCA excludes it from their official 1969 LP of the engagement.

"I'm sorry, man, I'm about as cool as a bull elephant, I'll tell you. In heat," Presley joshes. When "That's All Right" is issued on SUN in 1954, he recalls the reaction. "People were saying 'Who is he? What is he? Is he? Is he?'" After his 1956 breakthrough, Elvis felt the heat for his unbridled performing style. "At that particular time, there was a lot of controversy because you didn't see people moving too much out in public. They were getting it on in the back, but out in public they were ... it was interesting."

Most telling is a reflection on his 1958 Army induction. "Then I got drafted, and shafted, and everything else, man. So overnight it was all gone, it was like it never happened, it was like a dream, you know. I'd, I'd made four movies and so forth, but it was all gone." How many picked up on some of the truths Elvis spilled onto the stage floor that night?

Elvis' abilities with a guitar whammy bar is demonstrated prior to a Dylan-esque arrangement of "Baby, What You Want Me To Do." "It took me a long time to learn to pull that handle, boy, I'll tell you for sure. You gotta know how to pull your handle, man," instructs the star, tongue set firmly in cheek.

A neat take of Del Shannon's classic "Runaway," first issued by RCA in 1990 on Collector's Gold, is beautifully done despite an amusing lyrical flub. Elvis slyly assigns the distinctive falsetto vocal hook to the Sweet Inspirations, while James Burton's solo sweetly follows the melody, recalling his best work with Ricky Nelson earlier that decade. Shannon is in attendance, and Presley makes a point of honoring him. "Glad to have you come out, man, I've been doing your song every night" says Elvis. What a thrill that must have been!

Amazingly, the beloved "laughing" version of "Are You Lonesome Tonight" has been officially out of print for a few years, a problem rectified with this FTD disc. Heard for the first time in context, it's obvious the uncontrolled outbursts of laughter from our hero could have occurred at any point during the evening. Elvis is in a crazy, silly mood all night long.

Somehow, Sweet Inspiration member Cissy Houston's mid-song obbligato brokethe dam, and got him all shook up. The recording is still as waggish as ever.

Elvis mentions RCA's live album desires and the possibility that they may have to try "a couple of new songs," and that "we may be here all night" until they're done right. The crowd roars its approval! Sure enough, when trying to kick out the jams on "Rubberneckin'," the group needs to halt about forty seconds in and begin again. The final result is a bold, hard-edged rendition, also first released on Collector's Gold. It sounds better here.

Into the home stretch, Presley takes the audience through an American Studios-like adaptation of "Yesterday," the Beatles masterpiece, with a bit of "Hey Jude" tagged onto the end. Two of his best recordings of the year, "In The Ghetto" and "Suspicious Minds," sandwich a cute but tentative run-through of "This Is The Story." The just-released and soon to be number one on the charts "Suspicious Minds" is another titanic performance, running almost seven minutes and bringing the house down.

If there was ever a time to see Elvis Presley in concert not from the 1950s or June 1968, this was it. All Shook Up is a ticket to that magical setting in August 1969, where Elvis was thin as a rake and handsomer than ten movie stars. And rocking the world for maybe the last time.