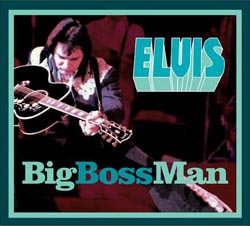 Big Boss Man captures a spooky moment in the later stages of Elvis Presley's career. A great artist, mired in repetitive live shows and infrequent, substandard studio sessions, is suddenly revitalized this evening. In fact, Elvis seems to be on his best behavior, putting spirit into both set standards and newer material. But why?

In many ways, this gig might be considered an audition of sorts for the role of John Norman Howard. In the audience is Barbara Streisand, with then-partner Jon Peters, and she's not at ringside to capture a sweaty scarf. She wants Presley to co-star in her contemporary remake of "A Star Is Born."

This very good soundboard recording, most of which is likely from the March 28, 1975 MS in Las Vegas, is yet another piece of the puzzle, courtesy of Follow That Dream, the Presley collector's label.

Elvis delivers the goods, especially on all of his recent recordings. In a rare 1-2 punch, Elvis knocks out Chuck Berry's "Promised Land" and "Burning Love" back-to-back, his two finest 1970s rockers. What a treat!

The unique Presley charisma is on display, as usual. Prior to "Love Me" Elvis allows a ringside female some mic time. She does not mince words. "I love you, don't keep me waiting, I love you, I love you," she moans. "Hey, there's 2,000 people listening here, you know that?" queries the star. "I don't care," is her saucy reply.

For the next hour, Elvis mostly lives up to his vast talent, with "And I Love You So" and "An American Trilogy" being especially delightful.

Elvis says hello to "The Young And The Restless" TV soap actress Trish Stewart, and follows that with a "shout out" to the audience's biggest star. "One of the finest voices in the world," he declares, as the assembled give Barbara Streisand a tremendous ovation. "Thank you for showing up," Elvis deadpans. "See you after the show."

Not a single fan of Elvis believes for a second that he would've died, barely two and a half years from the date of this show, had he been a part of the "A Star Is Born" project. Every moment that passes on this disc reinforces the wish to scream at Presley "Make that movie!" Sadly, Presley's management does everything possible to derail the opportunity. Unlike Tom Parker's efforts with Steve Binder and the 1968 TV Special, negotiations ultimately go nowhere. Within a month, Streisand and Peters take their remake to more willing participants.

When the deal dies, so, in Elvis' mind does his dream of artistic redemption in Hollywood. Kris Kristofferson gets the role, the film ends up being one of the biggest hits of 1976, and the soundtrack is a #1 smash.With no more mountains to climb, Presley commences a slow descent into an abyss of depression, defeat and extreme prescription pill abuse.

On a happier note, the bonus tracks further mirror the generally upbeat mood of this Las Vegas visit. Even "Little Darlin'" is handed some TLC, bearing two false starts before it's off to the races. "Goddamn it, no, no, no, let's do it right!" commands the singer. "You're The Reason I'm Living" first escaped officially on BMG's Live In Las Vegas box set a few years back. It remains a marvelous performance, one that was clearly rehearsed, despite Elvis' claim at the song's end. Listen for a "one-liner" of 1969's "I'll Be There" just before it begins.

The previously unreleased cover image, courtesy of "super fan" Sandi Haynes, is remarkable and appropriate. In fact, if there's a better "bad ass" picture of Elvis in 1975, it has yet to be published.