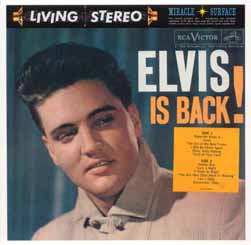 One of the greatest understatements in the history of rock and roll album titles, Elvis Is Back! declared in no uncertain terms that Elvis Presley wasn't as good as he was in the 1950s, he was better. From rock to pop, gospel-tinged ballads to tough Chicago blues, Elvis made magic in less than an hour. Seldom in his career would he be so consistently superb in voice, performance and material.

The deluxe, two disc edition of Elvis Is Back! on Follow That Dream (FTD), the official Presley collector's label, is the definitive look at the album, the worldwide hit single recordings cut at the same sessions, and how it all developed inside Nashville's Studio B in the spring of 1960. For nearly 160 minutes, FTD lays bare almost everything released, officially and otherwise, from the March 20/21 and April 3/4 dates. Not a second is less than a thrill and a delight.

The music itself is coherently and attractively laid out, from "Album" to "Singles" to "First Takes" on CD 1 to "March Sessions" and "April Sessions" on CD 2. The usual gorgeous glossy booklet sports plenty of session and release details, along with several full color promotional portraits taken just before Elvis was discharged from the Army in March 1960. It's a shame he didn't have a few more days booked for additional studio work. Even the lesser tracks became golden with Presley and his able band.

The warmth of these 1960 master recordings is palpable, and as good as anything issued so far in the digital era. Evidently, such exquisite audio quality did not come easily for the FTD team, as certain master tapes were so heavily processed they could not be properly decoded. Careful use of an alternate source provided the higher resolution, more exciting result on the original album tracks, for example.

Citing highlights of the released stuff is slightly ridiculous. Of the 18 songs recorded, three were worldwide number one singles, with two -- "It's Now Or Never" and "Are You Lonesome Tonight?" -- showing new directions from the Tupelo, Mississippi native. It's evident that, while stationed in Germany, Elvis had worked to expand the power and range of his voice, as well as seek out the music that would define his return to civilian life.

Exclusive album recordings like "Fever," "Such A Night" and "Like A Baby" are some of the richest of Presley's career, not to mention stunning single B-sides "Fame And Fortune" and "A Mess Of Blues." Most importantly, the 1960 album closer, "Reconsider Baby," is one of the ten best songs Elvis ever laid onto tape. In a nice surprise, the singer's count-in to his astonishing reworking of a classic Lowell Fulsom blues is included for the very first time as well.

For fans of this era, moving on to unreleased gems is where the fun really begins. "Let's cut one," suggests co-producer Chet Atkins. And so begins an almost acapella take 1 of "Make Me Know It," and Elvis' return to formal studio work in almost two years. According to engineer Bill Porter, the tension in the control booth was thick. Management and RCA executives alike wanted to know did Elvis still have "it"? Their answer was delivered in less than three minutes Yes.

"If I hit a few bad notes here because I can't my bearings right, you know, but uh, we got plenty of tape," apologizes Presley before a near-perfect take 1 of "Fever." Other numbers go through key, arrangement or tempo changes en route to perfection. Sometimes, as on "Soldier Boy," it's just a little technical problem. "OK, one more, we got a pop on 'feel' ... a mic pop, you know," explains Chet. "I thought you said a puff," jokes Elvis.

The sexual firepower of Elvis' vocal on "It Feels So Right" is coupled with a sense of menace on the outtakes, with Floyd Cramer's piano fills in nice, nasty counterpoint to Hank Garland's repeated guitar riff. It is Elvis himself who kicks off the guitar intro to Jesse Stone's "Like A Baby," until he realizes it disrupts his vocal concentration. "Hold it! I can't think of two things at once!" he exclaims. It's fascinating to hear how hard Presley worked to craft "It's Now Or Never" as a powerful pop homage to vocal hero Mario Lanza. True to the legend, he did indeed hit the final ending notes in a single, complete take but, ironically, had to splice them onto to a later effort, as the band played the final bars that much finer.

In general, like much of the music taped at Nashville's Studio B by Elvis during the early-to-mid 1960s, the rejected performances are often only a hair worse than their released counterparts, a testimony to the talents of all involved.

And Elvis Is Back! is undeniable evidence of a unique and enduring musical vision from the greatest singer of the twentieth century, Elvis Presley.