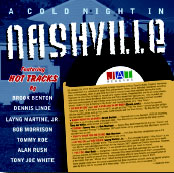 Alan Rush : First let me say it's my pleasure to talk with you about some of my elvis studio experiences. The new CD "A Cold Night In Nashville" is a treasure of the elvis pre-recording demos that few people, outside of studios and publisher's offices, have ever heard. This will be the first time his fans have been able to hear the demos that Elvis and Felton Jarvis heard for the January '77 session- The " Cold Night In Nashville ".

FECC : You worked at Soundmaster in Nashville,TN as a musician ( guitar player and backup vocalist ) on the overdub session for ‘’ If You Love Me ( Let Me Know ) ‘’ and ‘’ Unchained Melody ‘’. Was it the first time you participated on some Elvis Presley’s studio recordings ? If not, what was the first session you worked for and were you only used on overdub sessions ?

Alan Rush : I first worked on Elvis tracks as a " booked " ( hired ) musician in january '74 at rca's studio "B" playing guitar, bass, horn parts and vocals-in effect whatever Felton needed to fill in, replace or improve instruments on the tracks that had been cut earlier in Memphis. Musicians included the entire rock group," Jubal ", who's members included Rob Galbraith, Bobby Ogdin, Randy Cullers, Dennis Linde, Terry Dearmore and myself. Felton would play the tracks and we all would make suggestions, try them and Felton would have final approval. We went through everything -some would have nothing added, some just percussion or an instrument or two and others would take more. Not all parts or songs were listed on the timecard but Mr. Tunzi's new book, " Elvis Sessions III "covers it more accurately than any book ever has. "Promised Land"," Good Time Charlie's Got The Blues ", " I've Got A Feelin' In My Body" and other titles were overdubbed . I only worked on overdubs not any track session.

FECC: Did you meet Elvis at any of these sessions ?

Alan Rush :I never met elvis at any of these overdub sessions.

FECC: We all know that Elvis was scheduled to record some tracks from January 20th to the 24th , 1977 at the Creative Workshop in Nashville, TN. Unfortunately no selections were recorded as Elvis didn’t show up at the studio. Do you have inside informations that you can share with us as to why he never showed up to the studio ?

Alan Rush : The January '77 sessions at Buzz Cason's Creative Workshop were booked and started with the band cutting 5 tracks that I know of, with one of elvis' background singers doing reference vocals ( Elvis' parts ) for the musicians to follow. Full band tracks were cut for " That's What You Do To Me ", " By Day By Day ", " Let Me On ", " Energy " and " Yes I Do ". I know this because one of the band members, who has to remain unamed, called me from the session to tell me about my song. We found out later that Elvis was in town, went to the studio, had some problem(s) and went back to Memphis. Felton told me Elvis would do the vocal later in the year, which of course never happened.

FECC: We can assume that the producer ( Felton Jarvis ) was somewhat nervous and irritated since he badly needed some cuts for the next album ( Moody Blue ) and for the one to follow. Do you know what was the atmosphere in the studio when it became evident that Elvis wouldn’t show up ?

Alan Rush : Please understand I wasn't there but good friends were playing on that session and we never knew Felton to ever be irritated or nervous. He was always cool especially in the studio. They respected each others talents and these were Nashville pickers- they play no matter what.

FECC: Many songs were under consideration for these January ‘ 77 session in Nashville, TN. According to the book ‘’ Elvis Sessions II ‘’ by J.A.T. Publishing six were positively chosen including ‘’ Yes I do ‘’ written by yourself. The other tracks were; That’s What You Do To Me ( Bob Morrison ), Energy ( Bob Morrison ), Rainy Night In Georgia ( Tony Joe White ), Day By Day ( Dennis Linde ) and Let Me On ( Layng Martine Jr. ). Can you confirm that these songs were indeed positively chosen ? If yes, what can you tell us concerning these tracks ?

Alan Rush :In addition to the five tracks I named earlier, I know " Rainy Night In Georgia" was planned to be cut also.

FECC: Does your involvement with this session was limited to the fact Elvis choose to record ‘’ Yes I do ‘’ or also under contract as a musician for the January ‘77 session ?

Alan Rush : I wasn't booked for the track sessions in January '77 , but would have probably overdubbed on them later. Bobby Ogdin had joined Elvis' band playing keyboards and Randy Cullers joined as percussionist- both were former " Jubal " members.

FECC: Was it the first time that you were submitting a song to Elvis ? If not, does some of those songs were recorded by other artists ?

Alan Rush : Felton Jarvis and I had been friends for a while ( we both loved "B" westerns and old cars ) and he asked me why I hadn't given him anything for Elvis. I told him I had written a song for Elvis but didn't want to play on our friendship. He said a hit is a hit no matter where it comes from. I plugged ( pitched )  "Yes I Do" and he took it to play for Elvis and they said we'll cut it. I never pitched the song to anyone else-it was his song. The "Cold Night In Nashville" cd is the first release of my song.

FECC: Do you know about other songs that were seriously considered for Elvis to record at this session ?

Alan Rush : I don't personally know of any other than the six I've mentioned, but like Hank Aaron's home run that broke Babe Ruth's record, more and more people claim to be there everyday. There must be 80 or more writers that claim to have had a song on the unfinished January '77 sessions but I only know of six songs and five tracks.

FECC:On behalf of all our readers we would like to thank you very much for your kindness and for having took the time to do this interview with us. We would like to wish you all the best of luck with your future projects.

Details for ordering '' A Cold Night In Nashville '' at www.jatpublishing.com