This book has been released last Fall but never had the time to make a review until now. First a few words about the author, Dagmar grew up in Austria and later moved to New-York, and eventually shifted careers there to become a full time photo journalist.

Dagmar had the “ chance “ to follow Elvis during the September 1970 tour ( St.Louis, MO, Detroit, MI and Miami, FL ) and took great pictures of our man in action. Thanks to Wolfgang Hahn from the Austrian “ Always Elvis “ club we can now see and enjoy the work of Dagmar, the lady photographer.

This book comes with a nice cover jacket and a text related to the shows attended by Dagmar during this tour, along with extra details surrounding the whole experience of following an Elvis tour in September 1970 tour. All the text inside is in English and German language.

The book is about a hundred and sixty three (163) pages, soft cover, size is 22,5 cm x 22,0 cm and contains more than a hundred and thirty (130) unpublished pictures including sixteen (16) in color. The overall layout and design is very attractive although these pictures would had deserved a treatment similar to the book “ Caught In The Trap “, yet the rarities of the pics make you forget about these small details.

Dagmar certainly captured the excitement in photo of what was Elvis at this stage of his career : the best live entertainer the world has ever seen, raw power like a tiger that has been just released from his cage, sex appeal and in full control of his act.

A good percentage of the photographs inside the book are from the Miami, FL September 12, 1970 evening show ( easy to spot because of the curtain behind the stage ) and Detroit, MI on the 11th. Elvis was wearing at both shows the famed “ Chain jumpsuit “ with a brown macrame belt. 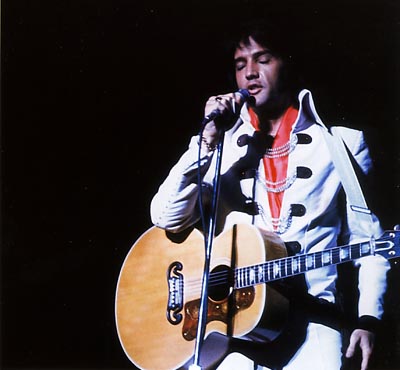 I’m a bit confused about one fact in the book. Dagmar mentioned that Elvis was also wearing that suit in St.Louis,MO. However Steve Polworth from St.Louis,MO told me back then that Elvis was wearing the “ Fringe jumpsuit “ in St.Louis, so who’s right ? At first sight I’d say there are no pictures from St.Louis within this book but only shots from Miami ( evening show ) and Detroit. Ed Bonja did publish some pictures in a few books with the “ Chain jumpsuit “ with the red macrame belt and identified as being from St. Louis,MO, however those were taken in San Diego,CA during the November 1970 tour.

Obviously the above is a “minor detail “ and what really counts is the overall quality of these photographs.The movie “ That’s The Way It Is “ ( original & Special Edition ) gave us quite an idea of what Elvis was all about in 1970, yet the shows in September and November 1970 were wilder. I can only assume that the excitement from large crowds contributed to this fact when compared to the relatively quiet Las Vegas crowds.

Thanks to Dagmar and the Always Elvis club we can now enjoy these photographs, and see for our own eyes through her lens Elvis in September 1970. Needless to say that the book is highly recommended for all serious collectors and jumpsuit junkies out there.

- Elvis Gets It Together In Miami