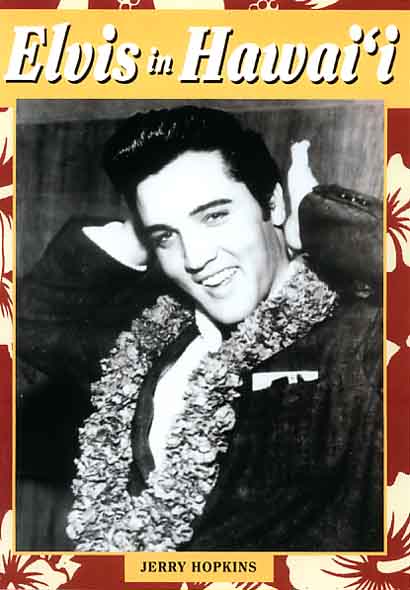 Bess Press in Honolulu has published a new book by Jerry Hopkins. The author, a twenty-year veteran of Rolling Stone is known to the Elvis world with his previous publications Elvis : A Biography ( 1972 ) and the sequel Elvis : The Final Years ( 1980 ). This is a 8 ˝” x 11” size book with 96 pages and comes in a flexibind format.

This new book features over 100 photographs ( several unpublished ) and focus on Elvis relationship with Hawai’i. The book contains as well some interesting memorabilia from the personal collections of Tom Moffatt, DeSoto Brown and Eddie Sherman amongst others.

The book is divided in seven chapters. It starts with Elvis’ first visit in Hawai’i  in 1957 where Elvis performed two shows on November 10th and ends with his last vacation there in March 1977. The most interesting pictures are from Elvis’ first two visits and several were unknown to my eyes. I was hoping to see some photographs of the November 1957 shows but none were included though. Yet there are still some personal anecdotes that gives some insight into the King's adventures in his favorite vacation spot.

Elvis in Hawai’i is an interesting book for regrouping a lot of informations on one aspect of Elvis life. His love for Hawai’i is well known by all the fans around the world. However the book would had been a bit more complete if other vacations would had been documented as well, for instance the ones from May 1968 and 1972. A few shots of the three Honolulu November ’72 performances could had been welcomed too.

Overall this book is recommended to the fans who wants to have a document on Elvis relationship with the famed Pacific Islands, and moreover to the ones who aren’t too familiar with Elvis In Hawai’i.

Elvis In Hawai’i by Jerry Hopkins is now available via Bess Press website at www.besspress.com .

Make sure to read our Concert Reviews related to Elvis' first visit in Hawai'i.