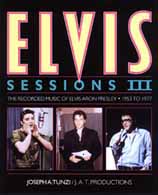 The book ‘’ Elvis Sessions III – The Recorded Music Of Elvis Presley 1953 to 1977 ‘’ has been released recently and was well worth the wait. This latest book from J.A.T. Publishing is definitely a big improvement over his previous effort published eight years ago. This is a huge book with its 656 pages ( including roman numerials ) and definitely an Herculean task to produce a book containing so many details about the music recorded by Elvis Presley.

The introduction has been written by Bill Porter which is mentioning his first encounter with the rock star in March 1960 and his involvement with Elvis during the years. After the inevitable ‘’ Guide To Elvis Session III ‘’ we get right into the main part of the books, which  are of course the Elvis sessions.

Although ‘’ Sessions III ‘’ isn’t a photo book, it does contain some very interesting pictures. For I, this is definitely a treat to have photographs taken during the actual recording sessions and / or others taken before or right after some of his recordings. Somehow I find it very interesting to have an idea what Elvis looked like when doing some of his recordings. I won’t mention all the pictures here but to me the highlights would be ; Elvis playing drums while Nancy Sharpe is dancing with ‘’ Wild In The Country ‘’ film director Philip Dunne ( p. 109 ), Elvis with Boots Randolph on stage at the March 25, 1961 Hawaii show ( too bad this one is reversed ) ( p.120 ), a shot taken during the recording of ‘’ Roustabout ‘’ soundtrack ( p. 158 ), all the photos from the ‘’ Harum Scarum ‘’ and ‘’ Frankie And Johnny ‘’ sessions ( p.164, 168, 169 and 174 ), the ones taken on September 10, 1967 and in January 1968 ( p. 209, 213 and 216 ), the very rare pictures taken up in Elvis’ suite in Las Vegas from February 1973 with Mama Cass, The Imperials ( they were working in Las Vegas with Jimmy Dean at the time ) and comedian Marty Allen ( p. 387 ).

One of the biggest improvements on the sessions chapters are the addition of the song titles along with serial numbers in the sessions notes ( previous books only mentioned serial numbers ), and also where we can find all the release takes on official releases. It was interesting to read that Elvis rehearsed ‘’ My Wish Came True ‘’ and ‘’ Doncha’ Think It’s Time ‘’ on January 23, 1958 ( King Creole sessions ) along with some changes in the recording dates for certain songs like ‘’ Plantation Rock ‘’ for March 23, 1962 instead of March 28, 1962 or ‘’ Yellow Rose Of Texas / The Eyes Of Texas ‘’ dated now for September 13, 1963 instead of July 10, 1963. ‘’ Sessions II ‘’ mentioned that the vocal overdub on ‘’ Kissin’ Cousins ‘’ songs were done in early October. ‘’ Sessions III ‘’ goes a step further and gives October 10, 1963 as the date for these vocal overdubs.

This is certainly of great interest as well to have the track listing of the warm up rehearsal Elvis did on July 27, 1968 ( only 2-3 hours before the actual first sit-down show ) in his denim attire. Back then we had only photographs with Elvis featured on it, later on some photos appeared showing the other members were present as well including one photo with a camera close by Elvis. I know this is ‘’ wishful thinking ‘’ on my part but perhaps one day they will find out some filmed and/or recorded sequences of this particular segment. For the first time we get all the details on all shows recorded by RCA in August 1969 ( complete track listing of each concert ). The Mock Session of March 30, 1972 for the movie ‘’ Elvis On Tour ‘’ and rehearsals of March 31, 1972 are also better detailed than previous Sessions books.

Somehow I have a feeling that RCA logs for the March / April 1977 recordings contains a few mistakes here and there. In ‘’ Sessions III ‘’ book you have a more detailed account of the recordings when compared to Ernst Jorgensen book ‘’ A Life In Music ‘’. Back then Ernst Jorgensen was giving ‘’ Bridge Over Troubled Water ‘’ and ‘’ Big Boss Man ‘’ as recorded in Saginaw, MI on April 24, 1977 ( those two songs weren’t performed that night ) and ‘’ Mystery Train / Tiger Man ‘’ as being recorded in Chicago on May 2 , 1977 ( not performed that night either ).These mistakes were corrected with the release of ‘’ Spring Tours ‘’ FTD where those songs had the correct dates. ‘’ Sessions III ‘’ contains as well some errors on these live recordings. There’s no recordings listed for March 30, 1977 in Alexandria, LA but some given for the previous night at the same venue. Since they recorded on Mach 26, 27, 28 and 30 then this is more than possible that some recordings were also done on March 29, yet we have a gap here since ‘’ Spring Tours ‘’ FTD released ‘’ Fever ‘’ from March 30. ‘’ Big Boss Man ‘’ is also listed for the April 25, 1977 show ( same as Ernst Jorgensen book ) and ‘’ Polk Salad Annie ‘’ ( both weren’t performed that day ), the latter song being also listed for the following Night in Kalamazoo, MI although not performed that night either. ‘’ Help Me ‘’ is also mentioned as being recorded on May 2, 1977 in Chicago, IL but not performed by Elvis that day, however it was sung the next night in Saginaw, MI ( May 3rd )  right before ‘’ O Sole Mio / It’s Now Or Never ‘’ and possibly from that date.

The chapter titled ‘’ Films And Television Specials ‘’ contains a lot of information. I read on the Forum that some fans were disappointed as there were not much new additions concerning the last two MGM movies. I certainly don’t agree with that. By example ‘’ Sessions II ‘’ listed back then seven (7) songs and or sequences filmed at the July 14, 1970 rehearsals and ‘’ Sessions III ‘’ twenty-seven (27), the former book had thirteen (13) for July 15, 1970 while the new book has fifteen (15). July 29 , 1970 rehearsals was fifteen (15) sequences and now the new book list twenty-one (21). You can compare yourself similar things for ‘’ Elvis On Tour ‘’ but I won’t do this for every date as I think you got the point here. The information on the filming of the movies ‘’ That’s The Way It Is ‘’ and ‘’ Elvis On Tour ‘’ are more complete than they ever been, and any new additions is always welcomed. We shall not forget either that these listings are based on the ‘’ official finds and paperwork ‘’ and some more might be found in the future into MGM’s vaults.

The soundboard sections contain also a lot of new additions when compared to ‘’ Sessions II ‘’. There’s almost additions for every year such as several recordings of the September / November 1970, November 1971, June and November 1972, April and June 1973, July 1975 and May & June 1977 tours to name just a few. We know that sessions materials won’t last forever but soundboards are definitely a hope for the future along with rehearsal recordings.

The chapter titled ‘’ Films, Television Specials and Video Analysis ‘’ is also very interesting. By example if you go to the movie ‘’ That’s The Way It Is ‘’ and ‘’ Elvis On Tour ‘’ you have the complete details on where and when each sequences has been filmed. I think this is a very good idea, and especially for the younger fans who aren’t yet familiar with such details, and nice for a quick reference if needed.

The fans interested with statistics won't be disappointed either with a chapter on Elvis' RIAA Certfied Gold And Platinum Awards and another on Elvis' Top Ten Singles, Extended Plays and Albums. There's also an extensive listing of Elvis' Grammy Nominations and other special awards. The book also include a complete discography.

The ‘’ Essential Bootlegs ‘’ chapter has been updated and also very useful for finding information on most of the best underground CD’s. As previous books you have a ‘’ Tape Legends ‘’ section and a better detailed ‘’ Rehearsals ‘’ section has been added. There’s also a chapter titled ‘’ Unreleased Studio and Live Recordings Highlights ‘’ which basically give a listing of songs ( with take numbers for studio recordings ) that hasn’t been officially released and some soundboard recordings are being mentioned as well. We have to note here however that some live recordings of August 1971 are mentioned while not featured into the ‘’ soundboard sections ‘’. I guess that time will tell but have a feeling these recordings are most likely from January 1971.

All in all this is an excellent book. Yes, there are some errors or minor mistakes but not too many when you see what this book has to offer. In fact I would say almost negligible for a book of this magnitude. If you want to have complete details on what has been filmed for ‘’ That’s The Way It Is ‘’ and ‘’ Elvis On Tour ‘’, this is the book. If you want to have the most complete listing of soundboard recordings, this is the book. If you want to find about every information you need about Elvis recordings, this is the book. We were certainly not disappointed with ‘’ Sessions III ‘’ and Joseph A. Tunzi definitely  produced a great book. This is HIGHLY RECOMMENDED and a MUST HAVE as far as we are concerned.

You can obtain a copy directly from Joseph A. Tunzi at jatpublishing@aol.com

Review by The Crazy Canuck