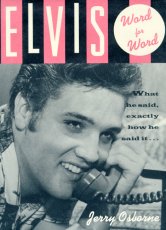 Another entry into the world of Elvis Presley tomes, this Jerry Osborne production attempts to transcribe every known Presley interview and press conference, plus selected on stage patter. The end result is, at best, average.

It's edifying to read the full transcript of significant and unusually lengthy interviews like those with Robert Carlton Brown in New York on March 24, 1956 or Lloyd Shearer on the set of "It Happened At The World's Fair" in August of 1962. And, not having a cassette of the Red West phone conversation in October 1976, it remains fascinating to hear a small, unguarded moment with Elvis and his former friend and employee. Osborne also manages to date some interviews that have eluded other researchers, like the one with NBC Radio's "Happy" (apparently from August 8, 1956), which will please many Presley scholars. However, there are a number of flaws in "Elvis Word For Word" that go beyond simple oversight.

The numerous photos within are often incorrectly dated; at least four errors can be detected in the first fifteen pages, for starters. It doesn't improve from there. Even worse are misattributions of Elvis quotes.

For example, the "May 6, 1956" entry, featuring on stage comments from his closing night in Las Vegas, cites two statements Elvis actually made at a Houston concert from March 19, 1955! The "March 7, 1960" slot claims to be unedited text, but features a question and answer repeated verbatim. "August 1, 1969" comments should be assigned to the August 3, 1969 dinner show, as they are taken from the import CD 'Opening Night.'

Two glaring errors include "August 10, 1971" referencing Elvis' introduction of comedian Marty Allen and then singing a bit of Charlie Rich's "The Most Beautiful Girl." Rich's song hit #1 on the Billboard charts in December, 1973! Thus, the introduction of Allen likely comes from Jan/Feb'74 when Elvis next played the Las Vegas Hilton. Presley sung the snippet to Allen because the comedian was well-known for making fun of his looks and nest of curly hair.

Most prominent and inexcusable, given the story's notoriety, is Elvis' handwritten letter to President Richard Nixon being included in the "December 20, 1971" entry. Elvis visited Nixon on Monday, December 21, 1970, writing the letter the day before while in flight to Washington. There have been entire books written about this most famous (perhaps infamous) meeting; that a self-proclaimed Elvis "friend" and "expert" like Osborne could misplace this speaks poorly of the whole project.

Beyond such errors, one questions the necessity of printing again and again each time Elvis jokingly introduces himself as "Johnny Cash" or "Wayne Newton" or constantly quoting some of Presley's mundane "joke" band introductions. It is in this area, live on stage in the seventies, where Osborne is selective about the comments he prints. It would've been useful to know what criteria he used to include or omit statements. But as Bob Dylan once wrote, "Nothing was revealed." In some ways, it applies to this book as well.