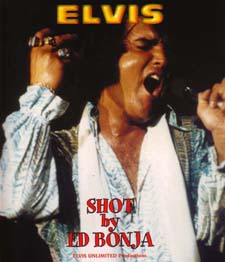 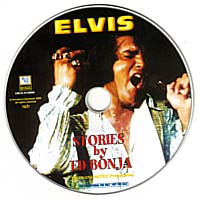 There are clearly lots and lots of Elvis Presley photo journals out there. The past 15 years in particular have produced any number of the good, the bad and the ugly. Astounding collections from the likes of Ger Rijff have enhanced our comprehension of the greatest singer of the twentieth century, and allowed us to struggle to make sense of his appearance in popular culture over 40 years ago. They're more than good. "Elvis Shot By Ed Bonja," new from Elvis Unlimited Productions, sadly, belongs in the last category.

Where to begin? On the plus side, the paperbound, 96-page book is wall-to-wall color, and even includes a short CD of "Stories by Ed Bonja." Inside, there are several pictures taken from the January 1973 Vegas engagement, which is neat to see, as there aren't many from that stand. Elvis' suits were too busy, but he was still thin as a rake and handsomer than ten movie stars. It's mostly downhill from there. Ed's not an especially gifted writer, so his lengthy introduction serves little purpose, his captions provide no insight. And if Mr. Bonja has better snapshots in his darkroom, after two books, we should be viewing them.

Here, dozens of images are out of focus, too dark or too light and many are quite unflattering. Based on the photos by Ed used on Presley albums and singles in the 1970's, in collaboration with Joseph Tunzi and this, it's evident that, as one of Elvis' "official" photographers, Bonja is several tiers short of talent. He's certainly well below the standard set by hard working "unofficial" shutterbugs like Keith Alverson, Bob Heis, Sue McCasland, Sean Shaver, Judy Palmer or George Hill. In fact, they captured some of the very same shows presented in "Elvis Shot By Ed Bonja," albeit with superior results!

Beyond the lack of image quality, the book's layout is trite and unimaginative (think Joseph Tunzi), photo dates are misidentified and there's even one photo on page 6 repeated again on page 46! This is sloppy work indeed. If "Colonel" Parker weren't dead, I'd swear he had a hand in this.

The bonus CD, amazingly, follows suit with the book. Containing just two indexed tracks of 0:28 and 17:07, one is Elvis on stage name-checking Bonja as "head of the luggage crew." What tour or show? It's not identified. The second presents Ed reflecting on his career with Presley and Parker. The recording of Ed's memories comes without edits, and we can note several pauses, "popped P's" and other audio crap that would normally be removed. A nephew of Parker's chief assistant Tom Diskin, Bonja worked with Elvis' management from summer 1970 to May, 1977, although he first met Elvis on the Hollywood set of "Girl Happy" in June, 1963 (gee, wasn't that 1964?) at a surprise birthday party for Parker "on June 25th" (um, shouldn't that be the 26th??).

After years of conjecture, Ed explains why Europe never had a Presley tour. Apparently, Tom Parker was "very concerned about the fans" in regards to security issues and the fact that the promoters would charge excessive ticket prices since they'd be paying so much for Elvis' services. Plus, it was all down to Elvis losing weight; once Presley dropped some fat, Parker would be packing their bags for England. Uh-huh.

Ed Bonja sounds like a nice, unassuming fellow, but as far as this book is concerned, as Bob Dylan once wrote, "nothing was delivered."