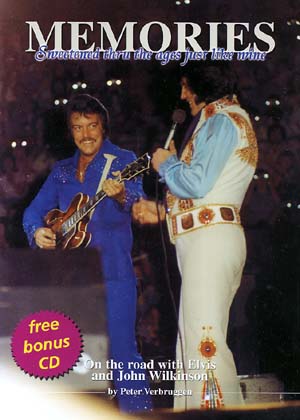 I was really looking forward to this one. After all, this is the first book by a member of the TCB band, Elvis’ 70s rhythm-section. John Wilkinson, his rhythm-guitarist since 1969, was one of only two members of the band that were present at all of Presley’s live shows between ’69 and ’77, so it’s only fair to assume that he has a lot of interesting insights and great stories to share with us. However, after reading the book, I had to conclude that it did not live up to my expectations.

‘Memories pressed between the pages just like wine...’ is the title of the book, and I suppose it’s true that one tends to remember the good and forget the bad. My only problem with this is that John’s recollection of his years with Elvis are so over-positive, that they tend to undermine the book’s credibility. In itself it’s quite admirable that John is so loyal to Elvis, but it certainly wouldn’t have harmed the book if it would have dealt with some of the delicate issues concerning Elvis’ life and career in the seventies. That horrible College Park show in the fall of ’74 is mentioned though, but John philosophically blames it on Elvis’ divorce, which I personally felt was a bit puzzling. Other things that went wrong in the final years are blamed on others, most notably Colonel Parker, whom John clearly dislikes (and with good reason).  Things like Presley’s tasteless comments to various bandmembers (for example in Norfolk in July ’75), his bizarre mid-seventies on-stage monologues (for instance during the Vegas Closing Show in September ‘74) or his drug-abuse are never even mentioned, and I really feel that the book should have addressed these issues. They are as much a part of the final years as the stories about his kindness and his generosity. There’s no doubt that the author and John are friends, but perhaps that made it difficult for Peter Verbruggen to ask any unpleasant and confronting questions?

Instead, the book emphasises repeatedly how loyal John was to Elvis, how close they were, and on and on. In an interview that you can read on this website, respected Elvis authority Ernst Jřrgensen paints a very different picture: “...Well, you’ve heard a lot of tapes from the period when Duke was with Elvis’ band. He gets a lot of stick from Elvis, as does John Wilkinson, where there seems to be a disrespect on Elvis’ side on both of them as musicians, which to me is unpleasant to listen to. He belittles both of them on the shows, and he had apparently less respect for them”. Taking  Jřrgensen’s observations into account, it’s difficult to avoid the impression that Verbruggen’s book is an attempt to rewrite history. While reading this book I was reminded more than once of Charlie Hodge’s “Me ‘n’ Elvis”, another very bland book with the sole purpose of glorifying and over-romanticising the subject’s relationship with Elvis. It’s a bit ironic that someone like bass-player Duke Bardwell, who was a part of Elvis’ band for just a year, has given us far greater insights about Elvis and life on the road in only one interview, than John does in a whole book (I’m referring to Trevor Cajiao’s superb 1996 interview with Duke).

I realize that it is unrealistic to expect that a book is completely free of errors, but I did find it noticeable that several bandmember’s names are spelled incorrectly, like for instance Shane Keister’s (page 131), Larry Muhoberac’s (page 129) and Marty Harrell’s (‘Marty Harold’, page 117).

It’s also incorrect that John is “the only bandmember that ever sang in an Elvis show” (page 101): Duke Bardwell sang and played ‘Please Don’t Bury Me’ on stage in Lake Tahoe in October 1974. Speaking of Bardwell, I noticed that the text about him on page 127 was taken word-for-word from Ernst Jřrgensen’s ‘A Life In Music’ (page 388), and yet this is not mentioned anywhere: no credit, nothing. Ho-hum......

On the plus side it has to be said that there are several interesting documents and contracts relating to John’s years with Elvis. Of particular interest is a set-list from the May 1974 tour (wrongly dated as coming from May 1975) on page 42. One of the songs listed is ‘You Can Have Her’, which clearly proves that the live-version from May 11th, 1974 was not improvisation as previously thought. Cool!

There are also quite a few newspaper clippings (mostly concert reviews), which are fun to read. A shame though that it’s very difficult to read them without the help of a magnifying glass, as most of these clippings are printed in a rather small size. There’s also a generous amount of photographs, all of them in black & white (with the exception of the cover).  The ones featuring Elvis are “snapshot quality”, with the majority of them coming from 1976. While leafing through the book it was hard not to notice that many of them are quite unflattering, with Elvis’ weight-gain and his general deterioration being very obvious. But photographs like that are also a part of the Elvis story, even though EPE still has a great deal of difficulty dealing with that simple fact.

The enclosed CD is nice but unremarkable. A couple of folk demos featuring John, as well as some live material, including two poor quality live-versions of ‘Early Morning Rain’ as sung and played by John during Elvis shows.

This book does have some things going for it, but in my view it has some flaws that make it hard to  just recommend it without reservation. I suppose that it all depends on your own outlook at Elvis. If you prefer the type of books that view Elvis through “rose-tinted glasses”, then you won’t be disappointed with this one.

(with special thanks to Peter Haan, It’s Elvis Time)