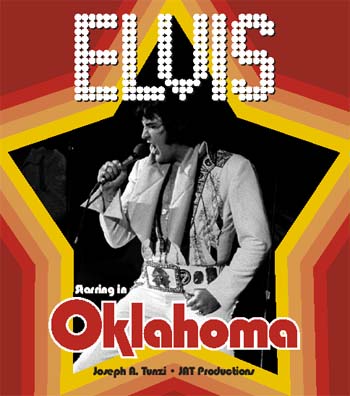 JAT Publishing has been quite productive during the last three years with a third version of his Sessions book, smackers on Elvis’ documentaries from 1970 and 1972, Elvis As The One Called Charro and Hawaii 61. JAT Publishing’s latest publication Elvis Starring in Oklahoma is a book featuring ninety-five ( 95 ) photographs from the opening show of the July 1975 tour. 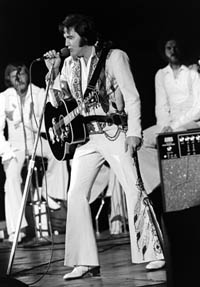 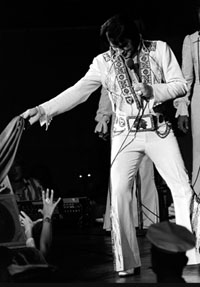 All the photography work features in Elvis Starring in Oklahoma is from George Wilson. This is possible the name of George Wilson won’t mean anything to several fans or  perhaps you simply don’t remember as some of his photographs from the Oklahoma City concert of November 16, 1970 were presented in JAT Publishing’s Bringing Him Back . Mr. Wilson was working for Oklahoma Journal at the time and was later inducted into the Oklahoma Journalism Hall Of Fame .

The year 1975 was overall a good one for Elvis when compared to the last quarter of the previous year. He was in good spirit and sounded like he enjoyed himself on stage, and indeed many of the soundboard recordings available to us just proved that. The July 1975 tour was certainly an excellent one with great performances in Richfield, OH, Greensboro, NC, both Uniondale, NY concerts and the three famous gigs in Asheville, NC. The latter performances were definitely above average although the whole tour is known to be very good, and most definitely a notch over the previous tours in the Southern States. 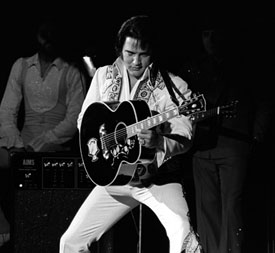 You can see throughout the book Elvis looked quite good when he kicked off the July 1975 tour in Oklahoma City although he gained a little bit of weight around the waist when compared to June. Indeed his face looked a bit younger, and certainly due to a minor plastic surgery around the eyes done in-between both tours.

The book Elvis Starring in Oklahoma is basically a pictorial experience as there is no text as such. On some pages you have some quotes from the original review published in the Oklahoma Journal in 1975, and the said review being reproduced on page 94 in the book. On page 95 you have a listing of Elvis tour dates for 1975, and the set list for this concert at Myriad Convention Center on July 8, 1975 on page 4.

Elvis Starring in Oklahoma was nicely designed by Jimmy Carpenter as he put in evidence the beautiful photography of Mr. Wilson. This work does not feature any colour photographs since all were taken in black and white, yet their quality makes it up for the lack of dish. All the photos are somewhat spread inside the book for simulating the whole show in illustration. It worked as this is the impression you get when going through the pages. All the photographs were new to my eyes excepted for the one on page 34, which was reproduced in a Strictly Elvis magazine of the time, yet probably reproduced from the newspaper since the quality was below par from the ones found in this work. 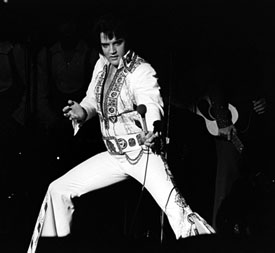 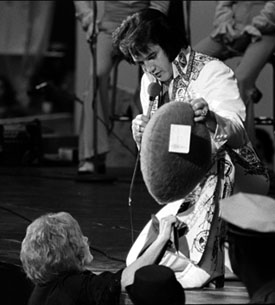 If you are someone who gets bored easily with loads of pictures from the same show, or simply not a big fans of concert shots, then Elvis Starring in Oklahoma won’t be your cup of tea. On the other hand, if you like to collect concert photographs and fans of concert photo books then this new quid is for you.

Oh… and the book came with a free 2007 pocket calendar that perfectly reproduced the ones done by RCA and Colonel Parker up to 1974 or 1975. RCA was replaced by JAT on the calendar side while the front side features a colour photograph of the June 17, 1972 evening show performance in Chicago, IL. Very neat idea as it definitely brought back some good memories since I was collecting them back then.

Sergio Luiz from the Brazilian site Elvis Collectors Brasil put up recently an interview with Joe Tunzi on their website at http://www.elvisbrasil.com/epbrasil/jtinterview.htm .

You can also find our most recent interviews with Joe Tunzi in our Interview Section .