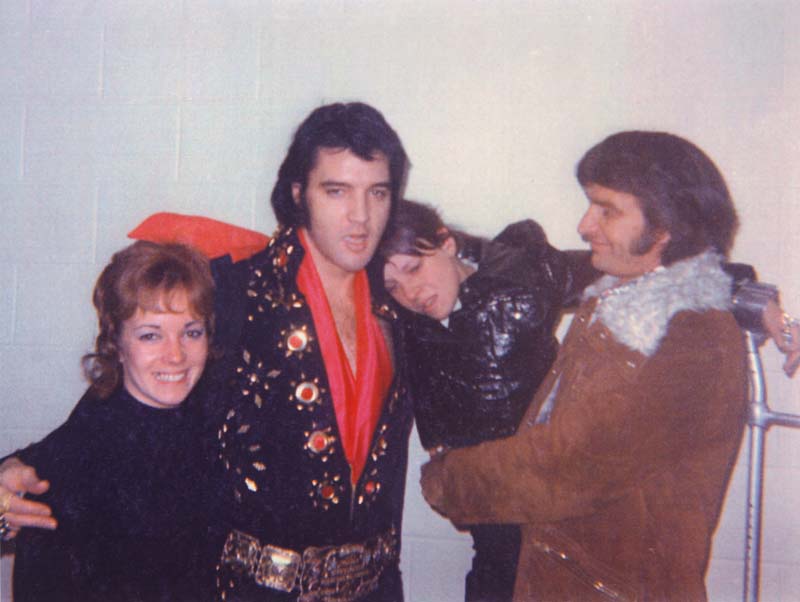 This photograph was taken backstage at the Boston Garden on November 10th 1971, and there's a nice story behind this event . The little girl held by the man is Lise Thibodeau with her sister Danielle and Tom Hulett from Concert West.

Lise never expected in her wildest dreams to see Elvis in concert, and much lesser to meet him. Several fans made the trip from Quebec City to Boston for attending Elvis' concert there. Danielle brought her sister near the stage and try to find a spot where she would enjoy the show. The security didn't want her to remain there although Lise wasn't able to use her seat in the 27th row on the main floor because of her condition.

Colonel Parker noticed the incident and asked to Tom Hulett to take Lise in her arms and to follow him. Danielle thought they were going backstage for resolving this matter, and were in no way prepared for what was about to happen. When they arrived backstage Colonel Parker opened a door and both women got shocked when they noticed Elvis was behind it.

Lise started to cry and never stopped until the meeting was over. Elvis gave her a red scarf and tried to comfort her. Unfortunately Lise and Danielle were barely able to speak English, and Elvis realized rather fast it was impossible to communicate with these two fans. Someone arranged for the photographs to be taken and while doing this, Elvis started to sing a song in a very low and soft tone. I guess he somewhat hoped Lise would calm down a little. They were really excited at that moment and none of them were able to identify the song.

After the meeting Lise and her sister returned in front of the stage, and a remained close to the stage for the show. Lise had several health problems and passed away in the early eighties.

You can see pictures of the show on page 1971-1 and a review of this concert with extra photographs.