On Sunday, September 13, my girlfriend, Eve and I went to Curtis Hixon Convention Center, here in Tampa, where Elvis was to appear at 3 and 8 p.m. It was two hours until show time but, already, there were hundreds of people in line waiting to get in. About two o'clock the doors were opened and we were allowed inside. Eve and I bought an Elvis poster and photo album and then went to find our seats. We were really surprised to find how close to the stage we were. The auditorium started filling up and by three o1clock there wasn't an empty seat in the house. Almost everyone there either carried a camera, tape recorder, or a movie camera.

Finally, after what seemed like hours, the show began. First there was a group from the International Hotel, then a male singing group, then the Sweet Inspirations, and finally, Sammy Shore. Then came a fifteen minute intermission. 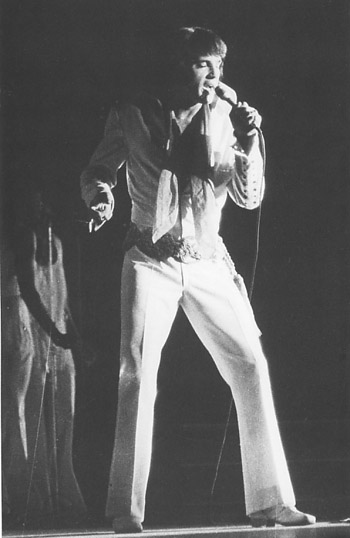 At last we were all asked to find our seats and all the lights went out -- that is, all except one spotlight on the entrance to the stage. The band began to play and suddenly... there HE was ! Not like I had ever seen him before but, much more magnificent! I couldn't believe that it was really Elvis. . but it was. He was dressed in an off white jump suit open to the waist, and across the front were four chains. He wore a red scarf around his neck and on his hips a brown belt. It hung almost to the floor and on each end was a tassel. Along the sleeves and down the side of the suit were tiny buttons. There were dark  blue or black inserts in the pany legs.

Elvis picked up his guitar and strolled to the center of the stage. He took hold of the mike and broke into " That's All Right Mama, “ and " I Got A Woman. " Then he introduced his next song by saying, " This was one of my first songs, and the title song from my first movie. “ He then sang “ Love Me Tender. “ Somewhere in here Elvis teased us by saying, "It sure is nice to be here in St. Petersburg. Everyone in the audience had a fit and Elvis corrected himself by saying, " I mean Tampa. “ After that he said, " Here's my newest song " and went into " I've Lost You.” Next he sang, “ You’ve Lost That Loving Feeling.” Then a familiar beat started up and we recognized " Polk Salad Annie. “ Elvis started the song with " Some of you never been down south too much. . .. HA! That ‘s silly . - you live down here. Down here, we have a plant, . .. “ When he got to " Now That's Polk.. .. Salad... “ his hips started moving and didn't stop. He repeated this over and over again saying, "Again for Polk…. Salad. . . .” Each time his hips moved wilder and faster than the last. Suddenly he stopped and just layed down on the stage. He talked for a bit and then got up and introduced The Sweet Inspirations, and " My favorite guitarist, James Burton. " James started playing and we heard "Johnny B. Goode. “ Afterward, Elvis introduced everyone else.

When he finished he took a glass of Gatorade and held it up for us to see, saying, " Thought my gator needed aiding." Then he studied the glass for a minute and said, " They say this stuff works 12 times faster than water, so if I suddenly run off stage, you'll know why, “ He then walked over to Charlie Hodge and pretended to get mad at him He said, "You get more screams than I do. Get off stage. " Elvis then said, "In 1912 1 recorded a song called "Heartbreak.Hotel. “ We all screamed, but instead of singing it, Elvis stood with his legs apart and bent down to look at them. Then he said, "I'm watching the sweat drip off of me. “ After " Heartbreak Hotel, " Elvis sang "The Wonder Of You. “ After he finished he started to walk to the other side of the stage when a bunch of girls on our side yelled " We Love You." Elvis stopped, turned around, and said, " I love you, too. “ Everyone started calling out different songs they wanted him to sing so Elvis said, "Don't worry, we'll get to all of them. “ 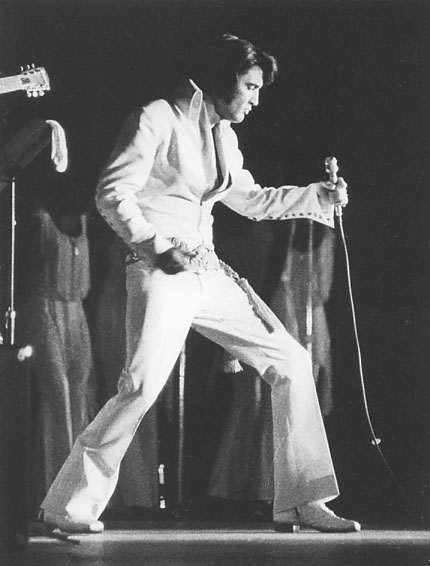 El started a song, but only got as far as " Well... He kept repeating that and then said, " I've recorded 500 songs that start with 'well' and James Burton is back there saying “ what's he gonna do? What's he gonna do? " After teasing James, Elvis sang "Heartbreak Hotel" and a medley of " Blue Suede Shoes, “ and "All Shook Up. " After the medley, Elvis sang "Don't Be Cruel" and then announced he was going to do " One Night. " Everyone screamed. After a fantastic performance of this number, Elvis bent way over and said, "You have to lean way over like this to start the next song or you'll strip your gears. “ Everyone who had read any articles on Elvis in Las Vegas knew we were going to hear "Hound Dog. “

Next came the most beautiful version of " Bridge Over Troubled Water. “ After this, he sang his now famous version of " Suspicious Minds. " Elvis gave this song everything he had -- and more. Elvis started moving wilder than he had during the entire show ! Then he put the mike down on the floor and all the music stopped except the drums. It was only Elvis and the drums and he moved and moved ! Faster and faster to the beat of the drums. Then, without stopping for breath, he went right into " Funny How Time Slips Away. “ During this song he bent over and took a policeman's hat and put it on, saying, " I've joined the police force. “ He looked absolutely darling.

He then went over to the piano and asked Glen Hardin, "How do you do that? “ Glen quit playing the right hand and let Elvis take over. After that he gave the policeman back his hat and finished the song. Again he told us we were a fantastic audience and sang " Can't Help Falling In Love. “ When he finished, he quickly left the stage.

The evening show didn't start until 8 o'clock, but Eva and I were there at 6:30. This show was basically the same as the one in the afternoon with the exception that Elvis added " In The Ghetto. "

This time he was in a white jump suit. It was made almost like the one he wore at the 3 o'clock show only there were no chains across the front and there were no inserts in the pant legs. He wore an orange scarf and an orange belt. This time, the belt hung only to about his knee.

After " I Got A Woman, “ Elvis said " My name is Johnny Cash " and sang a few lines of one of Cash's songs. Then he showed us a little red guitar and told us that it was his first guitar and how he started out as a little bitty boy with little bitty sideburns. Then he said, " I was doin' things when I was in diapers that Tom Jones is just learning how to do.” This drew a great cheer and applause from the crowd.

When he was trying to get " Hound Dog, “ girls kept yelling things like " You're beautiful. “ Elvis acted like he was getting disgusted with them, and then he just laughed. Later, when everything was quieter, I yelled " Elvis. “ He burst out laughing. During " In The Ghetto, " he sang ' a runny little boy with the hungry nose ' and broke up in fits of laughter. He said, " Let's get serious " but he cracked up again. Finally he did get serious and finished the song. After " Ghetto, “ he said, " I have a new song out. It's called “ I've Lost You. “ Then he looked around and said, " I've Lost It... or something. “ He drank some Gatorade and then started to sing, but only got through the first sentence or so because he started to choke. He told the band to wait a minute and then said, " There must have been a live gator in there. " When he stopped coughing, he told the band to "Take it again. “ 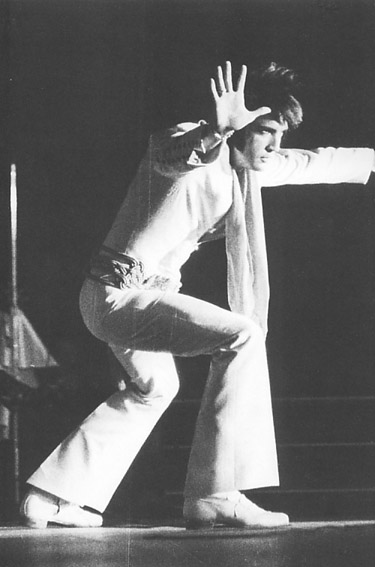 After introducing everyone and singing " Johnny B - Goode, “ Elvis told us his grandmother was in the audience. . . " I can't see you, but I know you're there.” Then he told us, " She's only seen me perform live twice; once in Las Vegas and she drove 800 miles here to see me. “ This drew a fantastic applause from the audience.

After he sang "Heartbreak Hotel" and " The Wonder Of You, “ Elvis looked down at the floor and saw an orange folder that someone had placed there. " What's this? A script? “ he asked. He knelt down on one knee and spent a couple of minutes just looking through the folder.

During "Suspicious Minds, “ Elvis went over to the Sweet Inspirations and either tickled or gave a friendly punch ( I'm not sure which ) to one of the girls. He laughed and jumped away from her. While singing " Funny How Time Slips Away, “ Elvis once again took the policeman's hat and a girl managed to get to the stage. Elvis took her hand and held it before the police pulled her away. Colonel Parker was standing by the right side of the stage while El sang " Can't Help Falling In Love. “ Elvis saw him and went over to where he was standing and patted his head.

Seeing Elvis in person is something that everyone (and I mean everyone) should experience. I never thought Elvis could ever look any better than he did in movies... it seemed impossible. But, in person, W-O-W! !

Originally published in the magazine Strictly Elvis  No. 31