Elvis Gets It Together In Miami

I saw King Elvis do his thing "LIVE" onstage, September 12, 1970 at beautiful Miami Beach Convention Center. It was complete pandemonium! Both 3 pm and 9 pm shows were sell-outs of 12, 000 people... mostly hip, young people. The show was to start at 3:00, so we got there at noon. As did many others, we waited in line until 2:30 when we were let inside. The time passed fast as we watched the crowds demanding to buy an Elvis photo album or a large Elvis poster. These were selling like there was no tomorrow. A 92 degree temperature kept the ice cream and soft drink concessions busy. 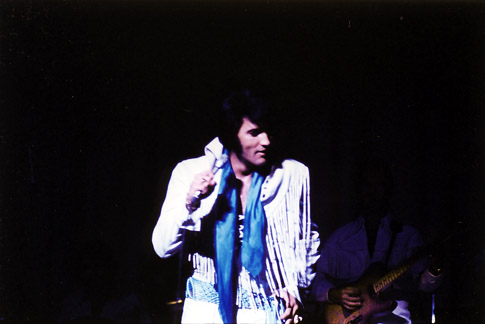 In the first half of the show, The Sweet Inspirations did three great numbers. They looked great in gun metal colored pants suits with gold bracelets and neck touches which flashed in the spotlight. A male singing group next sang three songs... then Sammy Shore (Elvis' favorite comic) came on. He lived in this area for seven years. The 35 piece Joe Guercio International Hotel Orchestra were superb in their backing. Elvis' super-terrific 6 man rock combo is sensational. These musicians give out with the loudest, heaviest rock sounds to back our King of Rock as he comes onstage... and throughout the show. The screaming for Elvis was fantastic. It never ceased. He kept the audience laughing when he wasn't singing. My throat and ribs attest to the fact I was among those screechers.

Wow, what a show. Elvis' musicians and back-up singers literally wrap him in a solid wall of waves of rhythmic sound. The P.A. system is the best in the world as Elvis carries with him his own sound men, stage crew, light technicians, and others.... all traveling in a jet airliner on this six city tour. Since his whole tour was a sell-out, with extra shows in some cities as he did in Vegas closing night, by public demand. Elvis wants to do another USA tour soon. He also has asked his promoters to set up a European tour for 1971. Elvis is scheduled to return to the International Hotel in 1971. Why not? His recent four week stand there surpassed even his previous two history-making appearances. When Elvis is in Las Vegas, the whole town picks up. As one executive put it, "Elvis continues to break his own records.... a sell-out crowd, every show, every night. Elvis is the only performer thus far to fill this huge International Hotel showroom and balcony as well... every night, every show, turn away crowds. " On tour, Elvis' security protection is tremendous. Guards watch over him. 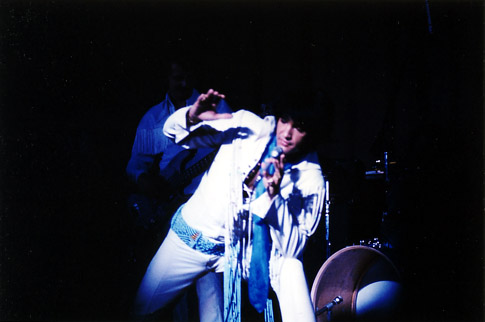 Elvis dressed in his beautiful white jump suit, heavily beaded collar, light blue fringed wide beaded sash, light blue scarf, long hair... he looked really OUTASIGHT! His singing voice was never better. He vibrates from head to toe... It drives you wild ! He sang about 18 songs, mostly his own hits. I would say the smasher was his frantic version of " Polk Salad Annie. " He got the crowd in a real blow-your-mind state. Oh what a showman, this Elvis. " Wonder Of You, " " I've Lost You, " plus all the rocking things were merely GREAT! His dancing at the end of " Suspicious Minds " is a show stopper for sure. He is in loose, swinging shape. Elvis has made " Love Me Tender " into a regular part of his act and its great. He kisses the girls in the front row at the International Hotel in Las Vegas. Here, the stage was too high, so he kissed hands. Many outstretched hands reached for Elvis. He sings his heart out for his fans and how they love him. Go see the world's number one and ONLY entertainer... ELVIS IN PERSON. If you aren't a fan, you will be. If you are a fan, you will be a bigger one. For here is a super, super star. Elvis is indeed, THE KING!

Originally published in Strictly Elvis No.31