(note: This is not a concert review as such but since we had the pictures of this meeting, we thought it would still be of interest to our readers)

In September of 1970, three girlfriends and myself went to Mobile, Alabama to attend an Elvis concert. Upon arrival at our hotel, we began questioning various hotel personnel as to where Elvis might be staying. From all indications, we decided to try the Admiral Semmes Hotel.

Waundering in the lobbys we met a couple of guys only to discover they were pilots employed by Frank Sinatra's private airline. They had also flown the Colonel to Mobile. The pilots told us at what time Elvis was expected at the hotel and at what entrance. 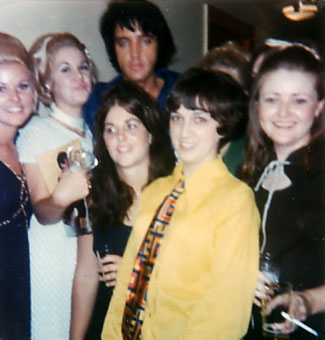 Mikki Malbrough © Elvis and the girls at the Admiral Semmes Hotel in Mobile, AL.

Waiting at the back Elvis' arrival entrance to the hotel for we met Sonny West and Richard Davis. We were talking to them when our attention was diverted by a limousine which was pulling up to the back entrance. At the same time, a yellow car drove up. No one paid any attention to the car as we were busily taking pictures of those people getting out of the limousine. In fact, I leaned against the yellow car, using it as support while I took movie pictures of those in the limousine. Needless to say, Elvis was in the yellow car and entered the building without any of us knowing. After Elvis had successfully entered the building, we were told by Sonny West of the diversion and entrance. However, I was not discouraged by the fact that we had missed Elvis for I now knew where he was staying.

We then returned to our hotel room to dress for the concert. Anxious and apprehensive, we dressed early and decided to go over to Elvis I hotel and wait for him to leave for.,the performance. When we arrived at the hotel, we discovered that others had learned where Elvis was staying and were waiting at the back entrance.

As the auditorium was within walking distance of the hotel, we waited until 15 minutes before the concert. Afraid of missing Elvis perform even one song, we left... . thinking that he probably left from another entrance. ( Later we learned that a few who waited did get to see him ).

About the performance, I will not go into detail as I am sure you have heard many accounts and mine would just be redundant with praise for Elvis and details of my excitement.

After the concert, rather than battle traffic, we ran to the back of the hotel. But Elvis' car was already parked near the back entrance, indicating that he had entered the hotel already. At this point, discouragement would have been the key word, but we decided to go into the lobby, just in hopes that. . . Entering the lobby, it was quite obvious that many fans had the same idea we had. So together we all waited for a possible glimpse of Elvis. We hoped he would come down to the lobby, yet we knew he never would. Seeing numerous band members, the Sweet Inspirations, Sonny West, Richard Davis, Ronnie Tutt, Colonel Parker, James Burton, and the guards at the elevator made the tension even greater. 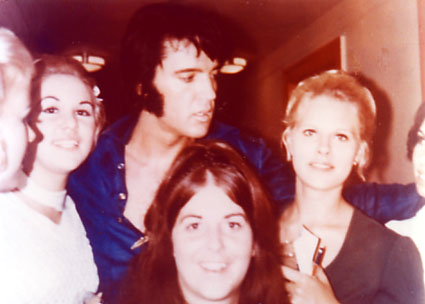 Mikki Malbrough © Another shot of the girls at the Admiral Semmes Hotel in Mobile, AL.

Finally, at approximately 12:00 midnight, we decided to give up as all seemed so fruitless. As we were leaving the hotel, Red West and Richard Davis walked out of the elevator and I decided that I would go over to them and get their autographs. I told Red West that I recognized him in a number of Elvis' movies in which he played an extra. I then asked if he would oblige me with an autograph. My friends then joined us and we all received autographs. Conversation began and one thing lead to another. We discussed the fact that there was no activity at our hotel as practically everyone was here. Then, as the conversation progressed, Red West asked if we would like to join him and Richard Davis at a champagne party in Elvis' hotel suite.Well, stunned and dazed, we accepted, still not really believing. With Richard Davis and Red West, we were allowed in the elevator. We reached the 12th floor and Red West directed us down the hall. Before reaching Elvis' suite, Red West warned that there would be no pictures and no autographs and he said, "Just act like a guest. "

At this point, I don't think I have to explain the state that my mind, body, or nerves were in. I am sure you know. As we entered the room, a number of the guys stood and offered us their chairs. I accepted as my eyes scanned the room nervously, never really expecting to see Elvis. But there he was deeply engrossed in checking off something on a yellow piece of paper. I later saw this paper and it included the names of the "Memphis Mafia" and dollar amounts behind each name.

Elvis was wearing a two-piece royal blue suit, which resembled a jump suit as the jacket was cut to the waist and laced half -way up with a leather string. Outwardly I sat very calm, but only for a few minutes as Elvis, upon noticing that we had entered, began walking toward us.I stood. I did not approach him, scream or call out his name as I may have expected myself to do. I just waited. He then came to where we were, said hello and a conversation began.

Below are bits and pieces of the conversation:

... Elvis remarked that the auditorium was extremely hot.

... He said he forgot to throw his scarf to someone in the audience.

. . . Elvis said that he ran off the stage through the wrong exit, something he had never done before. When he realized what had happened, he was in a panic. He was all alone. There weren't any guards around. He was about to go back on stage when the guards located him and rushed him out of the building. He said he had visions of millions of girls attacking him.

... When asked if any choreography was used in his dancing, he replied, " I do what the music makes me feel."

... Elvis said that James Burton was the best guitar player he ever heard. This remark came about after James Burton had walked over to Elvis and thanked him for a great tour and great experience. ( This was the last night of the tour ).

... It was also extremely warm in the suite as the air conditioning was not working. Elvis said that they stayed at that hotel because the manager was a friend of the Colonel.

... He spoke of Tom Jones and Engelbert Humperdink and said that he admired them and they were good friends.

... While we were there, Elvis' food arrived. He had ordered hamburgers and potato chips.

Mikki Malbrough © Elvis posing again outside of his suite at the Admiral Semmes Hotel in Mobile, AL.

... At one point, a bottle of champagne was opened. The cork sounded loudly and the security guards rushed to Elvis' side. Elvis laughed and said, "Hey guys don't worry, it was only a champagne bottle. " Then he said, " Kind of scared me for a minute too.

... During the course of the evening, Elvis lit a cigar. After he had taken a few puffs, I asked if I could have the cigar. He gave it to me without hesitation. As the cigar was still lit and I had no means of putting it out, I began laughing. He turned to me and asked what was so funny. I explained that the cigar was still lit and that eventually it would burn my fingers. He too laughed, took the cigar from me, walked to an ashtray, put the fire out, and returned the cigar to me.

.. . While we were talking, I was standing against the wall with my hand on the back of the chair next to me. As Elvis was also standing when asked for his autograph he placed his foot on the arm of the chair to enable him to use his leg as support to write on. When he finished signing the autographs requested, he placed his hand against the wall to steady himself on one leg. When he did this, his hand and arm encircled me on my right and his leg and the chair encircled me on my left. At this point, I could not let the opportunity go by without asking Elvis if he would pose with us for a picture, even though I had been told not to.

When I asked Elvis to take the picture with us he leaned forward, his face next to mine, and looked directly into my eyes and said he looked bad that night but he would take the picture if I wanted one. When he said this, his hair being long fell in his eyes. I reached up and brushed his hair aside. When I did this the impact of his eyes so close made me go limp, causing me to spill my champagne all over his leg that was on the chair. A little tense, fearing the reaction, I looked to Elvis for a response while apologizing for what I had done. Elvis then looked at me and said, " Honey, would you like another glass of champagne? " At this point, I smiled and he took my hand and led my friends and I to the hall where the pictures were taken.. He called one of the guys and asked him to take the picture in order for all of us to be in the picture. The picture of the kiss resulted when I thanked him for posing with us. 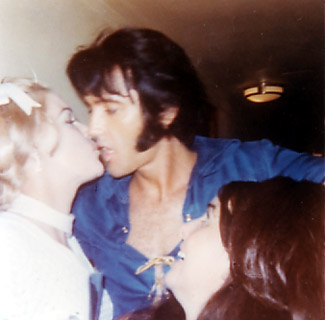 As it was almost 3:00 a.m., we decided it was time to leave. When my friends and I entered the elevator, we looked at one another and spoke to each other for the first time that night and finally put into words what we still could not believe had actually transpired. WE HAD MET-ELVIS! When we reached the 1st floor and stepped out of the elevator, we noted that there were still many waiting with their hopes of seeing Elvis. When we told them where we had been., many were skeptical... .. but luckily I had my polaroid pictures, cigar, and champagne glass ( You can see Mikki holding the champagne glass on the first picture at the top ) to prove to them, and more so to prove to myself that I had actually been there.

Originally published in Strictly Elvis No. 60