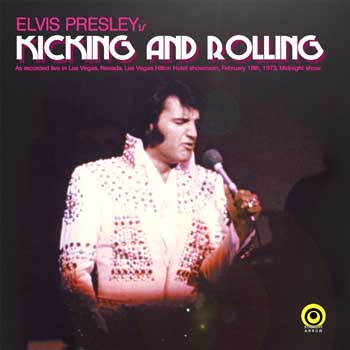 This latest release by Straight Arrow is an audience recording of the Las Vegas midnight show from the 18th February 1973. Although this show has been released before, under the title’ I’ll Whoop His Ass,’ this version has far superior sound quality as it is taken from an early generation copy of a ‘booth recording.’ Apparently, these recordings were made by someone either in or related to a member of Elvis’ organisation with tacit approval and therefore offer the best sound quality.

This show is from a difficult engagement for Elvis, which is well documented inside the excellent 16 page booklet. From the outset it seems he suffered from a throat condition with flu like symptoms which later caused him to cancel several shows. On the 15th February he even left the stage for 20 minutes during the dinner show as his voice was so hoarse. The show featured here, was performed just three days later and still bears testament to these problems. In addition he had the indignity of being threatened by four men of South American origin who leapt up onto the stage during his show, causing him to fell one with a karate kick, before security intervened. The booklet also features many photos from early 1973, though sadly none from this particular show.

The sound quality is indeed very good for an audience recording, though it’s not quite as good as the ‘booth recording’ included on the first Profile box. This had the advantage of being in stereo and was very likely sourced directly from the mastertape, rather than a mono early generation copy as featured here. Don’t be put off by this observation though, because it’s still a first rate recording which you can turn up loud to fully enjoy the live experience.

From the start it is apparent that Elvis’ voice is hoarse, clearly indicating he had not yet recovered from his ailments. His voice sounds weak at the start of I Got A Woman which also includes one line of Big Boss Man, sung at the conclusion of the Amen chorus. Love Me Tender follows this, with excited shrieks and laughter from his ad-libs captured in ever greater clarity on this recording.

You Don’t Have To Say You Love Me is quickly followed by Steamroller Blues where he sounds much better, but his problems intensify during You Gave Me A Mountain where his voice fails him, requiring several attempts to reach the final notes. Afterwards his band immediately start the opening riff to Fever, which Elvis ignores, launching instead into a reprise of the ending, plainly conscious that his previous attempt was poor.

Fever is performed next, although he misses his cue with the remark, “I’ll follow you son, just…” However when he does start singing, his voice sounds painfully weak but still results in an entertaining performance, with added interest provided by the great audience atmosphere.  At the end he prolongs it by repeatedly shouting out “Fever,” prompting numerous violent drum breaks.

He then introduces a medley of songs beginning with Love Me, to increased overexcited shrieks, no doubt due to his scarf giving antics. Following this is Blue Suede Shoes which really rocks, with Johnny B Goode showing James Burton to be in unsurpassed form. His vocal problems are again evident during Hound Dog, where he can hardly be heard during the faster version and ends with a ‘Hot Damn’ exclamation just before the final line.

What Now My Love is performed next which is surprisingly good, given his vocal condition. As expected he doesn’t quite manage to reach the ending notes, but frankly it is nothing short of amazing that he manages as well as he does. On Suspicious Minds he again struggles to be heard, leaving his backing singers to carry the song which is later given recognition with the ad-lib, “Don’t let a good voice die,” during the slow section. At the end of this song, there is a series of extremely violent drum breaks, often indicating a karate demonstration. If this was the case, it may have been useful, or even the instigation for what follows.

For it is at this point that the would-be assailants make their move, which results in 2½ minutes of horrified crowd reaction followed by applause and laughter, as they are suitably dispatched. Throughout the whole proceedings the band play on regardless, which ends with Elvis remarking, “ …Sorry I didn’t break his god-damned neck.” Strangely, the first part of his audience address (“I’m sorry ladies and gentlemen ….”) is missing from this recording, whereas it can be clearly heard on the previous release of this show. He then continues with the immortal quote, “If he wants to shake my hand then fine, but if he wants to get tough I’ll whoop his ass.”

I Can’t Stop Loving You follows without further ado and proves to be one of the best performances this evening, no doubt fuelled by the adrenaline rush from earlier events. American Trilogy is sung after this, where he sounds hoarse again, particularly on the opening refrain. This is followed by his closing address, where he simply says, “If we made you happy, then we did our job,” before continuing with a final heroic effort on the ending of Can’t Help Falling In Love. The recording ends during the closing vamp, missing both the souvenir announcements and the reminder that Wilson Picket and Connie Francis were playing nearby, which were included on the previous release.

As the show was relatively short (48.21 minutes), five bonus tracks have been added from other ‘booth recordings,’ to fill out this CD:

First of all we have See See Rider, which is not taken from the closing show on the 23rd February as advised. This can easily be proved from Elvis’ ad-lib, “You woke me up Ronnie,” which is not present on the version from that show. However, it proves to be a satisfyingly high energy performance…perhaps from the dinner show that day?

A great version of Steamroller Blues is next, which really rocks and features another excellent solo from James Burton. This purports to be a stereo recording, but if it is, the separation between the channels is minimal and you would never know it. You Gave Me A Mountain follows this, with Elvis sounding very vulnerable and hesitant at times. Although both of these inclusions are stated to come from the midnight performance on the 22nd February, the sound is not as clear on this last track.

Likewise Fever is not from the closing show on the 23rd as stated, because once again the ad-libs are different, whilst the version of What Now My love is unmistakable so. I have already commented on this performance in detail during my review of the show in question (issued under the title: What Now My Love); suffice to say it is an extraordinary and unique performance. However, it remains disappointing that the full reprise is not included here, as the recording simply fades out in the middle of the proceedings. Was the tape damaged or is this sloppy editing?

In conclusion, it should be obvious that this was a difficult show for Elvis. Not only was he still suffering from laryngitis for this performance, but he was also the victim of an embarrassing incident…though by all accounts he acquitted himself well. For me, the main purpose of an audience recorded show is to allow an insight into the atmosphere of the occasion and this recording proves exceptional in this regard. In addition, the extraordinary events that unfold here are simply unique, which in my view make this an interesting and worthwhile addition to any collection.