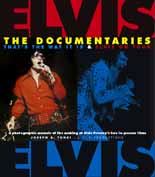 We received recently the new book from J.A.T. Publishing titled Elvis The Documentaries. Joseph Tunzi has put together a beautiful 136-page photo journal that will take you into Elvis Presley's two acclaimed documentaries, including That's The Way It Is, and Golden Globe winner Elvis On Tour. His latest book comes with a soft cover and pretty much in the same vein as ‘’ Standing Room Only ‘’ quality wise.

From the start I thought it was a great idea to have a book on these two documentaries. We did get one from FTD on the movie ‘’ That’s The Way It Is ‘’ but the concept was somewhat different. The latter also provided some information albeit the picture section was basically a ‘’ collection of photograph ‘’ in no particular order and undated as such. The last project from J.A.T. Publishing has all the pictures dated and in chronological order, which in my book is a big plus and makes it very interesting. On top of it Elvis The Documentaries is quite complete as it covers a lot of grounds on both subject, and very accurate too as far as dating photographs is concerned.

This project contains about 228 pictures, some memorabilia pages, documents related to both movies, details on the studio sessions, rehearsals, live recordings and filmings of these two documentaries. The text part  is similar to '' Sessions III '' in its presentation and has been updated. Obviously the changes into this section aren’t major, yet the biggest changes come into the information on what has been filmed. Several performances filmed weren’t included in ‘’ Sessions III ‘’ and now featured into this book.

The layout of the book is different than previous books from J.A.T. Publishing and overall quite nice I may add. The book layout and design was done by Jimmy Carpenter, and in my view did a great job on this. There's also some additions to the book since it contains a nice unpublished publicity photograph from the movie '' Change Of Habit '', Elvis' last film before doing '' T.T.W.I.I. '' . The section on Elvis' first documentary  is about 64 pages and features photographs from all the rehearsals and all the shows up to August 14th, 1970 midnight show excepted for the August 13th, 1970 midnight show. This section is completed with photographs of the first show of the September 1970 tour in Phoenix, AZ.

The '' Elvis On Tour '' section also features  numerous pictures taken during the filming of this project. There are shots from different locations such as Hampton Rds, VA. evening show, Richmond, VA, Indianapolis, IN, Greensboro, NC, Macon ,GA ( both shows ), Jacksonville, FL ( both shows ), San Antonio, TX, Albuquerque, NM and finally some from the August 4th, 1972 opening and August 5th, 1972 in Las Vegas. This is also a nice addition to have some pics taken in San Antonio, TX on April 18th, 1972 while the crew is setting up for filming the show that night, including a few shots of filmmaker Pierre Adidge on the stage.

As an example many fans wouldn’t be able to recognize a picture taken in San Antonio, TX versus others taken at the evening show in Macon, GA, and much lesser others in the same stage outfit from the Roanoke, VA concert, now they will be able to note the differences. Some fans wouldn’t care for such details but it has at least the merits of being done right. Personally a picture book with nice photographs wrongly dated is a big turn off, and on this matter Elvis The Documentaries was carefully researched. I wished we had shots from every concert of the April 1972 tour but sometimes what we hope for isn’t always possible.

Elvis The Documentaries contains some pictures we have seen before but fitting perfectly into the concept of this project, the front cover shot used on the album '' That's The Way It Is '' being a good example here. However while thumbing through Elvis The Documentaries a lot of captures are seen for the very first time, and nicely reproduced on a good quality glossy paper. The color section at the end has photos from both projects, and no doubts it would had been nice to have a bit more in color although many were strictly taken in black and white.

The retail price of this book might possibly turn off some fans but Elvis The Documentaries will make a nice addition to your book collection, and moreover a handy well researched reference book pertaining to these two great projects into Elvis' career and legacy.

You can see a sneak preview of some of the images contained within the pages of Elvis The Documentaries.

Take note this still possible to order the book directly from JAT Publishing at www.jatpublishing.com.