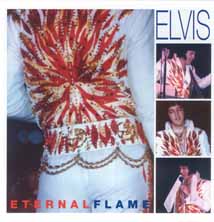 I read a few reviews of this CD from this but somehow my views on this particular outing differ in many ways.Some of the reviews seemed to think the performance itself is very ordinary while the sound quality being excellent. Having attended several shows from this period and actually three in October 1976, I can easily say the perspective on how a particular show was sounding (including Elvis) is rapidly lost when hearing soundboard recordings. By no means the sound in the different arenas reflected what we are hearing from these recordings, and accordingly it's a bit too easy to hit the performance without taking several factors into account. Usually we don't hear much the audience response and consequently have the feeling the show is aseptic. The sound mix can also play tricks and give false impressions on the overall performance.

Given the above let's go back to "Eternal Flame" and my own view about this outing. The show by itself is far from being "boring" and think Elvis actually sings pretty good throughout the whole show, however the audience response can't be heard much and it gives a feeling of "not having life". The sound isn't really bad but lacks what some other releases from 1976 had,  a much fuller sound. Some of these being ; Goodbye Memphis, My It's A Been A Long Long Time and Chicago Beat.  From these October 1976 gigs the latter title is definitely better in terms of sound quality and the other two from the same tour are definitely inferior, at least to my ears. It doesn't mean the sound is bad though and most people will certainly enjoy it a great deal. We certainly heard much worst in the past.

There would be several highlights for me but I particularly enjoyed "If You Love Me Let Me Know", "You Gave Me A Mountain", "And I Love You So", "Help Me","Steamroller Blues" and "Hurt".These choices can vary from one person to another and are obviously pretty subjective as well. The show is complete except for a few seconds missing from "Funny How Time Slips Away".

The Lone Star label won't make history for their artworks in general. This is not as bad as "Dallas SeventyFive" and more related although some shots are from Dayton,OH., however since Elvis used the same suit then it's close enough to me and completely appropriate.

I have no doubts in my mind that the 12,000.  fans or so in South Bend,IN. on October 20th 1976 enjoyed the show that night as they were "creating the excitement of a crowd". The eternal flame is still burning into their hearts.