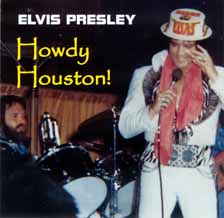 Amen /I got a woman (in part)
Elvis says "Howdy" to his fans
Love me
If you love me (let me know)
Love me tender
All shook up
Teddy bear/ Don't be cruel
Hound dog
The wonder of you
Burning Love
Band Introductions
Johnny B. Goode
Drum solo from Ronnie Tutt
Bass solo from Jerry Scheff
Piano solo from Glen Hardin
School days
T-R-O-U-B-L-E
Trying to get to you
How great thou art
Let me be there
You gave me a mountain
An American trilogy
Little darlin'
Mystery train/tigerman
Funny how time slips away
Can't help falling in love
Closing Vamp Recorded live, Houston, Texas June 5, 1975)

Out now Out now is the long awaited CD "Howdy Houston" from the Lone Star label. This release is from a soundboard recording from Houston, Texas, June 5, 1975. And as we can expect from this tour that he was in a great mood. This show is not an exception, for he's fooling all around through the whole show. This show was released first on a CD-R, but here the sound quality is much better. The artwork is again sober, with a picture from Jackson, MI. June 8th 1975 afternoon show. The show is unfortunately incomplete, and starts with Amen-I got a woman and ends with Funny how times slips away. They added Can't help falling in love as bonus song from a soundboard dated probably from fall 1976.