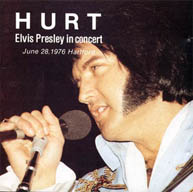 Theme 2001
See see rider
I got a woman/ amen
Love me
If you love me
You gave me a mountain
Medley; All shook up/ Teddy bear/ Don't be cruel
And I love you so
Jailhouse rock
Fever
Love letters
School days
Hurt
Hurt
Hound dog
Funny how time slips away
Can't help falling in love
(Recorded live, Hartford, June 28, 1976, Evening show)

Sunset label released the first ever (as far as I know) soundboard recording back in 1992. Unfortunately the sound quality is not very good, nowadays it falls to the category "good audience / bad soundboard recording". As we listen to this CD it“s evident that the sound is very muffled, as if it was recorded from inside a piece of cloth! It could be possible that there has been much hiss on the tape, and that someone has tried to dump the noise. The result is the muffled sound and that when you watch your graphic equalizer on your stereo, there“s no life on the high side. That“s not the only problem: the cover with a surprisingly appropriate photo claims that the date is June 28, 1976 and the place is Hartford. One look at any reference book / website proves that on that date he was in Phildelphia! In Hartford he was on July 28th. Well, the back cover says: "June 1976, Largo Evening Show" and that was June 27th. The tracklisting of Largo show is different enough to prove it wrong. Confusing enough! Finally it“s made found out that the actual show is from the evening of July 24th 1976 in Charleston. The recording must be incomplete, since the lenghty intros are missing, and supposedly he sang America before them like usually but it“s not here. He is in a neutral mood, not good, not bad, he does his job. Even though it“s only the third show of the tour, he sounds a littel tired, though his voice is very deep and warm. There are solid renditions of If You Love Me, You Gave Me Mountain and And I Love You So. He mumbles and walks through the oldies, the opening songs are okay with B-52 - always a positive thing to me. The title track comes with a complete reprise on which he goes steadily to the highest point - a good version, but it suffers from the sound quality. All in all this is a run-of-the-mill -show with (a) few highlights and not in a very enjoyable quality. But this is a piece of history, and I“m still glad I have it!