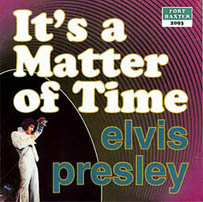 It's a matter of time

2001: A space odyssey
C.C. Rider
I got a woman/ amen
Until it's time for you to go
You don't have to say you love me
Steamroller blues
You gave me a mountain
Fever
Love me
Blue suede shoes
Love me tender
Johnny B. Goode
Hound dog
What now my love
Suspicious minds
Band introductions
I'll remember you
I can't stop loving you
American trilogy
Can't help falling in love
(Recorded live, Las Vegas, February 5, 1973, dinner show)
It's a matter of time
(Live, Las Vegas, August 25, 1973)

What can be said of this concert except one word - Awesome! Elvis sounds great and the concert is Fantastic. This CD was recorded at the Dinner show on the evening of February 5, 1973 at the Las Vegas Hilton. Elvis opened this engagement on Jan 26, and did two shows a night, one Dinner and one Midnight show till the 23 of Feb. What was a rather excellent opening show for Elvis later turned sour at the latter part of this engagement. Later during this engagement, the energy was lost from the shows and Elvis had regained a lot of the weight he had lost in preparation for the Hawaii show. And if you read the bodyguard book "Elvis-What Happened", you'll know what took place in Elvis' hotel suite on February 19 (if this is really an accurate account-who knows). Anyway on to the show.

First let's talk about the sound on this CD. The mix is perfect - it sounds just as good as something RCA could release. Faint hissing is apparent on some of the softer passages, but it does not detract from the enjoyment of this CD. Elvis had just completed his "Aloha from Hawaii" Special 3 weeks earlier, and was still in top form. This was a period in Elvis' life where he seemed more gentle and softer in his approach and style, as one can see in his Hawaii Special. This is especially true in this concert. This can possibly be the softest Elvis concert I have ever heard! The sound in this concert is soft too, but still powerful. Now on to the concert.

Instead of describing each song, I will just touch upon some songs. A lot of the songs that were done at the Hawaii concert were still in Elvis' repertoire for the evening. Elvis begins with the usual See See Rider. He then starts into the I Got a Woman/Amen number. At the end of Amen, after JD does his thing, Elvis comments "That wasn't all that good really, you know", obviously poking fun at JD, and getting a laugh from all in attendance.

An absolutely beautiful version of Until It's Time for You to Go is next. Too bad Elvis laughs near the beginning of the song, and spends more time kissing the women in the audience then singing the song properly, but it is still a very good performance. Once Elvis starts You Don't Have to Say you Love me, the sound on the CD gets louder. Next is You Gave me a Mountain, and it is beautiful like always. Since the inclusion of this song on the Jan. 26 1972 show (see Opening Night '72), it had become a regular fixture of an Elvis concert. This song was performed with a lot of emotion, especially during this time period where Elvis was particularly saddened by his divorce from Priscilla. This version is equal to if not better than the Hawaii version. Elvis then goes into his "Medley of some of my records for you". Just before Elvis begins Hound Dog, he introduces it as a song he did on the Ed Sullivan Show. "They filmed me from the waist up And Ed looked at me and said hmmm son of a bitch!"

Elvis then goes into What Now my Love. It almost seems as if just him and Priscilla are in the room, and he is singing it directly to her. You can feel this emotion just from the speakers of your Stereo system, and this was recorded 25 years ago!! After Suspicious Minds and the Band Introductions, Elvis does another treat, I'll Remember You. To me this song is one of the most beautiful that Elvis performed live, especially during this time period in his life. He introduces it as a song he did recently for a charity show in Hawaii. At that time the Hawaii Special had not yet aired in the US. This song is softer than the Hawaii version. American Trilogy is next and is always breathtaking. This is a very concentrated version of this wonderful song. As a bonus the people of Fort Baxter have included It's a Matter of Time, from an Aug 25/73 show. The sound quality is an audience recording. It is a good performance, and Elvis has to sing the first line to give the band the right key. It thus gives the title to this CD.

As I have said before, this is a very soft and gentle Elvis concert, with very clear sound quality. This CD should not miss an Elvis collection. It must be said that this was still early in 1973, and even though Elvis started to have health problems at this stage (he cancelled the Jan.31-Feb.1 + Feb.13-14 shows), this was before drugs and chronic health problems would take their toll on him as in the following years to come. This was when Elvis was still in top form, and he got down to business and joked with the crowd like he always did. If you like the Hawaii show, you'll love this CD. This concert showcases Elvis at a time in his career where it seemed anything could be possible.

After literally performing for the world via satellite from the lush surroundings of Hawaii, Elvis returned to the mainland for yet another season in Vegas. Elvis opened at the Hilton on January 26 and played through until closing night February 23, 1973. This disc was recorded at the February 5 dinner show, except for the closing title track, which was recorded at the August 25, 1973 dinner show.

We'll dispense with the few negatives right away.... In this very, very short concert (clocking in at about 50 minutes), Elvis seems to be just going through the motions... The set is very similar to the Aloha show, but with a little less intensity..With Fort Baxter using Its A Matter Of Time as the title, one would assume that the tune would be the highlight of the disc...... it's not. The sound on the tune is distant and has quite a bit of echo...Basically, not very interesting.

This disc as a whole is worthwhile though... The usual 2001 and C.C. Rider get things going, followed by a very laid back I Got A Woman/ Amen...This version is rather cool with the intensity building as it moves along.. Until Its Time For You To Go falls short here... A better version can be found on the Opening Night 1972 CD. But Elvis follows with a very nice version of You Don't Have To Say You Love Me...

As mentioned before, the intensity level on this evening is not full bore, as we can see with Steamroller Blues with some of the steam missing.. Although the following You Gave Me A Mountain is powerful and comes across very well..

Fever is rather bland without the visuals..As is the same with Love Me, Blue Suede Shoes, and the very boring Love Me Tender... James Burton pickes things up, as usual, with a rocking version of Johnny B. Goode.. This version is hot... What can you say of Hound Dog ?? It's just Hound Dog..take it or leave it.

A highlight of this disc is the majestic sounds of What Now My Love... This song is right on the mark..powerful, poignant, and graceful... Its good to see that Elvis kept this song in the set for awhile after Aloha.. Suspicious Minds grooves as always, with some funny dialogue between Elvis and some fans..

After a very understated reference to "a charity show" that he just did, Elvis pulls I'll Remember You from his soul, to deliver a beautiful and heartwarming performance. Followed by another powerhouse version of I Can't Stop Loving You.. The patriotic An American Trilogy is the final highlight of this disc. And the passion we have come to expect from this tune, is right on, leaving nothing behind.. Can't Help Falling In Love closes this very short concert as Elvis scurries from the stage with the usual fanfare !!!

Although this review has pointed out some negatives of this disc, its fair to say that the positives are just as strong, if not a bit stronger.. The sound is excellent, only tapering off on the title track, the show moves, there are no extended and boring dialogues in between songs, there are some very powerful moments, and the bottom line, its Elvis. Enough said !!