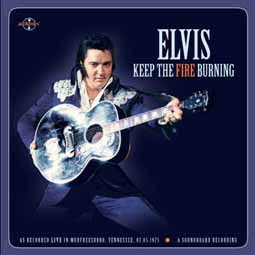 01. Also Sprach Zarathustra (2001 Theme) - 02. C. C. Rider - 03. I Got A Woman / Amen (medley) - 04. Love Me - 05. If You Love Me (Let Me Know) - 06. Love Me Tender - 07. All Shook Up - 08. (Let Me Be Your) Teddy Bear/Don't Be Cruel (medley) - 09. The Wonder Of You - 10. Burning Love - 11. Band Introductions - 12. Johnny B. Goode - 13. Drums Solo (Ronnie Tutt) - 14. Bass Solo (Blues - Jerry Scheff) - 15. Piano Solo (Glen D. Hardin) - 16. School Day (Hail Hail Rock'n'Roll) - 17. Bridge Over Troubled Water - 18. T.R.O.U.B.L.E. - 19. I'll Remember You - 20. Let Me Be There - 21. An American Trilogy - 22. Funny How Time Sips Away - 23. Hound Dog - 24. Elvis thanks - 25. Little Darlin' - 26. Can't Help Falling In Love - 27. Closing Vamp. Soundboard fans are in for a treat as we get a complete soundboard recording from Elvis’ April – May tour of ‘75. Presented here is Elvis’ closing show from the tour in Murfreesboro, 7th May 1975 evening show, a clip from this show has already been released on the CD “Dixieland Rocks” from the “FTD Label”. With this being Elvis’ closing show, he puts a bit more into the show, Elvis was in a good mood and fine singing voice throughout, Elvis was out to please his fans that night and have a little fun at the same time although he just stayed on stage the hour, he obviously wanted home to. After his trade mark start to the show of “I Got A Woman/Amen” Elvis introduces himself as “Kate Smith” a name usually reserved for Charlie Hodge, later Elvis sings “Love Me Tender” with the introduction of “I Love Little Baby Ducks” and from the notes in the sleeve we learn that this is in fact the first line to a country song by an artist called Tom T. Hall? The middle part of the show has become more than familiar to fans over the years, as we have an abundance of soundboard releases from around this time, and all are based on the same songs for the most part anyway “All Shook Up, Teddy Bear/Don’t Be Cruel, The Wonder Of You, Burning Love, Band Introductions and Solo’s. One of the highlights of the show is “Bridge Over Troubled Water”, after his new record of the time “T.R.O.U.B.L.E” Elvis introduces “I’ll Remember You” from the Aloha Special, and as the band play the intro, to the song Elvis gets distracted by a fan in the audience and breaks into the song “Alfie” with the one liner “What’s it All About”, before saying “You’ve Already Got One” to which we can but surmise she had already received a scarf from Elvis earlier in the show, but she must have been pretty enough to attract his attention again. Before closing the show Elvis thanks everyone for coming to three separate shows, in Murfreesboro, and that this was the last night of the tour, and that they hadn’t rehearsed or said hello to each other except on stage, and that he would see the band again in three weeks. Elvis finished the show with his fun song “Little Darling” & “Can’t Help Falling In Love” then Elvis was off home to Memphis, happy to have completed his first tour of 1975. As with the previous release we get a eight page booklet with information on what Elvis had gotten up to in the previous six month’s prior to the tour, and detailed list of the April – May tour. On the whole a good show with something for everyone.