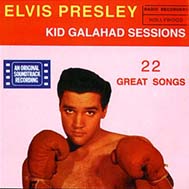 It is October, 1961, and you have been invited by Elvis Presley, now one of the biggest box-office draws, to the recording sessions for his latest project, entitled "Kid Galahad." Even though the movie is a remake of one from 1937, this movie will differ in that there are six songs slated for inclusion in the picture. On October 26,,1961, Elvis and his usual band, augmented by Tiny Timbrell, show up at Radio Recorders for the sessions, which will be engineered by the outstanding Thorne Nogar, a veteran of Elvis sessions since 1956. Magic is in the air once again, and this magic - or at least some of it - is bottled in this release, "Kid Galahad Sessions." This release features most of the sessions from October 26th (as well as the remake of "King of the Whole Wide World" from the 27th), which would yield the "Kid Galahad" EP, a release that would peak at #30 on the singles chart in September of 1962. Unfortunately, the release uses the mono tapes, not the 3-track stereo ones, and it has been mastered a tad too fast (sometimes very fast), an occurrence which one must get use to while listening to this CD. The sound quality is not completely perfect, but it is quite good at its best points and fair at its worst. At some points its seems like certain takes were taken from the vinyl record "Radio Recorders Revisited," because some pops and clicks can be heard. Despite this, the CD is still enjoyable - particularly if one is a fan of the "Kid Galahad" EP - and gives us the chance to hear Elvis at work on one of his best songs ever, "King of the Whole Wide World." Now, like a fly on the wall, let's go through the material take by take.

The CD opens up with voice of Throne Nogar announcing "King of the Whole Wide World" as M1, take 16. For some reason, takes 1-15 are not on this release, or any others; maybe, they were erased or they were unavailable. Before the take, Elvis worries about the song's introduction, which was played by the bass only on the demo. Bob Moore confers with Elvis about the intro, and in response to Moore's playing, Elvis says, "That's it! That's all there is in the demo." The take immediately stops within the first ten seconds. Take 17 showcases the different arrangement originally intended for the song. In this arrangement, the bass is more prominent, the sax is less so, and there are no fills from Scotty Moore. Take 17 falls apart midway, and Elvis, the guilty culprit, acknowledges his fault by saying, "I forgot the tune." In take 18, the vocals are more dominant, and this take falls apart in the chorus, when DJ misses a drum lick and E's voice cracks. In frustration, Elvis yells, "Aggggghhhhrrrr!!!" In take 19, Elvis loses track of the words this time, but the song does make it through to Boots Randoulph's mild sax solo. In response to Thorne's asking if he wants to hear it back, Elvis says yes.

Take 20 shows the song's further evolution, even though it does not make it past the first line. It is looser, with Scotty adding fills after each line in the verses and Tiny Timbrell playing a shuffle rhythm on his guitar. Take 21 breaks down as Elvis laughs and says hold it. In take 22, Elvis loses track of the lyrics in the first chorus, and he shouts "hell" in frustration afterward. Take 23 breaks down as Elvis loses track of his vocal in the 2nd verse and stops the song during the solo. With very few takes having been completed so far, Elvis in disgust asks, "Any better, Freddy? Any suggestions," directing his comments to Freddy Bienstock, the music publisher for Elvis' two publishing houses at the time. Thorne also make some suggestions about the break. After Elvis' voice cracks during take 24, Elvis says to the band, "let's do one more." Finally, after so many incomplete takes, Elvis and the band make a complete one with take 25. In this version, the vocals are too far up front and Boots' solo is too far restrained.

In take 26, Elvis literally screams out his vocal parts, and this prompts Thorne to say, "Don't try and kill yourself on those things, El. Actually, you know, its sounds better when you don't hit those things so hard." In take 27, the rhythm section falls apart, and in the following take, El's voice breaks in the chorus. Take 29 is just the second complete take on the CD, and it can be found in better quality on "The Hollywood Sessions." The tempo is a little slower than the released version, but is a good performance by all, especially after what has gone before. Take 30 quickly breaks down due to the presence of a large thump and all laugh in enjoyment. Take 31 was originally picked as the master, but was quickly discarded after Elvis and the band recorded a remake the following day. This unreleased master take has the usual fills from Scotty, but the track's tempo is a little slower than the released master. Elvis' vocal is more subdued in this gospel infused number, and Boots' ending solo seems as if it is still being decided upon. Although it is not quite perfect, it is still one of the rarest versions in the Presley catalog, and for some reason it has been passed over BMG in the last couple of years. I certainly think that it should have been part of last year's Platinum box set; it could have replaced "Can't Help Falling in Love" or "Return to Sender." After all, how many versions of these songs can we have?

Next up on the CD are the four takes done of "King of the Whole Wide World" on the following day, including the master take of the remade version. Takes 1-3 can be found in better quality on "The Last Temptation of Elvis." On this CD, the takes are presented at too fast of a speed, and at times, Elvis sounds like he is Mickey Mouse. Take 1 introduces the sax intro that would be the sound of the released take 4, but it falls apart very early on when someone drops something. After hearing Elvis ask impatiently, "what happened," the band begins playing the rhythm, and to them, the King says, "You guys don't get paid overtime at night, so it don't make a damn difference!" Unfortunately, Thorne pushed the pause button, so we are left wondering what Elvis was going to end his comment with. Take 2 also immediately breaks down because, "Somebody hit something off." Take 3, which can also be found in excellent quality on "The Hollywood Sessions," is way too fast on this presentation due to the mastering, but the correct tempo and solos are their. It is very close to the master take 4, which is also presented.

Jumping back to October 26, the next batch of takes up on the disc are the seven takes of "A Whistling Tune," a song recorded, but rejected for "Follow That Dream." Unlike that version, the one released on the "Kid Galahad" EP was slower in tempo. Take 1's opening was used for the final master, and like many others on this disc, it can found in better quality on "The Hollywood Sessions." The song is pretty, but unmemorable. There is some distortion on E's vocal on this release, and this results in numerous pops in one's speakers. Take 2 starts suddenly, without an opening, but Elvis quickly loses concentration. Elvis says, "That's what I mean. I can't figure [the tune] out." Take 2b, which proceeds without a take announcement, is solid, but Elvis' vocal is somewhat distorted. Take 3 is a false start, and in take 4, the piano takes the opening, but the take is quickly aborted. In the following take, Elvis comes into too early, and in take 6, Elvis misses the band's cue completely. Take 7 has seen the whistling intro shortened to two bars, but it falls apart in the second verse. The other part of the master, take 8, is included, but it is only for few seconds, because it fades out after 30 seconds.

The last part of the disc gathers together the 21 takes needed by Elvis and the band to complete the pretty ballad entitled "Home is Where the Heart Is." This has always been a personal favorite of mine, not because it is great song, but because Elvis' performance is quite good. It is head and shoulders above the average Elvis movie ballad. Many of the 21 takes are incomplete, but those that are complete are all quite good. Takes 1 and 2 are immediate break downs because DJ can't seem to get the correct downbeat. After the delay, Elvis urges the band on by saying, "let's go!" Take 3 showcases the slower tempo originally planned for the song, but Elvis unfortunately doesn't know where to come in. Take 4 features a lovely intro by Scotty, but there is quite a bit of distortion in Elvis' vocal, and it falls apart as Elvis loses track of the lyrics. In take 5, Scotty misses the intro completely, and in the following take, Elvis is still feeling out his vocal delivery. He says, "Hold it man! I forgot the damn tune to the son of a bitch." Take 7 is the first complete take, and it is a very sweet performance, although the distortion of his vocal is distracting.

In the following take, Scotty plays the intro in a higher key, but it is aborted because, as Thorne notes, "the piano's chords and [Scotty's] chords are not going together." The piano needs to give more backing, and this is what Dudley Brooks does on the next take, which breaks down when Elvis hesitates coming in. He yawns as Dudley plays him the melody of the song on piano. Take 10 is complete, but the vocal is still distorted at points; a cleaner version is contained on the "Hollywood Sessions." Take 11 is an instrumental break down, but Elvis notes, "It seemed like I'm waiting for the lyrics." Take 12 is complete, and from this point on, the sound on the disc is much clearer. Elvis' vocal mannerisms are there, but the feel is not. Take 13 is preceded by a few seconds of heavy feedback, and the tempo is starting to creep up. Take 14 is complete but is not spectacular, as Elvis' vocal is still falling into place.

Before take 15, Thorne notes that this is the uptempo version, but the song breaks down, as Elvis and the band fall into a fit of laughter. The following take breaks down on the first line, and Elvis, in frustration, yells,"Oh hell!" In the following take, there is a frog in E's throat, and he begs the band to give him one more chance. Takes 18 and 19 are an instrumental false start and a break down, respectively. Take 20 is complete and very pretty, but it lacks the magic of the master, take 21.