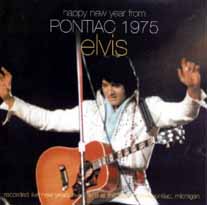 2001 Theme
CC Rider
I Got A Woman/Amen
Elvis mentions he has split his pants
Love Me
Trying To Get To You
And I Love You So
All Shook Up
Teddy Bear/Don't Be Cruel
Heartbreak Hotel
One Night
You Gave Me A Mountain
Polk Salad Annie
Sweet, Sweet Spirit (J. D & The Stamps)
Introductions / Whatĺd I Say / Solos/ Hail, Hail RockĺnĺRoll
My Way
Love Me Tender
Elvis wishes everyone a happy new year
Auld Lang Syne
How Great Thou Art & reprise
It's Now Or Never
America
Elvis introduces Lisa & Verno
Hound Dog
Wooden Heart(Part)
Can't Help Falling In Love

Elvis departed from Graceland on Tuesday 30th December, Elvis as ever had more than his fair share of female company, on this trip Linda Thomson & Sheila Ryan accompanying him, as was his father & daughter Lisa Marie. The band started to arrive on the Monday to set up for the show. Elvisĺ life was once again being threatened so security was stepped up, and after the show a man was reported to have been arrested for carrying a handgun.

The tickets for this show were imprinted with a picture of Elvis on stage in the middle of the Silverdome, as usual Elvis broke the ticket sales and fan attendance for a single performer, although the building was not sold out, an estimated 62,500 fans attended this show. This was still nearly 30,000 short of a sell out as the Silverdome could seat 90,000. The upper third level wasnĺt used as they felt fans would not be able to see the stage at least thatĺs what reporters were told. The show due to start at 8:30pm was a little late it was around 8:45pm before Jackie Kahane started he was dressed in a bright red suit. Jackie tells a few jokes about the local football team, he also reads out a couple of letters from fans. This is followed by The first of two quartets to begin their piece, the first a Bluegrass & the other a pop rock group. Both groups were supposed to be signed to the RCA label, which would explain why they were there in the first place, but this was not the normal set-up for an opening to one of Elvisĺ shows, as Elvis normally kept it all in house.

As you hear on the CD the fan taping the show states the first group as being weird and a few minutes later saying that they shouldnĺt be here. Some fans later stated these groups were useless & offensive, in-between the groups Jackie Kahane give his predictions to 1976, unfortunately the groups go down a little better than he does although some of his predictions are fairly funny.

The down side to these groups is the sound captured on tape it doesnĺt help, as there is a lot of echo & distortion etc. Which makes it a little more unbearable than if you were there, unless you were stuck at the back then it could have sounded just like it does here on CD. After these groups depresses the crowd, there was a thirty minute intermission before J.D & the stamps came on followed by the Sweet Inspirations, a group called Freedom joined J.D & the Inspirations to help out for the night to give a little more power to the voices. But unfortunately they have not been included here as Jackie Kahane states just before the 2001 theme on the CD "during the second half of the show youĺll get gospel, sole and Elvis" Either it wasnĺt recorded or just left off we skip to track two the 2001 theme, this started at 11:00pm on the dot. The house lights went down, Elvis entered the stadium through a specially prepared 70-meter tunnel in a chauffeur driven golf car.

The stage was set up on the 50 yard line in the middle of the dome, the stage was two tear, the first was around 10 feet high, and the section where Elvis stood was another 20 feet, which made the interaction with the band a little difficult. During the early part of the show Elvis split the seat to his Jumpsuit, and then jokes about it, he continued for around 20 minutes before he asked J.D & The Stamps to sing "Sweet, Sweet Spirit" so he can go change. It must be said at this point the sound is vastly improved to that of the opening acts. As every thing Elvis said can clearly be heard. Which is more than can be said for the old LP "Changing Pants" that was released many years ago.

Here is the track listing and a little of what Elvis has to say through the show: 2001 Theme; C, C Rider; I Got A Woman/Amen; Elvis mentions he has split his pants, also this is the largest audience heĺs ever played to; Love Me; Trying To Get To You; And I Love You So; All Shook Up; Teddy Bear/Don't Be Cruel; Heartbreak Hotel; One Night; You Gave Me A Mountain; Polk Salad Annie; Elvis mentions this is the best new year heĺs ever had, he also leaves to change his suit; Sweet, Sweet Spirit (J. D & The Stamps) Introductions/Whatĺd I Say/ Solos/ Hail, Hail RockĺnĺRoll; My Way; Love Me Tender; Elvis wishes everyone a happy new year and asks everyone to sing along at midnight; Auld Lang Syne; How Great Thou Art + reprise; It's Now Or Never; America; Elvis thanks everyone for coming to the show, again mentioning this is the largest live audience heĺs ever played to, he also thanks the band and Charlie Hodge gets a special mention as he was forgotten about during the introductions, Elvis introduces Lisa & Vernon, Elvis then asks what the audience wants to hear; Hound Dog; Wooden Heart(Part); Can't Help Falling In Love.

The show its self runs for 83 minutes, this is not including the opening acts which run for an additional 53 minutes, a lot has been said about this show. That Elvis didnĺt like it because of the poor sound, the cold, and it couldnĺt have been too much fun for the fans sitting in the cold for around four and half-hours. But that doesnĺt stop Elvis putting on a great show. Which comes across strongly on this CD set, just a crying shame this is not being released hear on Soundboard, but then you may have lost a bit of the audience interaction, as this is most prominent throughout this set. Cold it may have been but I for one would have sat through the show and enjoyed it.