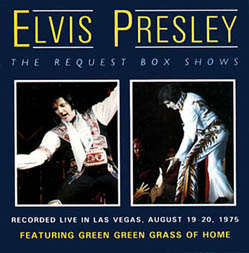 See see rider
Bathroom story (dialogue)
Blue suede shoes
Young and beautiful
Are you lonesome tonight
If you love me
Softly as I leave you
It's now or never
Polk salad annie
Introductions the Righteous brothers
My boy
(above songs are recorded live, August 19. 1975, Las Vegas)
And I love you so
Green green grass of home
Fairytale
T-R-O-U-B-L-E
Why me Lord
Until it's time for you to go
Burning love
Can't help falling in love (Recorded live, August 20, 1975, Las Vegas)

First of all, I must say that I am not a fan of audience recordings, but this CD marks an exception. The quality is very good - Elvis, the band, and the audience can be clearly heard, and this CD presents us with a very interesting engagement. Elvis performed only 3 nights (Aug 18-20, 1975) at the Las Vegas Hilton due to illness, and was flown on the morning of August 21 to the Baptist Memorial Hospital in Memphis for the treatment of exhaustion. His performance however is not hindered by his ill health and by listening to this CD, Elvis does not sound tired at all and in fact gives some remarkable performances. Every song is rather excellent and there are no lacklustres on this disc, taken from shows of the 19th and 20th.

This CD was the 6th release from label Bilko back in 1990, and was their first and only audience recording. Known for their great treatment of Elvis' studio material, Bilko does not disappoint with one of their few "live" material discs. The title for this CD even has an interesting story behind it based on what Elvis explains to the audience. Elvis took one of the ice buckets from the Hilton and someone passed it down the line of people waiting to get in before the show started. The fans wrote down requests for songs that they wanted Elvis to perform and placed it in the bucket. When Elvis was on stage, from time to time he would go to the "Request Box" as he called it, and take out a request that someone had made and perform it. What an idea! This is why there are some rare songs performed by Elvis here because the fans dictated the songs that Elvis would do, unrehearsed. How many performers today base an entire show on this premise? Too bad this did not happen more often, and it would be the first and last time this would be done by Elvis.

Some terrific versions of songs can be found all over this CD. The rarely performed "Young and Beautiful" is one of the first songs on the list and although Elvis cannot remember most of the words, it is clearly followed by a woman's reaction to Elvis: "You're Beautiful!" in which Elvis laughs and thanks her as the audience applauds.

A decent "Are You Lonesome Tonight" in which Elvis remembers all the words to is next. He also kind of plays with this one. "Polk Salad Annie" is a funky, rocking version, and it shows that Elvis never did get bored with this song. The result differs a bit from his famous Feb. 1970 performances of the song, but its momentum never subsides and Elvis invests as much into it as the a fore date mentioned. Afterwards, Elvis introduces the Righteous Brothers from the August 19 show who were in the audience. "These fellows have been tremendous entertainers for a long time … and they've had some of the best records since Fats Domino". A request for "My Boy" is one of the finest moments on this CD, and is a high cut above the studio version. Elvis' deep and impressive heartfelt vocals do this song justice!

"And I love you so" taken from the next night's show is beautiful, but not as good as Elvis would do in December of the same year. Another rarity performed, "Green Green Grass of Home" seems more convincing than Tom Jones' version, and is deeply rich in tenderness and emotion, more so than the soundboard version found on "A Profile Vol. 2" from the midnight show of March 22, 1975. This is probably the highlight of the show! A request is also given for Elvis' latest record, "T-R-O-U-B-L-E" and it rocks! More so than the studio version, and is ever so powerful. As usual, Elvis closes with "Can't Help Falling in Love" and we have the version here from August 20 which ended this rather short but sweet engagement.

Although the Elvis of 1975 had experienced his ups and downs, this CD shows us the incredibly powerful and rich voice that Elvis had developed at this stage, given his ill health. Elvis would return three and a half months later to play the Vegas stage again on Dec. 2, 1975 to make up for the shows that he missed during this engagement. This began Elvis' very exciting Pre-Holiday Jubilee engagement. And again, we would get some very special and great performances from Elvis. If you are a fan of audience recordings, then this comes with the highest recommendations. If you are not, then this is still a great sounding disc, and a good documentation of Elvis' ill-fated Summer Festival, worthy of any collection!