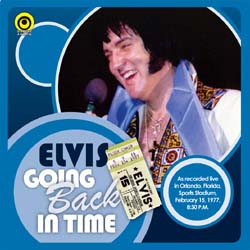 GOING BACK IN TIME

This is the third release from Straight Arrow and features another audience recorded concert from the February 1977 tour. This show was recorded on the 15th in Orlando, four days earlier than the previous release by this label. Once again they have produced a lavish 16 page booklet containing over 20 full colour photos from the period, together with extensive liner notes setting this tour in context, as well as a detailed commentary on the show itself. On closer reading, it turns out that the majority of the photos featured are from the 18th February, as they inform us that photos from the actual show are scarce and do not show Elvis at his best.

The text further states that this is a previously unreleased recording which has been processed with 24 bit technology from the original mastertape. However, although the sound quality is good, it is not quite as clear as on the Tennessee Starlight show, owing to slight distortion resulting from saturation during peak levels. Happily this is not intrusive and only noticeable if played at high volume. In addition, some of the dialogue can be hard to make out due to an extremely vocal audience, but on the plus side, the atmosphere is genuinely exciting and may be a revelation to anyone doubting the intensity of his popularity during 1977.

Right from the start there is a great vibe, with shrieks of excitement as the band begin the 2001 theme. These become deafening during the opening vamp prior to Elvis’ arrival on stage, almost drowning out the band with their intensity. His voice proves powerful and strong for See See Rider and the audience’s enthusiasm is unabated with shrieks all through this opening number. The electric atmosphere continues during the Well Well routine, preceding I Got A Woman, which ends in a five verse Amen chorus, with Elvis driving the band on through three key changes. Unfortunately, the tape captures a crowd dispute regarding some fans blocking the exit routes during J.D.’s vocal slide, but luckily this is resolved before Elvis resumes singing.

He then welcomes the audience with his usual comments and during Love Me some very excitable fans receive scarves, to intermittent bouts of applause. This is followed by a good version of If You Love Me, with the crowd clapping along enthusiastically. After this, Elvis announces that they are using a different sound system and explains that what the audience hear is different to what is heard by the musicians on stage.

A powerful You Gave Me A Mountain is performed next, followed by It’s Now Or Never which he halts at the end of the second verse, saying “Whoa, whoa, wait a minute…I lost the rhythm…once I go over there I can’t hear you,” alluding to problems with the new sound set-up. He then resumes the song from the second verse, jokingly calling out “Instant replay.” The 50’s hits follow this, which include the last ever version of All Shook Up, which was replaced by Little Sister for the rest of this tour.

During Teddy Bear, Elvis ad-libs “Feedbacks ain’t the kind I love enough,” highlighting a particularly annoying incident and Don’t Be Cruel includes the ad-lib, “Please let’s forget the past, before I kick your--—“ This medley is performed as the usual scarf giving sequence, followed by a good version of Help Me and a rare outing for Big Boss Man, which was only sung once on this tour.

My Way was always a highlight throughout 1977 and the version featured here is excellent. Unfortunately it suffers from feedback early on, resulting in a false start, but the ensuing performance is faultless and the crowd reaction is so overwhelming that Elvis reprises the last two verses and on this attempt manages to reach an even higher ending note.

In the band introductions which follow, Larry Strickland is credited as ‘the guy who doubles for me on all the low notes,’ before Elvis corrects himself, saying “Doubles for me?....he SINGS all the low notes.” Later, Kathy Westmoreland is accused of having, “More rings on than I do,” before he jokingly goes on to denounce them as fakes.

Typically, the songs featuring the individual band members amount to little more than throwaways, lasting for just over a verse each and the tempo on Love Letters appears to drag slightly, as was common on this number. However to be fair, this was always a difficult song to perform live, as it requires an intimate atmosphere more suited to a studio recording than a live concert.

Hurt is performed next and Elvis can be heard remarking “God help me,” in the build up to the demanding opening. It’s another great version and afterwards he says, “We’ll just do the last part of that song over again and I’m going to bust that note wide open….with the help of God and a few of my friends, I’ll make it.” This results in a powerful reprise with yet another great reach on the operatic ending.

A lightweight (but crowd pleasing) Hound Dog follows this and the concert concludes with Can’t Help Falling In Love, where he affects a mock Inspector Clouseau accent on the line, “Some things you kno, you kno, are meant to be” The tape also includes the ‘Elvis has left the building’ and souvenir announcements.

After this, three songs (It’s Now Or Never, My Way and Hurt) are featured in binaural stereo from this show. They have been recorded from the mixing desk, to highlight the piano accompaniment, with almost nothing except Elvis’ vocal audible in the background. This mix was presumably made as an aid for Tony Brown’s replacement in the line up, which give a different perspective to the featured performances and provide a nice bonus to end this CD.

In conclusion, Straight Arrow has once again achieved an excellent result, allowing us to enjoy another exciting and atmospheric concert from his final year. Elvis is in good voice throughout and there are no songs performed by his backing vocalists to cover for his lack of stamina, as on their previous release from this tour. Consequently this is a better show which is given added appeal by an extremely vocal and enthusiastic audience. This, together with its attractive presentation, ensures that this will be a nice addition to any collection.