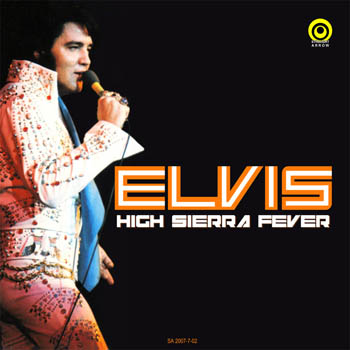 This release from Straight Arrow contains an audience recording of the midnight performance from the Sahara Tahoe Showroom in Lake Tahoe on the 7th May 1973. Two other shows have been released on CD from this season: Stateline California / Return To Lake Tahoe (10th Dinner Show) and the FTD soundboard Takin’ Tahoe Tonight (13th May 3am show--also available as an audience recording titled The Man In White Vol 4). This engagement ended prematurely, with all shows from the 17th onwards cancelled due to Elvis’ poor health.

The 16 page booklet includes an interesting commentary on his Tahoe engagements, stating the advantages of this venue as a less pressurised environment, with reduced media scrutiny and a smaller more intimate stage setting. As photos from this period are scarce, only four of the eighteen colour photos featured in the booklet and artwork are from this engagement, with the others taken around the same period where the same jumpsuits were used. The liner notes conclude with a brief review of the featured show, along with some surprisingly negative comments taken from a newspaper report at the time.

This recording is taken from a first generation copy of the original mono cassette and is above average for an audience recorded source. As a guide, the sound is quite similar to that on ‘Red Hot In Vegas’ from the same label, but the sound here seems better balanced and not as overloaded. As with any good quality audience recording, it provides an enjoyable insight into the atmosphere of the occasion.

The CD begins with the 2001 introduction, leading into a fast paced See See Rider, with the drums nicely prominent and the bass clear and well defined. During the ‘Well Well’ routine prior to I Got A Woman, Elvis jokingly starts the Lord’s Prayer, calling out “Our Father….” which prompts laughter. The Amen chorus features two vocal slides from J.D and afterwards he greets the audience, feigning confusion by saying, “Welcome to the International….I’m not at the International….where am I, Hawaii? Oh no Lake Tahoe, yeah.”

Love Me Tender has the often used teasing false start and contains the ad-lib,  “….’til we both go blind.” It is accompanied by regular bouts of hysterical shrieks before he directs the band to end it with a simple “That’s all.” Steamroller Blues is next and proves to be a fine version though the piano is low in the mix. A single piano chord serves as the introduction to You Don’t Have To Say You Love Me, which follows without a break.

The pace continues with a superb version of You Gave Me A Mountain and afterwards he introduces a medley of his ‘50’s hits starting with Love Me. During this song a female fan close to the recorder can be heard encouraging another to make her way to the stage saying, “Go up there….I dare you!” Blue Suede Shoes is quickly followed by Heartbreak Hotel leading on to Long Tall Sally / Whole Lotta Shakin’. It is worth noting that although these songs are played back to back in quick succession, they appear committed and are by no means throwaway performances.

Afterwards Elvis says “I’m Leavin’” as the cue for the next song. This prompts someone to shout ‘Come back here!’ resulting in widespread laughter. Another good performance ensues and after this, without preamble he launches straight into a two speed version of Hound Dog, with a pause for effect before the final --‘You ain’t no friend of mine!’

Fever contains the usual barrage of jokes and ad-libs as scarves are distributed amongst the faithful, before an excellent What Now My Love with a superb ending. Suspicious Minds follows this, which benefits from good crisp drumming and contains various ad-libs including, “Straighten Up Now” and the well rehearsed “Hope this suit don’t tear up baby.”

The band introductions are next, being short, to the point and not protracted as they would be in later years. Emory Gordy had replaced Jerry Scheff on bass by this point and both Charlie Hodge and Joe Guercio’s introductions are greeted with horrified shrieks which seem to suggest that they were victims of Elvis’ water throwing antics.

After this, he mentions his recent satellite show adding, “There’s a song I’d like to sing for you.” This provides the cue for a great performance of I’ll Remember You, which is immediately followed by I Can’t Stop Loving You. At the end of this song, he calls out the word ‘Day’ twice, possibly in an attempt to reprise the ending. However the prompt is not taken up by the band, so instead he asks the audience, “What do you want to hear…Trilogy?”

American Trilogy follows and proves to be another excellent performance with a strong ending. A Big Hunk Of Love is sung next and afterwards he calls out, “Let’s do Bridge.” Luckily for us, some female fans who can be heard talking during the opening lines are silenced with an emphatic ‘Shh!’ from someone close-by which allows us to enjoy this great performance without further interruption. This is followed by a simple “Thank you,” before he calls out “Blue Hawaii” as the cue for his closing number-- Can’t Help Falling In Love.

The final track is taken from the midnight show the day before and features a performance of It’s Over. It starts with Elvis vocalising the melody of Surrender which Glen Hardin picks up on the piano, but quickly breaks down with Elvis remarking, “I got the wrong song…It’s Over…let’s go home.” Apparently this was the only variation in the play-list that evening to distinguish it from the featured show. Needless to say it’s a nice bonus and provides a fitting end to this CD.

To sum up: This is an enjoyable fast-paced show containing some great performances. It seems superfluous to add that the attractive presentation and superior sound make it a worthwhile purchase for any serious collector. Straight Arrow has built a reputation for giving us interesting and good quality releases; this one is no exception.