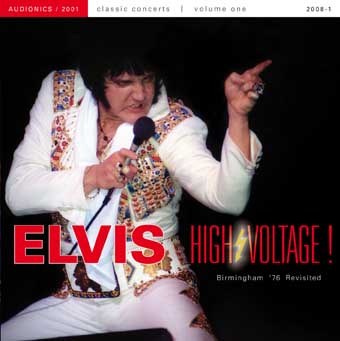 This is the first release by the Audionics / 2001 partnership in a planned series of classic re-releases offering improved sound and upgraded artwork. This particular show was performed in Birmingham Alabama on the 29th December 1976 and was previously issued under the title: ‘Burning In Birmingham. However this time it’s more complete, as it now includes the full 2001 introduction, a slightly longer It’s Now Or Never (11 secs) and an extended closing vamp (9 secs). In addition, the sound has been re-mixed from the original binaural tape to produce a stereo recording.

It’s issued with a sixteen page booklet bearing an extremely unattractive photo of Elvis grimacing menacingly on the cover. How anyone could possibly think this appropriate I cannot imagine; it’s unflattering in the extreme. This aside, there are 26 colour photos within the booklet, along with interesting liner notes and several contemporary reviews. Further photos are featured on the inlay tray and back cover, together with an unusual shot of Elvis lying down on the disc itself. Aside from the awful cover, it’s another nice production.

Whilst the sound quality of this release is better, it is not the significant improvement many had hoped for. Compared to the original title, it has a slightly fuller sound with a corresponding increase in bass, but the overall result has disappointed many, because the sound remains relatively flat. The reasons for this are explained in the booklet, which states that the original recording was binaural, with only the isolated keyboards of Tony Brown and David Briggs on the right channel. Moreover, the tape was damaged in parts and required repairs, before a painstaking re-mix could be undertaken to produce a stereo recording. So all in all, this was no easy job and the best they felt could be achieved under the circumstances.

The CD begins with the previously unreleased 2001 introduction, featuring David Briggs’ clavinet high in the mix, giving it a funky ‘70’s vibe. Elvis bursts on the stage singing “Yeah See, See See Rider,” sounding slightly breathless but enthusiastic in the extreme. I Got A Woman follows this, with an extended four verse Amen chorus and  two vocal slides from J. D, before the song is finished with an enthusiastic whoop.

In his welcoming address, he introduces himself as Glen Campbell, mentioning that this is the first time he has been to Birmingham. His speech appears excitable and uncontrolled at times, indicative of his great mood this evening. An unusually focussed Love Me is sung next, followed by a superb version of Fairytale where he can be heard instructing his sound engineers to, “Bring the bass drums up” later calling out, “One more time” to extend the song for a further verse.

You Gave Me A Mountain includes various improvised comments and different phrasing; a further sign he was enjoying himself this evening. Jailhouse Rock is performed next, with an extended chorus and ending with another falsetto whoop. After this, he asks Sherrill Nielsen to sing O Sole Mio before It’s Now Or Never, which has an intrusive trumpet accompaniment during the chorus. Sadly this song is incomplete due to tape damage, but runs a few seconds longer here before the sound fades back in to capture the impressive ending.

Trying To Get You is also sung enthusiastically, ending with a whoop, followed by My Way, where he misses his cue with the comment, “longest intro in the World.” He goes on to substitute the word ‘case’ as ‘cage’ (Freudian slip?) and reveals his personal involvement with the lyrics in a burst of emotion, calling out, “You know, you guys know don’t you?” It ends with a higher reach than usual on the last line. A wild version of Polk Salad Annie follows this, with enthusiastic shouting throughout, which ends with him dramatically calling out, “Wind it up…wind it up everybody, wind it up!” Was this the most energetic version since the early ‘70’s? It certainly sounds like it.

The band introductions are next, which include a rare complete version of Early Morning Rain during John Wilkinson’s solo spot, where he urges him to “Keep it going” and drives him on for, “One more verse.” James Burton is asked to play the guitar at the back of his head during Johnny B. Goode, which is then followed by an extended drum solo from Ronnie Tutt. In fact all solos sound fresh and inspired tonight, with David Briggs’ electric clavinet solo being particularly clear due to the binaural mix.

Love Letters is then performed as a tribute to his first recording session with David Briggs. It’s taken slowly to create the appropriate reflective mood, but sadly the tempo drags which serves to undermine the performance. During the orchestra solo which follows, he sings with such abandon that he later remarks, “What was that note I just hit? I just strained a gut.” Afterwards the house lights are turned up for Funny How Time Slips Away, which remain on for the duration of the song at his request. It ends with him saying, “Now I know where you all are, see.”

Hurt is introduced as “One of my latest records” and goes on to receive a committed performance. It’s granted a reprise afterwards, with the justification, “...’cause we can do it better,” which leads to an even higher reach on the ending notes. Light relief in the form of Hound Dog follows this, with distortion due to tape damage evident during the final moments.

After this he asks, “What key did we do For The Good Times In James?” and begins singing tentatively until a crash is heard off-mic. He immediately restarts it, but the band are still hesitant, prompting him to call out impatiently “C’mon, c’mon…..I can’t hear ‘em.”  Sherrill Neilson and Charlie Hodge later join him on the chorus, but the tempo remains too slow to do it proper justice. A welcome surprise nonetheless, as this would be the last ever live performance of this song.

The next song is dedicated to his new girlfriend, Ginger Alden, who was present for this show and the likely inspiration for his enthusiasm tonight. He calls out, “OK we’ll do this song for you sweetheart, First Time Ever I saw Your Face” and proceeds to sing a tender and impassioned version, imploring her to “Listen” at several points. David Briggs is directed to join him for a solo accompaniment on the last verse, which brings an intimate quality to the proceedings. This performance evidently meant a lot to him, as he uncharacteristically responds with an angry “Shuddup” when the crowd starts calling out to him. Afterwards a kiss is clearly audible, though it doesn’t take much imagination to guess the recipient.

He then announces he would like to play the piano and sing Unchained Melody. This results in another heartfelt performance where he calls out the chord changes to highlight his mistakes and later shouts out, “Lay it on me” in the build-up to the climactic ending. After this, he decides to sing Mystery Train on a whim, which leads to another committed and energetic performance with enthusiastic shouting throughout.

This is followed by a short closing address where he simply says “Until we meet you again, adios mother,” before launching into Can’t Help Falling In Love to end the show. During the song he can be heard saying, “Stay here on the very end,” (presumably to Ginger), before an inspired vocal reach and a final “Yeah,” before leaving the stage. The closing vamp follows this, which although longer than we’ve had before, does not include the after show announcements.

After this, there are two bonus tracks containing binaural versions of You Gave Me A Mountain and Unchained Melody taken from the original taped source. Their inclusion here is presumably to illustrate the disadvantages of the original binaural recording and to highlight the relative improvements achieved in this new mix. Whilst the sound does seem to be a little clearer on the unadulterated tape, it is also overloaded and uneven which spoils the overall effect and helps to explain the problems encountered in the restoration; plainly there was no easy way to improve upon the results obtained here.

In conclusion, this was an amazingly inspired show which has achieved legendary status amongst many fans. Elvis seems to have felt he had something to prove to his new girlfriend (Ginger Alden) and put on this remarkable performance for her benefit.  As such it proves totally absorbing and compulsive listening. Although many had hoped for a greater improvement in sound quality, we can at least console ourselves that considerable efforts have been made to achieve this improved result.

As a footnote, it is worth mentioning that another version of this show has been released by a German fan club under the title: F1rst Time in Birmingham. It also has remastered sound, although based upon the original release. In my opinion they have achieved an incredible result, although it is not in stereo and does not have the extra material included on the new upgraded version. Critics may say that it lacks bass in comparison, but the trade off is an exciting and dynamic sound improvement which is immediately noticeable and quite literally jumps out of your speakers at you. Moreover, the missing/damaged parts of the show have been skilfully edited in from other shows and sound great as well. A pleasant and unexpected surprise!