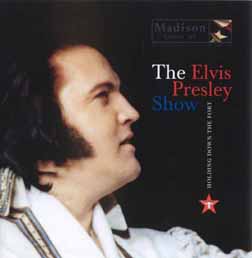 THE ELVIS PRESLEY SHOW--HOLDING DOWN THE FORT

This double CD set on the Madison label contains a soundboard recording of the show and support acts from Fort Worth in Texas, performed on the 3rd June 1976. As this recording was incomplete, it has been made up with four songs which were performed at the same venue exactly a month later, which have been skilfully edited in so that it runs as a complete show. This was unfortunately necessary due to damage and omissions on the original tape source.

Although much of this show has been issued before, on the former Madison title ‘Cajun Tornado’, the sound quality is greatly improved here, sounding both fresh and dynamic which consequently breathes new life into this performance. It’s as if a veil has been lifted from the sound, resulting in increased clarity and depth. In short it’s immediately noticeable and a worthy upgrade.

As we have come to expect from this label, the artwork and 16 page booklet are outstanding and a treat in their own right. There are no less than 39 full colour photos featured, plus a further three of the support acts, together with a comprehensive review of the show itself. Once again, it’s simply superb and an indication of the dedication that has gone into this project.

Disc one features the opening acts and starts with an announcement, “From the Las Vegas Hilton-- Joe Guercio and the Hot Hilton Horns.” The first piece performed is a funky number which wouldn’t be out of place in an episode of Starsky and Hutch from the same period, except that it segues into a burst of Love Me Tender at the end. J.D. Sumner and the Stamps are then introduced and perform a ten minute set encompassing various styles, all with a gospel flavour, providing another chance to experience your speaker cones distorting to J.D.’s vocals. Next, the Sweet Inspirations are introduced and duly perform a seventeen minute set with an emphasis on Soul. After singing two of the current popular hits of the day (Philadelphia Freedom and Lady Marmalade), Sylvia from the Sweets, introduces the band and the other members of the group with a novel twist---by association with their star signs. After the usual coaxing for attention, from what appears to be an unreceptive crowd, a seven minute Stevie Wonder medley is performed, after which sadly, no applause can be heard from this source to reward them for their efforts. However, all in all, it makes for pleasant listening and provides an added dimension to our appreciation of an Elvis Presley show for this period.

Disc two is appropriately titled The Main Event and begins with a clipped intro to 2001. Feedback is apparent early on which continues during See See Rider, with the piano initially high in the mix and the vocals varying in volume up until the instrumental break. However this is soon corrected and afterwards, Elvis proves to be in a relaxed and upbeat mood performing to a very enthusiastic and vocal crowd. I Got A Woman follows, sounding good, leading to a four verse Amen and two vocal slides from J.D, with Elvis commenting, “I can’t applaud too much J.D, I’ll break my rings.” This is followed by two minutes of crowd interaction as Elvis welcomes his audience and attends to his ringside fans, appearing to give away one of his rings in the process. After this he sings a snatch of God Bless America, adding, “I hope you’ve enjoyed the show, thank you and goodnight.”

Love Me is performed next and causes the usual uproar, clearly audible here, as scarves are handed out to the lucky few. The next six songs are new and previously unreleased, starting with If You Love Me which Elvis mistakenly introduces as Let Me Be There, quickly adding, “No, no, no, wrong song If You Love Me Let Me Know….I wish you’d quit doing that Charlie.” He goes on to perform a standard version, but on both this and You Gave Me A Mountain which follows, his voice has a ‘nasal quality’ which is often apparent in shows during this year. In addition, the tempo on these songs appears to drag slightly.

The ‘50’s hits follow this and are introduced by Elvis saying, “I’d like to do a medley of some of my records, Just…. y’know different ones throughout the years.” All Shook Up is first, immediately followed by the Teddy Bear / Don’t Be Cruel medley, which are all sung in the usual fashion and provide further opportunities for scarf distribution. Heartbreak Hotel however, sounds more committed and features prolonged enthusiastic shrieks from one fan in particular, causing Elvis to laugh remarking, “She wanted a scarf bad, didn’t she?”

Help Me is another nice performance and features some inspired piano improvisation from Tony Brown during the second verse. After this, Elvis commands the band to ‘Take it on’ for Jailhouse Rock, which was taken from a later show (3rd July), and features Tony Brown doing a very good impression of Jerry Lee Lewis. In addition, the drums are much higher in the mix, so this version really rocks.

Fever is performed next and during the introduction there is a feedback which leads him to rebuke his sound engineer, saying, “It’s your birthday Bruce….do you want to eat this microphone?” He then promptly forgets which key he is singing in and asks his band for a chord as a reminder. This song provides the usual opportunities for crowd interaction, with Elvis ad-libbing the line, “Fever when you pull my hair,” and laughing out loud at their antics. It’s a fun version and Elvis’ infectious laugh is captivating and adds interest to this performance. By contrast, Polk Salad Annie is a fine version and a real highlight of this show. He performs a committed version and the superb instrumentation can really be appreciated in this sound quality.

The band introductions are next and released here in their entirety for the first time. The Sweet Inspirations are credited with opening the show, providing a nice link to the inclusion of their set on disc one. Elvis later jokes that Bill Baize should be singing bass and not tenor, alluding to the pun on his name, before continuing with the regular selection of songs to showcase the band members’ individual talents. Although these only amount to snippets, Elvis sings them enthusiastically and the band, in turn, play some inspired solos suggesting that this was an above average show for all concerned and not just a routine performance.

During the proceedings, Tony Brown is mistakenly introduced as Shane Kiester (who was the pianist during the March tour this year), with Elvis later compounding the joke by introducing David Briggs as Floyd Cramer. However it’s all good fun, making these introductions enjoyable to listen to on this show. Love Letters however, is disappointing, for whilst it is given a committed performance, it runs painfully slow and sounds laboured as a result. After this Charlie Hodge can be heard reminding Elvis that it’s his sound engineer’s birthday, so Happy Birthday is duly sung to Bruce (Goose) Jackson, providing another nice moment.

Afterwards, it’s back to business with a magnificent version of Hurt, amply demonstrating his unique vocal ability. His voice soars majestically on this number, with a great reach on the ending, resulting in a show stopping performance which he manages to repeat with a full reprise.  As the remaining songs from this show are missing, we once again switch seamlessly to the later show. Elvis’ vocals sound identical and crucially he is in the same relaxed mood, taking time out to attend to his fans. As before, the drums are higher in the mix, so these inclusions have more punch and are consequently in slightly better sound quality.

After Hurt, Elvis is heard laughing and comments wryly, “It’s hard to follow that song with anything, you know that…really.” Hound Dog is then sung in the usual way, but you can tell he’s trying and it’s not a throwaway performance by any means. This is followed by a request for the lights to be turned up and a pause while he gives away his guitar pick to a scarily insistent fan, before singing Funny How Time Slips Away. This contains the lyric change, “Well hello there…my it’s been a month or two,” clearly relating to his earlier appearance at this same venue. Although his voice is powerful on this song, his performance is interspersed with comments to ringside fans who are calling out throughout and typically the last line is repeated to showcase J.D.’s vocal range.

Afterwards, fans still clamour for his attention causing Elvis to say, “Don’t go completely berserk….I’m basically very shy,” qualifying this later with,”….Basically.” Eventually, the female fan in question manages to reach him and we hear a full blown kiss, perfectly captured on this recording, before he starts his closing number, Can’t Help Falling In Love, which features a nice piano accompaniment from Tony Brown. This is followed by the closing vamp and usual announcements, with two additional tracks featuring the damaged and incomplete versions of Jailhouse Rock and Hound Dog from the original recording. Although this bonus is for completists only, it is at least proof that the original performances are indeed identical to the substituted versions.

In conclusion, this is another fine and attractively packaged production from Madison. On disc one, we have the actual opening acts for this engagement, allowing us to appreciate the impact of a complete show from this period and although I suspect this will not be revisited often, it is interesting and entertaining nonetheless. Disc two contains a surprisingly enjoyable performance in good sound, from a year when Elvis was known to be far below his vocal peak. That said, he sings reasonably well throughout this show and there are some good performances. However, what makes this show especially enjoyable for me is his relaxed mood and engaging manner throughout. His indefinable charisma is all over this recording and I therefore recommend it to all likeminded fans.