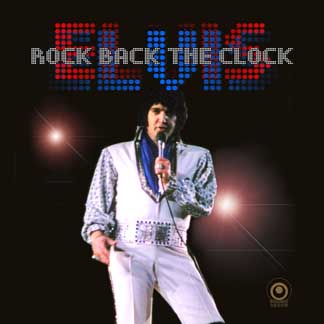 ROCK BACK THE CLOCK

This double CD issued on the Straight Arrow label, contains an audience recording of the show performed at the Pontiac Stadium in Michigan on the 31st December 1975. Although previously released under the title Happy New Year From Pontiac, this new version does not include the pre-show warm up acts which were featured on the former title. However this is no real loss, as the sound quality of these was particularly poor. In the booklet it states that this recording has been taken from a ‘new’ source, which most likely means that this is an earlier generation copy of the original tape, as identical crowd comments and edits can be heard on both releases. Surprisingly, no mention is made that this show is more complete, as it now includes the Teddy Bear / Don’t Be Cruel medley which was missed from the earlier title.

It is issued with an expanded 24 page booklet, containing 30 colour photos from the show, along with liner notes setting the performance in context and featuring two entertaining contemporary views of the occasion. One, a somewhat negative account from the bass player Jerry Scheff; the other a positive endorsement from a fan named Robin who attended the show. Both are fascinating and the booklet includes further facts and rumours regarding the location and event itself, as well as newspaper clippings from the time. In short, everything you could want to know is here. Oh and just in case this wasn’t enough, there are more photos on the inlay tray and back cover, not to mention the discs themselves.

The technical notes state that this recording has been restored and remastered from a digital transfer of the original mono mastertape. As a result, the sound is much better with more depth and punch than the previous release. The notes also detail various repairs and in some cases substitutions that have been made on a few songs owing to damage and omissions on the original source. Of these, the most noticeable is that Sweet Sweet Spirit is now complete, whereas the beginning was clipped on the earlier release. All in all it’s a definite improvement on what we had before.

Throughout the 2001 opening there is an electric audience atmosphere, which rises to a crescendo as Elvis hits the stage for the opening See See Rider. This is followed by a short ‘Well Well routine’ before I Got A Woman, where he sounds to be in top form. The Amen chorus features two vocal slides from J.D. Sumner, with Elvis jokingly taking the credit saying, “It’s actually me, he’s a ventriloquist.”

However, it appears that his stage moves were more strenuous than usual during this performance, because afterwards he addresses the crowd with the following admission, “Y’know  this is the largest audience we’ve ever played to….and I had to go and rip my pants.” Love Me is sung next, followed by a superb version of Trying To Get To You, although his concluding remark, “What we have is a failure to communicate with the band” suggests that even at this stage there were problems with the stage set-up.

And I Love You So features another nice performance, before a run of ‘50’s hits starting with All Shook Up and including the Teddy Bear / Don’t Be Cruel medley that was missing on the earlier release. Heartbreak Hotel and a particularly soulful One Night follow this, which the booklet informs us have been edited in from another source as they were not included on this ‘new’ recording. In fact they were similarly edited on the previous title, but happily this time One Night now runs at the correct speed.

You Gave Me A Mountain is noted in the booklet as having been repaired, but the sound is still variable here as it was on the former release. Polk Salad Annie is also mentioned for being ‘the most intense and menacing version’ ever seen by Robin who attended this show. Afterwards, while recovering from his exertions, he announces, “I got news for you ladies and gentlemen….this is the best New Year I’ve ever had.” He then asks the Stamps to sing Sweet Sweet Spirit before leaving the stage to change his suit.

His reappearance is greeted with whoops and cheers, to which he replies, “You didn’t know I was a quick change artist did you? Of course it took ten people to help me get into this thing.” The group introductions follow, where he ad-libs a few lines of What I’d Say during James Burton’s guitar solo (although they don’t quite match the tune played) and jokes, “Is that it?” in disbelief after David Briggs’ solo on the electric clavinet. Glen Hardin is introduced for the last time here as this would be his final stage appearance with Elvis.

After this he introduces My Way as, “A song we’ve had a lot of requests for…from Aloha From Hawaii,” but adds ominously “I don’t know the words so I got to read it.” However as the song progresses he becomes increasingly hesitant, missing out odd phrases and substituting the word ‘losing’ for ‘laughter,’ before finally calling out, “I can’t read it….hold it a minute man. We’re not hearing each other.” He then decides to restart the song from the bridge, but later misses his cue for the final line which results in him sustaining the word ‘blows’ for several bars, before coming in late to finish it. In short it’s a mess, but despite this is still greeted with enthusiastic and rapturous applause.

Love Me Tender is sung next, after which he announces that it is nearly midnight and invites everyone to join him in singing Auld Lang Syne. A countdown to midnight follows, with Elvis leading the singing early on and later calling out “Happy New Year everybody!” He continues with How Great Thou Art which receives a fantastic performance, saying afterwards, “We’ll do that last part again ‘cause I can do it better.” A short reprise ensues where he manages to reach an even higher ending note.

It’s Now Or Never follows this, which is great up until the final line where he misses his cue, requiring him to repeat it. However he immediately redeems himself with a superb version of America, which duly receives huge applause. Afterwards he thanks the audience for coming adding, “All kidding aside I was very nervous when I came out here and you’ve made it a real pleasure.” He then proceeds to thank his entire group along with Charlie Hodge who he forgot to introduce earlier. He goes on to mention that his father and daughter Lisa are present, before asking the audience what they want to hear.

Several requests for Burning Love can be heard, but instead he launches into a spirited version of Hound Dog. After this he starts singing “Muss i denn, muss i denn” saying, “Ok we’ll do Wooden Heart.” This was presumably for Lisa’s benefit, as he had performed this song earlier this month in Las Vegas when she was in attendance. However, after a few lines he aborts it saying, “I ain’t going to do that,” much to the disappointment of the crowd. The show is then brought to an abrupt end as he bids the audience ‘an affectionate farewell’ before Can’t Help Falling In Love.

Following this are two bonus tracks where Elvis refers to this concert:

The first is taken from the show performed in Seatle on April 26th 1976. Here he mentions his extreme nervousness, as well as his inability to see the clock for the midnight countdown due to the spotlights. He also speaks of his embarrassment at not knowing the lyrics of Auld Lang Syne and blames Charlie for forgetting the song order which resulted in him cutting the show short.

The second is a humorous quip from his performance in Atlanta on June 5th the same year, where he refers to his ripped pants during this show, saying, “It’s a one piece suit and it’s very hard to get out of…..so I was going to put on a diaper and come in as the New Year Baby.” (It’s a lot funnier when Elvis tells it than it appears here in print!)

In conclusion, this is an excellent upgrade of a significant concert in Elvis’ career. Although the show itself is not one of his best, due to various difficulties involving the stage set-up and freezing temperatures, it’s entertaining nonetheless and wonderful to have in this quality. Moreover the production on this new release is simply superb, with a lavish booklet and bonus tracks providing Elvis’ own views of the occasion. As such it remains an essential addition for any live show collection