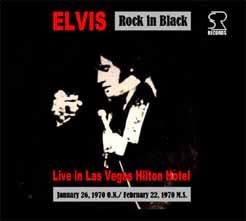 This limited edition release from S+R Records contains a soundboard recording of the Opening show for Elvis’ second season in Vegas, performed on the 26th January 1970, together with an audience recording of the midnight concert from the 22nd February from this same season. It is packaged in a fold out digipac, containing just five black and white photos from this period, most of which have a rather grainy definition. As an added bonus, a tri-fold black and white photo is included, showing another shot of Elvis in one of the jumpsuits previously featured. Although I personally prefer productions which feature a full colour booklet and detailed liner notes, I suppose that this may have a certain novelty value for some. Whatever your view, it’s certainly different.

All  tracks from the opening show have been issued before on several titles, including Fort Baxter’s ‘Walk A Mile In My Shoes’ and ‘True Love Travels On A Gravel Road’ on competing labels, but this is the first time that the complete show has been issued on a single CD in remastered sound. As the original audio source was overloaded with damage to the master tape, improvements can only be limited, but the overall result is certainly a smoother listening experience where the distorted peaks are not quite so jarring and noticeable as before.

The show opens to a drum riff which builds into the introduction to All Shook Up, the new opening song for this season. This is sung with a focus and passion that leaves no doubt to his commitment this evening. Afterwards, he introduces That’s All Right as his first record and performs a deliciously raw version. He then welcomes his audience, mentioning that he would like to do some songs that were recorded by ‘other people and different things.’

Proud Mary follows as the first of the new songs for this season, which is taken slowly and deliberately, ending on a simple drum roll. Afterwards, he excuses himself for his need to continually drink water during the show, explaining that “it’s awfully dry in Las Vegas and singers get what’s called a ‘Vegas Throat.”  He goes on to introduce Don’t Cry Daddy as his new record adding, “I hope you like it.” This receives a sincere and moving performance with the superb orchestration greatly adding to the poignancy of this song.

He then announces that he would like to do, “a couple of songs I recorded about 1929 or whenever” and proceeds to tune his acoustic guitar accordingly. A medley of Teddy Bear and Don’t Be Cruel follows this, which was the first ever outing for this song combination and is performed with an edge and commitment unmatched in future years. After this, he introduces the next song as ‘his message song for the night,’ before launching into a furious rendition of Long Tall Sally. This proves to be a wonderfully aggressive and impassioned performance which was a regular highlight during this engagement.

Let It Be Me was another new song this season and receives a tender and passionate interpretation, before I Can’t Stop Loving You which is taken at a slower pace with Elvis calling out, “I kinda like this one” during the performance. This is followed by Walk A Mile In My Shoes, which is linked to In The Ghetto with a short guitar bridge in a new arrangement providing the true ‘message song’ for this engagement. All of these songs from the first half of this show were previously released on the Fort Baxter title.

The second half of this show was previously released by two labels simultaneously under the title ‘True Love Travels On A Gravel Road,’ which was the next song performed at this point. After plugging his latest album, Elvis In Memphis, a false start ensues but he goes on to perform a full version ending with an orchestral blast where it fades out on the record. It sounds to me to be a very effective arrangement and so becomes a mystery why this was never included in future shows. However this in turn makes this show very special.

Afterwards he mentions that the next song was recorded in Memphis and was one of the biggest songs of the past year, before continuing with his first ever performance of Sweet Caroline. Unfortunately, this version is not the best, sounding a little tentative and under rehearsed. Towards the end, the band finish the song prematurely which is then re-started with both Elvis and his backing singers subsequently mistiming their vocals. “Hold on, we blew that wide open, start again,” Elvis calls out, adding later, “Well that’s four mistakes tonight…”

“Let’s go down Louisiana baby,” serves as the introduction to Polk Salad Annie, which was another new song this evening. Once again, it is taken slowly, but given an energetic workout because at the end he says, “It’s getting to be a bit like work now up here.” The band introductions are next, which include a mention for Bob Lanning who was the new drummer for this season and Glen Hardin, his new pianist who is also credited with arranging Let It Be Me and ‘a couple of other songs.’ Charlie Hodge is also jokingly referred to as “Least but not last.”

His new single Kentucky Rain is sung at this point and is followed by a show-stopping performance of Suspicious Minds which duly receives generous and appreciative applause. Afterwards, he announces, “I’d like to do this song, especially for you,” before starting Can’t Help Falling In Love as his closing number, but unfortunately the CD ends 13 seconds into this song as the whole performance was not recorded.

Disc two contains another show recorded later during this engagement, but in below average audience recorded sound quality. The show is not without interest, but the main problem here is the difficulty comprehending the dialogue due to the variable sound. Overall there is a lot more joking and banter with the audience, which culminates in the band introductions, where everyone with the sole exception of Jerry Scheff is introduced under fictitious names. I Got A Woman and Suspicious Minds are stopped mid-flow due to mistakes, before being quickly resumed or aborted altogether in the case of In The Ghetto. This must have been disappointing for those present, as this particular song is greeted with enthusiastic applause at the outset.

I Can’t Stop Loving You is played at a faster tempo compared to opening night and Walk A Mile In My shoes is also more accomplished, with See See Rider being another new song regularly performed during these later shows. Jerry Lockwood who appeared with Elvis in It Happened At The World’s Fair and Kenny Rogers are among the celebrities introduced later in the show and finally, Can’t Help Falling In Love contains the ad-lib, “Wise men say only girls rush in,” sung at the outset of his closing number.

After this, four songs from the earlier dinner show are included in inferior sound quality, which completely lack depth and are drenched in echo. They are all repeat performances from the other featured shows and therefore appear to be superfluous here, adding nothing to what we already have.

In conclusion, this is an interesting rather than an essential release, with its main advantage being the re-mastering of the complete opening show on a factory pressed CD. This show is certainly essential, containing an unbelievable eleven first time live performances out of the fifteen songs covered, and whereas the upgrade in sound quality is slight, it is easily noticeable and obviously nice to have. The other disc is interesting but flawed and aimed at completists only. As a result, there is a dilemma here which will have to be individually resolved by anyone considering this purchase for their collection. I admit it’s not easy, as in my view, the re-mastered opening show would have made a great release in its own right, especially when accompanied by colour artwork and the now mandatory attractive booklet. If only things were that simple….