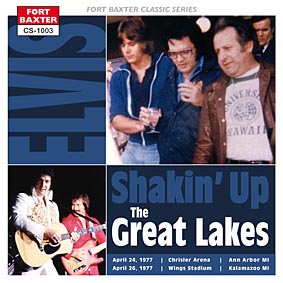 SHAKIN’ UP THE GREAT LAKES

This CD, issued under the Fort Baxter label, contains soundboard recordings of performances from Ann Arbor and Kalamazoo on the 24th and 26th April 1977. Although both shows are incomplete, they now contain more songs than when previously issued on the first Profile Box set and Memories From Kalamazoo respectively. The artwork and design are once again superb, consisting of a 12 page booklet containing eighteen full colour photos, with four more on the back cover and inlay tray. Frankly the production on releases like these are reason enough to purchase them alone and that’s before we’ve even discussed the content.

The sound quality has also been upgraded and is now much more dynamic, especially noticeable on the Ann Arbor show. This has been achieved by a trade off in noise reduction, so unfortunately there is an increase in hiss, but the result is a lot more punch, compared to the rather flat sound we have had before. In particular, the rasping brass section adds vitality to these performances and allows us to appreciate these shows anew.

The first show featured is from Ann Arbor with the first song recorded being Love Me which was missing from the earlier release. The beginning is clipped and Elvis can be heard laughing out loud during the song, presumably whilst handing out the usual scarves. After this, the songs follow the same sequence issued before, continuing with a great version of If You Love Me Let Me Know. You Gave Me A Mountain is sung next, with the count in now clearly audible at the start. It is also an excellent performance, together with Trying To Get To You, which Elvis introduces as “My special request.”

It’s Now Or Never has a false start due to Elvis mixing up the lyrics and features a rather intrusive trumpet accompaniment as was common in the arrangement for this year. Then, after introducing the usual medley of early hits, he laughingly accepts a request for Blue Hawaii adding, “Watch the musicians panic.” However, even though he sings the first line several times, his pianist has trouble finding a key, prompting Elvis to say, “Well do something Tony, right or wrong it don’t matter.” Unfortunately this encouragement produces no result, so Elvis chooses to sing Little Sister instead, leading into the usual Teddy Bear / Don’t Be Cruel medley. A golden opportunity missed here I’m sure we all agree.

Help Me is sung next, then a superb version of My Way, resulting in a well deserved 20 second ovation. Polk Salad follows this with the comment, “Yeah lord….get ready to really test the suit out on this one.” He goes on to perform this song with real enthusiasm, calling out the ‘Chick-a-boom chorus’ previously sung by his backing groups in earlier years and shouting out repeatedly during the instrumental climax.

The group introductions are missing here from this recording, so Hurt becomes the next featured performance. The shrieks during the opening instrumental build up, cause Elvis to laugh before an impressive start to this song, but sadly his voice sounds ragged on the ending, causing him to remark, “Can we re-do the ending?... Just the last part, because eight frogs jumped down my throat.” Although the ensuing reprise represents an improvement, we have heard him do better. A loose version of Hound Dog with mumbled and missing lyrics follows this, which is new to this release.

At this point, Elvis announces, “If you don’t mind, I’d like to play the piano and do a song called Unchained Melody.” It proves to be a fabulous version, at least up until the falsetto ending, which he just misses leaving the final sustained note to Sherrill Neilson. He later acknowledges this saying “Thank you…I have done it better.” This mistake was corrected and Elvis’ rather rudimentary piano chords were also overdubbed for inclusion on the Moody Blue album. Little Darlin’ which he sings next, is also performed well and featured on this same album, only this time he has no trouble and executes the falsetto ending perfectly. Both of these songs were only sung once during this tour and serve as further indication of Elvis’ relaxed and great mood for this show. Afterwards, Can’t Help Falling In Love is sung with a great vocal reach at the end which closes this enjoyably upbeat show.

Immediately following this are tracks from the show in Kalamazoo, recorded just two days later, but his performance is decidedly variable here. The sound is not quite as good for this show, proving very similar to the previous release and Elvis appears tired, with his voice showing signs of strain at times. Once again, the first song recorded is Love Me, only this time his backing singers are made to sustain the ending note for over ten seconds before he eventually decides to end it.

After this he begins Fairytale, but forgets the lyrics on the second line so brings it to a halt saying, “Let’s do the other song—If You Love Me.” This version was subsequently re-mixed and overdubbed for inclusion in the Moody Blue album, giving it a much fuller sound. On this recording, Sherrill can clearly be heard singing along, becoming almost a duet on the second verse. You Gave Me A Mountain is performed next, but not too seriously as he laughs and makes several lyric changes and afterwards there is some audience interaction before a throwaway Jailhouse Rock.

A standard version of It’s Now Or Never follows this and afterwards Elvis pauses to consider the next song saying, “I’ll tell you what, let’s do Big Boss Man.” This is given a good performance with excellent orchestral backing from the brass section. At the end he laughs, commenting wryly “It’s been a long time son.” During his introduction of the ‘50’s hits medley, he is again thoughtful saying, “I’m trying to do something I haven’t done with you before.” He considers Trying to Get to You, before eventually deciding to sing Heartbreak Hotel which was not a regular inclusion for this year. However although he tries hard on this song, his voice is demonstrably weak and to compound the disappointment, microphone problems develop during the second verse causing the sound to become intermittent.

Blue Suede Shoes proves similarly disappointing and problems with the sound system persist, resulting in a false start to And I Love You So and a delay whilst the microphone is replaced (at Elvis’ request) has been edited out here. However he goes on to deliver a great version, with the sound level increasing during this song and adding more punch to the end of this recording. My Way is performed next and is another superb reading, receiving huge applause afterwards. Once again the introductions and group solos are missing here, so we jump straight to a throwaway Hound Dog, followed by an equally lack-lustre Can’t Help Falling In Love, where Elvis can be heard kissing his fans and laughing out loud at their antics. Both of these songs are new to this release, with the recording ending during the closing vamp.

In conclusion, this is another high quality production, featuring stunning design and artwork and representing a significant upgrade of the two previous releases. The first show featured is surely one of the best shows available in soundboard quality for 1977, and the second makes an interesting bonus. This is yet another outstandingly attractive release from this series of re-issues and accordingly deserves a place in every collection.