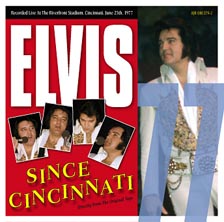 This release contains a stereo audience recording of the concert performed at the Riverfront Stadium on June 25th 1977. It was Elvis’ penultimate show and was previously issued under the same title back in 1990, though by all accounts it was a strictly limited release as original copies have been both reported as hard to find. This time, it has been re-issued with new artwork and improved sound, giving fans a chance to update their collections accordingly.

Disappointingly it does not have a booklet in keeping with other recent re-issues, but despite this the fold over cover and inlay tray contain a total of twelve full colour photos from the period, which certainly amounts to a far superior presentation compared to the earlier release.

The sound quality is also slightly improved, with a reduction in hiss and a little more clarity and depth than before, but I must emphasize that the difference is only marginal when compared to the original release. Overall it still remains somewhat distant, capturing the echo of the auditorium and as such proves very atmospheric. However, although the band instruments lack clear focus, the crowd reaction is so overwhelmingly positive it is both enjoyable and exciting to listen to.

The recording starts with two songs each from the Stamps and the Sweet Inspirations, who performed the opening acts at this time. This is a nice inclusion and helps us appreciate the actual build-up to Elvis’ show for 1977. The songs featured are all well received, with a superb version of If You Leave Me Now from The Sweet Inspirations especially worthy of note.

After a short pause, the familiar strains of 2001 fill the auditorium, accompanied by excitable screams and shouts and when Elvis finally appears on stage, the audience response is so overwhelming in its intensity it proves exciting enough to give you goosebumps. See See Rider follows, with Elvis’ commanding vocals rising above the clamour to provide the usual effective opening. Afterwards he says, “I’d like to apologise for being a little bit late, but I had to go to the dentist and we had sound trouble.”

The ‘Well Well’ routine is greeted with further enthusiastic screams and during I Got A Woman, the clicking action of a 35mm camera can be heard taking photos, which continues regularly throughout the show. Elvis concludes with a typical four verse Amen covering three key changes, before J.D. is instructed to ‘help him out,’ with his trademark vocal slide.

He then welcomes his audience, reminding them that it is Saturday night followed by the teasing retort, “….and I just got paid,” citing the lyric from his ‘50’s recording of Rip It Up. After spending some time with his ringside fans, he mentions that they have a new drummer this evening, adding, “…..but he’s just as crazy.” This was Larrie Londin, who was drafted in to replace Ronnie Tutt for Elvis’ last two shows on this tour apparently due to a family crisis. After this, Love Me is performed as normal at this point of the show.

The next song is introduced as, “If You Love Me Let Me Know—and if you don’t, you should do!” The crowd pick up on the infectious beat and can be heard clapping along, allowing us to appreciate the pervading upbeat atmosphere along with the vast acoustics of the auditorium itself.

A good powerful version of You Gave Me A Mountain follows this, before an energetic and committed two verse Jailhouse Rock, which is greeted with appreciative cheers and enthusiastic clapping throughout. Afterwards he says, “In 1960 we did a song called It’s Now Or Never….and it turned out to be not a song, but a situation.” A standard version of this is then performed, complete with the usual O Sole Mio introduction.

Little Sister is sung next and proves particularly popular with a female fan close to the recorder who can be heard singing along at the start. Larrie Londin’s drumming is also worthy of note as it provides a different feel to this performance. There appears to be an edit just before the Teddy Bear / Don’t Be Cruel medley which is also received very enthusiastically, with the crowd going wild during this performance.

After this there is another edit, before Elvis introduces the next song And I Love You So. He immediately corrects himself saying, “And I love HER so….whatever” and sings the first line in the same fashion, following with his usual heartfelt and moving interpretation. My Way continues the introspective mood which again is well sung with an impressively strong ending.

The group introductions which follow are conducted rather hesitantly and are not complete on this recording. John Wilkinson is introduced as Wayne Newton, before a shortened version of Early Morning Rain which is nicely sung, followed by less committed performances during James Burton’s solos. At this point this there is yet another edit, which misses out the remaining group solos. I Really Don’t Want To Know is performed next to great effect, but proves disappointingly short, providing only a glimpse of what could have been a real highlight for shows during this tour.

After this, he introduces his father to the audience, along with his girlfriend Ginger and the rest of her family. He also mentions the presence of 300 fans from England, before announcing the next song to be Unchained Melody adding that, “It will be on an album that will be out in 1987.” This is given a tender and measured reading, with the fragility of his performance exerting its own particular fascination. He changes the lyric to ‘hungered for your KISS (instead of touch) and later relies on help from Sherrill Nielsen to sustain the falsetto ending.

Immediately afterwards he launches straight into Hound Dog, to lighten the mood, but as usual it’s a weak version for this period. This is followed by his closing number, Can’t Help Falling In Love where he manages a powerful vocal reach during the rousing ending. Both the complete closing vamp and the ubiquitous souvenir announcements are included to round off this CD.

In conclusion, this recording perfectly captures the ambiance and exuberant atmosphere of this event and is consequently very entertaining. However to be frank, it is no more than an average show for this period, but packs a considerable emotional punch for being the penultimate concert before his untimely death. Although it is disappointing that it has been re-issued without a booklet, this production is still an appealing upgrade with attractive artwork and improved sound. For these reasons I still feel that this is a worthy addition to any collection.