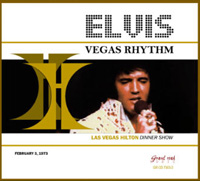 This CD is issued by the new Gravel Road label and contains the Dinner show recorded in Las Vegas on the 3rd February 1973. This show was previously issued by Fort Baxter under the title It’s A Matter Of Time and because the sound quality on that release was so good, this re-issue has prompted many questions regarding the true extent of any possible up-grade. Claims were made that the sound was far superior and that the show was now more complete, but repeatedly it was asked whether this could possibly be true. Hopefully, we have now arrived at the truth.

It turns out that the producers’ definition of ‘more complete’ is correct up to a point. Both CD’s are identical in running time right up until the final track, which is approximately 20 seconds longer on the new release, as it appears to include the ‘closing vamp’ that was missing from the original issue. However, it has recently transpired that this is NOT the actual ‘closing vamp,’ but an edit from the OPENING vamp of this show, masquerading as the closing play-out in order to make a more satisfying end to this CD. It goes without saying that this is not what we would normally expect from a description of ‘more complete,’ which would usually be taken to mean more material perhaps from a different or better source. So because our expectations were raised and subsequently dashed, it has inevitably attracted some unfavourable criticism regarding this claim.

The other pertinent question concerned the extent and difference in sound quality. The sound is now unquestionably more powerful and dynamic, but can appear a touch overloaded on occasion, as the overall level has been lifted considerably. Certain songs definitely benefit from a better balance, especially Until It’s Time For You To Go and I’ll Remember You, which were a bit quiet on the initial release. Steamroller Blues and Johnny B. Goode are also superb, focusing on James Burton’s guitar which is so up-front it appears to be in the room with you! However, it’s possible that it may sound a little unnatural to some, especially if you are familiar with the earlier release, but I am being very particular here and am certain that this will not trouble the vast majority of fans who will undoubtedly appreciate the different effect.

The presentation is superb, consisting of a lavish 20 page booklet containing nineteen colour photos from this period spread throughout the artwork and inlay tray, which provide a good impression of how Elvis looked as he performed at this engagement. The booklet is designed as a photo album tribute to Ed Bonja and also features a couple of contemporary reviews. The back page includes details regarding the ‘improvements’ that the producers have made, which include re-editing and listing the correct date for this show, although sadly the previously incorrect date is still showing on the artwork of the jewel case. Re-editing was also necessary due to mistakes in the indexing of individual tracks on the earlier release, with some songs even sharing the same track listing. Happily this has now been corrected on this re-issue.

For those of you unfamiliar with this show, it is very similar in feel to the Aloha concert, but I Got A Woman, You Don’t Have To Say You Love Me, Until It’s Time For You To Go and Love Me Tender are now included in the set-list which makes an enjoyable change. Although Elvis does not engage much with the audience, I cannot subscribe to the view held by some that this was in any way a mediocre concert, as his singing is entirely focussed and he produces some fine performances with no sign of the throat problems that would develop later during this season. In fact, I would personally rate this show better in both performance and sound to the Aloha concert, making it an essential inclusion in every collection.

The show begins in the usual fashion, with See See Rider as the opening song sounding almost identical to the Aloha version. This is followed by I Got A Woman, which is taken at a slightly slower pace and features a stripped down arrangement at the start, sounding much closer to the tempo and feel of Ray Charles’ original hit. It proves to be a great version and ends with one verse of Amen and a vocal slide from J. D. Sumner, with Elvis remarking, “That wasn’t all that good, really.”

Until It’s Time For You To Go is performed next, immediately followed by You Don’t Have To Say You Love Me. Both are fine performances, with superb orchestration which can be heard to great effect in this sound quality. Steamroller Blues follows this and proves to be another wonderful performance, far surpassing the Aloha version in my opinion. The sound, as I have mentioned previously, is amazing on this track. You Gave Me A Mountain is great as usual, then Fever, where the audience can be heard laughing and clapping in appreciation at his scarf giving antics. This song also features some great improvised drumming which makes this version a delight to listen to.

After this, he introduces a medley of some of his hit records, starting with Love Me. This provides a further opportunity for scarf distribution where he is heard telling one greedy fan, “You’ve already got one,” during the usual kissing routine. A shortened Blue Suede Shoes is next, followed by Love Me Tender with more front row interplay where he remarks, “You won’t get nothing for nothing baby,” before kissing the fan in question. Johnny B. Goode follows this and sounds simply sensational in this sound quality.

After a teasing introduction, a two speed Hound Dog is performed next, followed by an excellent version of What Now My Love. It’s quite simply the best I have heard with every word imbued with feeling. Suspicious Minds also receives a fine performance and includes the ad-lib, “I can’t walk out now….because I’d be in trouble baby.” Later during the song, he comments on the seating arrangements saying, “If you tip the Maitre‘d enough he’ll hang you on a swing over the stage.” The group introductions follow, where he mentions that Kathy Westmoreland had previously been absent with the flu and Charlie Hodge is once again referred to as General Flunky.

I’ll Remember You is introduced as, “a song we did just recently for a charity show in Hawaii.” It proves to be another great version which benefits greatly from the re-balanced sound. I Can’t Stop Loving You is also superb, with a tambourine clearly audible in the mix from the second verse onwards. American Trilogy is every bit as good as the Aloha version, where Elvis can be heard calling out and shouting at various points due to the emotion generated by this song. During Can’t Help Falling In Love, he makes a final round of his front row fans before performing a magnificent powerful vocal reach on the ending notes. This is followed by the aforementioned 20 second edit which forms the closing vamp to end this CD.

In conclusion, this is an excellent concert which has been attractively packaged, nicely re-edited and issued in noticeably different sound quality to provide an exciting listening experience. As such, I have no hesitation in recommending it as a very worthwhile up-grade. Is the sound better than before? That is a question that is too subjective to answer definitively, but I feel each release has its place. If you require a simulated live experience, then I would reach for Vegas Rhythm. If however you were in a mellower mood and wanted more of a lower volume ‘easy listening’ experience, then I would look out the Fort Baxter release. I’ll wager that Vegas Rhythm gets played more often though!