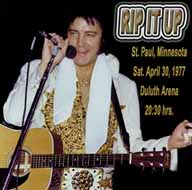 This is the 2nd release from the Memphis sound label, their first was "The Complete Dressing room session". This time we have a little above average audience recording of the April 30th, 1977 St. Paul, Minnesota concert. It's an average show from an uninspired tour. The highlight of this concert is were Elvis asked the audience which day it was, and started with the very rare "Rip it up". Interesting for the collectors would be the bonus songs, but unfortunately they are not in the best quality. This release is only interersting for the die-hard collectors.