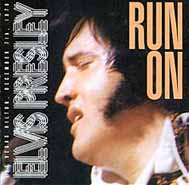 December 7th, a date which will live in infamy? This decent quality 1976 soundboard recording comes smack dab in the middle of Elvis' final visit to Las Vegas (15 shows in two weeks), from an up and down year by anyone's standard. Unlike his bright tour at the end of the month (now documented on "private" releases of spectacular gigs in Birmingham, Alabama and Pittsburgh, Pennsylvania) this show is like listening to a ghost. Given the spate of saddening recent soundboards from 1976, anyone who has heard the Birmingham or Pittsburgh knows that Elvis still had the ability to sing and entertain like no one else, when he so desired. In Las Vegas there is no desire, no joy and very little energy to spare -- he's a dead man walking.

The typical Las Vegas audience is one of the most impassive a performer can play in front of (no matter how great the act, they'll just sit on their hands like zombies) and it's obvious just how much Elvis hates playing there. This is the Vegas visit where he sat in his room and wrote philosophical notes of despair that Wayne Newton later bought at an auction. Perhaps this is one of those gigs where "Colonel" Parker dunked his head in a bucket of ice water to rouse him enough to make the show. He's exhausted from the first moments, complaining of a pinched nerve in his right foot making him late, and his voice throughout is flemmy and weak ("I got 17 frogs, all in my throat ... if you see me turn around and spit ... "). There's a draggy feel to the performance, which also proves that when Elvis switches to low gear so does the band.

Six songs into the set Elvis sits for some acoustic numbers led by his half-hearted guitar playing -- he claims the key of E is the only one he knows -- from the 1968 TV Special we all know how good he really was. "That's All Right, Mama" falls apart towards the end while "Blue Christmas" is just 86 seconds from start to finish, and it's a mid-tempo song!

"Softly As I Leave You" does merit a sincere treatment and songs like "Fever" and "Love Letters" emerge unscathed as well. He does "part of Hound Dog" as a request (the standard trashed version) and engages in amusing banter with a German fan but the best is saved for last.

At the point where it's usually the show closer "Can't Help Falling In Love" and a quick exit, he asks the audience if he "can do a couple of spiritual songs" -- someone yells out "you're the King" and he says "thank you sir, I'm fixin' to sing about Him". The Stamps are instructed by Presley to gather around the piano as Charlie Hodge plays and takes the lead (and Elvis takes the bass line) on "You Better Run" and "Bosom Of Abraham", recalling a similar scene from 1972 in his final film, the documentary "Elvis On Tour". The jam session only lasts about a minute and a half but it's a wonderful moment -- he seldom performed these numbers on stage and it's obvious how much they meant to him. Too bad he didn't actually tackle (as the title of this album implies) the gospel song "Run On" as well.

The disc finishes with the standard outro vamp leading into a pre-recorded pitch for a Christmas heart charity -- it's kind of weird, because if anyone needed a new heart that December, it was Elvis.