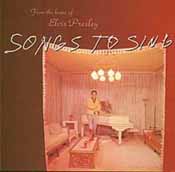 I'm beginning to forget you
Mona Lisa
My heart cries for you
Dark moon
Write to me from Naples
Suppose
Are you sincere
Sweet Angeline
Spanish eyes
Baby, what you want me to do
I'm so lonesome I could cry
Rocky top (Instrumental)
Spanish eyes
That's all right
See see rider
Moody blue
Hurt
Love coming down
Way down (f.s. # 1,2)

Finally, an Elvis "private release" that's a disc worth savoring! Some of my favorite Elvis moments are ones where he's singing with just his own guitar (like "My Happiness" from 1953) or piano (the great "Unchained Melody" from 1976/77) accompaniment. Usually the soul of the man comes shining through. On 'Songs To Sing' we get to hear home demos from the early sixties to the mid seventies, all quite listenable (despite it being one-mic-and-a-tape machine stuff) rounded out by some undubbed Graceland sessions from 1976 in very good quality.

The unifying theme here is it that all of it was taped inside the walls of Graceland, save two from his Palm Springs home. However, I think both "I'm Beginning To Forget You" and "Mona Lisa" are from Germany or Paris in 1959/60, not Memphis. Why would Elvis deign to have Charlie Hodge (or whoever) "order me some boiled eggs"? Since when does one "order" from their own house? And "Suppose" has always sounded like the 1967 Nashville studio version, just mixed down to contain Elvis' voice and a piano.

Some of this material has been heard before, on the 1985 'Golden Celebration' box and other stray RCA releases, but it's nice to have it all in one place. "Dark Moon" in particular is a real treat, as Elvis (with Charlie Hodge on harmony) works his way through 6 minutes of the song, playing those gutsy bass string runs we all became familiar with on the '68 TV Special. This outstrips anything he was doing for the movie studio soundtracks at the time (1966) -- too bad we never got a studio performance.

Anyway, there's a lot I've never heard, like the June '74 material, including a nice and bluesy "Baby, What You Want Me To Do" and the definitive Elvis performance of "I'm So Lonesome I Could Cry" (I think he knew what that song was about). It's also cool to note that he could still give "That's All Right, Mama" an understated reading as late as 1974 (as opposed to the showy, rushed stage rendition).

The Graceland session outtakes and alternates from February and October of 1976 surprisingly reveal a still somewhat involved artist -- like similar material on the 'Platinum' box set this year, I think a serious remixing and un-dubbing should be given to the best tracks. They're much better that way. "Hurt" is the released version without the strings and voices (Elvis' voice loses the last note, it's still a great number). "Way Down" is preceeded with a comment from Elvis (about the Jungle Room "studio" setup) that "it's like a battlefield" -- followed by his infectious laugh. It's worth the price of admission right there. In case you haven't guessed, this one is highly recommended.