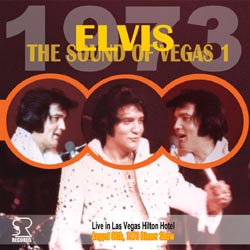 THE SOUND OF VEGAS VOL 1

This CD from S+R Records features an audience recording of the dinner show recorded in Las Vegas on the 8th August 1973. It is presented with a rudimentary 8 page booklet containing several period photos and liner notes stating a departure from their previous focus on 1970-71, with plans for a series of related releases from 1973-74. Although the presentation here is adequate, it in no way matches the standards of artwork and production found on the Straight Arrow or Madison labels which is a shame. On a more positive note, the sound quality on this release proves to be very clear and upfront, although a touch overloaded and harsh at times. Overall however, it is still much better than average for an audience recording.

The CD starts during the instrumental intermezzo before the 2001 introduction. Around 40 seconds in, the sound distorts for a few uncomfortable moments indicating tape damage, but fortunately this soon passes without further incidence. Elvis sounds in good voice for the opening song, See See Rider and I Got A Woman features two vocal slides from J.D. with Elvis commenting, “It’s early and he’s not quite as low as he should be.” Afterwards he must have thrown his guitar awkwardly at Charlie Hodge, as he remarks, “Honey it scares me too, every time I throw that thing.”

He then welcomes his audience, before starting Love Me. After a couple of verses, his band go to end the song prematurely, but Elvis calls out, “No no, that’s not the ending fellas, we usually do two verses there…I know we’re all asleep…” and continues for a final verse. A good version of Steamroller Blues follows this, after which he announces, “I’d like to get serious for a second.”  “That’s it,” he jokes after a momentary pause and immediately starts You Gave Me A Mountain. This is performed well as usual and is followed by Trouble, with a rather tame guitar solo from James Burton.

The ‘50’s hits lead on, starting with Blue Suede Shoes, then a rock medley consisting of; Long Tall Sally / Whole Lotta Shakin / Mama Can’t Dance / Flip Flop And Fly / Jailhouse Rock / Whole Lotta Shakin. It provides an entertaining energetic work out, but the drawback is that all the songs featured in this fashion tend to sound the same. Love Me Tender follows this, allowing him an opportunity to recover his breath, before a two speed version of Hound Dog which concludes this section of the show.

Fever is performed next and proves to be a real highlight on this CD. It features a long introduction, with the familiar bass riff echoing around the showroom creating a moody and atmospheric vibe. Elvis improvises a soulful “Never know how much I love you” on the first line, and the inflection in his voice, together with the prevailing acoustics create an appealing intimacy. As usual there is a fair bit of audience interaction during this song and at one point he looses concentration saying, “What’s the next verse? …The building’s burning up y’know.” All told, it’s a relaxed and charismatic performance.

The Teddy Bear / Don’t Be Cruel medley follows this and on What Now My Love there is a mistake during the opening introduction. Unfortunately his band were not quite synchronised, causing Elvis to call out, “Cut…we weren’t on the gas.” However he quickly restarts it and performs another great version. Suspicious Minds is sung next followed by the band introductions, which are relatively brief at this time.

Afterwards, he introduces My Boy as a new song for this season, commenting, “It’s got beautiful lyrics.” Although he sings it well, the orchestra proves a little intrusive, which is not helped by some distortion during the louder passages on this recording. A great I Can’t Stop Loving You follows this, leading straight into American Trilogy which receives a rapturous ovation with persistent calls for ‘More.’ Elvis responds to this saying, “Want to hear more…. one more time….starting from where? It’s about fourteen minutes long.”

However, at this point someone requests How Great Thou Art, which he decides to sing instead. As he starts singing the opening line (Oh lord my God), a noise is just about discernable off mic, causing him to remark, “What was that noise? God don’t make that kinda sound,” before resuming his vocal for another great version. Release Me is sung next, at a faster tempo than before, after which he closes the show with Can’t Help Falling In love as usual. The CD ends during the closing vamp.

To sum up, this is a fast paced and focused show in above average sound. All songs are sung well throughout, although banter between songs is kept to a minimum and he appears tired when he talks. Despite this, it is still an entertaining performance with a moody and atmospheric Fever being a particular highlight for me. In short, this is another decent sounding show which grows in appeal with repeated plays. Worth serious consideration.