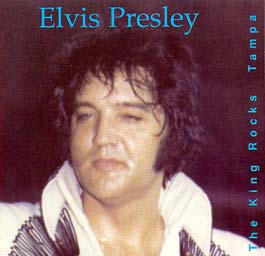 This cd represents a big trip down memory lane for me. On April 26, 1975 I was twelve years old and sitting in Sec S, Row 24, Seat 8 of Curtiss Hixon Hall, Tampa, FL and waiting for the start of Elvis' matinee performance. I could not remember much about this show until I heard this cd, and then it all came back in focus.

I remember sitting through all the warmup acts and thinking, "how much longer?" Then the lights went down and "2001" began as the spotlights started to sweep back and forth across the stage. Ronnie Tutt began a long drumroll and then the opening riff of "See See Rider" followed with Elvis stepping into the spotlight, greeted by an artillery barrage of flashbulbs and a hugely enthusiastic reception.

This cd starts off with strong versions of "See See Rider" and "I Got A Woman." Elvis then introduces himself as Wayne Newton and says, "it's nice to be back in Jacksonville!" He got it backwards the day before and this was probably due to the fact that he stayed at the Dutch Inn in Lakeland during his four day swing through Florida and forgot which city he was playing first. He then follows with good versions of "Love Me" and "If You Love Me (Let Me know)." Next are fairly standard efforts on "Love Me Tender" and "Teddy Bear/Don't Be Cruel." "One of our recent records" introduces "It's Midnight" and is a standout effort. Elvis quickly follows with an energetic "Burning Love," hitting all three verses word for word. This brings us to the group introductions and they feature well done solo's from James Burton, Ronnie Tutt, and Glenn Hardin.

Elvis kicks off the second half with a solid rendition of "MY Boy"; and then introduces Mr. and Mrs. Renaldi, who made all of the scarves and advertising materials throughout his career. "We have a new record out called T-R-O-U-B-L-E, and we don't know it that well so we're are gonna have to read it." "I'm not kiddin' you, there's an awful lot of words in that song, and if you get behind, there's no way to catch up!" After that great intro Elvis delivers a strong performance and then gives a beautiful effort on "I'll Remember You." One of Elvis' favorite songs from the 70's was "Let Me Be There" and this is another good effort. A well done "An American Trilogy" is greeted by a standing ovation at it's conclusion. "Funny How Time Slips Away" is next and fairly standard. Then Elvis delivers two solid performances of early hits. "That's All Right" rocks from the first chord and is followed by a slow, bluesy "Heartbreak Hotel." "Can't Help Falling In Love" brings the show to a close, but not before the fans tried to pull Elvis off the stage with the Memphis Mafia hanging on for dear life.

This was a very good show, particularly for this tour. Although it's an audience recording, Elvis and the band can be heard throughout so it's not a total loss. This would make a great soundboard if anyone has a tape, as it's a much better show than the one from Jacksonville on 4/25/75.

Thanks to Sami for the scan!!!