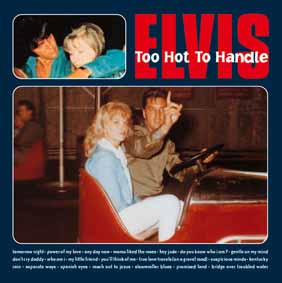 Too hot to handle

Another entry into the ever-growing world of Elvis Presley "import" compact discs, 'Too Hot To Handle' is a real puzzler.

Housing twenty excellent quality cuts in rough chronological order, in nicely designed front and back color covers, this appears to be a worthy addition to the hard-core collection. But where are the liner notes or recording details? Why are these songs "too hot"? The makers don't tell us! Perhaps this is a clue to the true worth of the CD. There are more hints within.

Following an extremely out of place, Mar'65 overdubbed "Tomorrow Night" in the top spot, a flurry of tracks from Elvis' triumphant Memphis sessions in Jan/Feb'69 are next. They remain wonderful listening, despite being mostly undubbed or alternately mixed masters, due to Presley's vocal engagement, Gene Chrisman's magnificent drumming and the superb songwriting and arrangements. God bless Chips Moman and American Studios!

At least a few of this baker's dozen have been liberated from the 'There's Always Me' collections, it seems. The undubbed "Gentle On My Mind" is the same alternate mix, fast-pitched master first booted by fans back in 1979 on 45 and the 4 LP box set 'Behind Closed Doors.' The horns go in and out of an alternate master mix of "Don't Cry Daddy." "My Little Friend" sports a clipped intro and a mix as sparse as Curly Howard's shaved head!

The two minute "Promised Land" issued on the 1981 'This Is Elvis' soundtrack, complete with originally rejected Presley harmony, makes the cut for no obvious reason. An odd master take mix of "Spanish Eyes" from the same Dec'73 session at Stax is notable for a previously-unheard anywhere, prominent operatic harmony. It is apparently an "outfake" created by the producers of the CD! If true, they should be forced to watch N'Sync videos non-stop for the next 50 years.

Unnamed live performances unexpectedly pop up. Likely from the 16 Feb'70 dinner show in Las Vegas is a very good rendition of "Kentucky Rain" (an outstanding version from the same season was first issued on 'Behind Closed Doors'). It may well be sourced from RCA's 'Elvis Aron Presley' in 1980. Later we hear the 12 Jan'73 Aloha rehearsal "Steamroller Blues," too. As Elvis used to remark, weird, man.

This is a pointless collection. If the producers really gave a crap about what they were doing, they might have bothered to tell us why it was compiled.