The Lost Performances
VF 824 - M206393
Made in Malaysia - 2001
In early 1986, an inspection of the MGM vaults in Kansas yielded an amazing discovery: buried deep in these underground cellars was a long-forgotten collection of outtakes from the concert films "Thats the way it is" and "Elvis on tour". It was the most highly anticipated release of any Elvis footage ever and fans besieged Graceland hoping to get an early glimpse of these rare outtakes. In performances filmed between 1970 and 1972 in Nevada and North Carolina, Elvis sings hit after hit including "Hound dog" "Heartbreak hotel" "Dont be cruel" "Teddy bear" "The wonder of you" " and "All shook up" along with many other all-time favorites. More than a mere concert film, The Lost Performances also delivers a rare candid glimpse of this fabled performer in rehearsal footage shot on the MGM lot in 1970 as Elvis prepared for the Thats the way it is concert series, groundbreaking, earthshaking and altogether glorious, the revealing rock 'n' roll celebration is a must for every Elvis-fan. 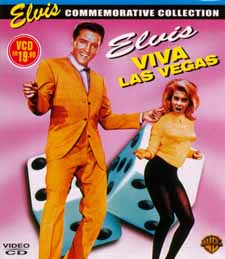 Viva Las Vegas
VF 824 - M600116 - 2 vcdset
Made in Malaysia - 2002
The Dynamite pairing of the King at the peak of his career with vivacious Ann Margret, plus the sure-bet combination of high voltage musical numbers, roaring race cars and lots of glittery Vegas action galore make Viva Las Vegas "Elvis Presley most popular movie". As a race car driver determined to win the Vegas Grand Prix, Elvis must come up with enough cash to buy a new high powered engine for his car. But its his heart thats racing when he meets a woman that distracts him from his goal: Lovely swimming instructor Ann Margret, along with luminous star power, its razzle dazzle Vegas funfest of showgirls and showcase and its climatic, hair rasing finale, the film delivers ten knockout songs, among them: What'd I say, The lady loves me and the smash-hit title tune. 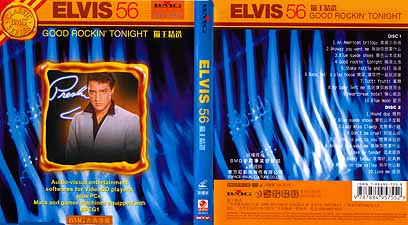 Elvis 56 - Good Rockin' Tonight
DB - 20023 - MTV - 2 vcdset
Made in Hong Kong - 2002
Great VCD in a nice looking package, it looks like a mini DVD case inside of a slipcase. The 2 VCDS contains the same as the Video/DVD "Elvis 56" it contains the following tracklisting: Disc1 - An American Trilogy, Anyway you want me, Blue suede shoes, Good rockin tonight, Shake rattle and roll, Baby lets play house, Tutti frutti, My baby left me, Heartbreak hotel, Blue moon - Disc 2 - Hound dog, Blue suede shoes, Lawdy miss clawdy, Dont be cruel, Trying to get to you, Anyway you want me, Love me tender, Ready teddy, Peace in the valley, Love me. 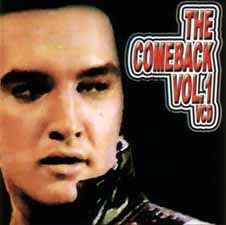 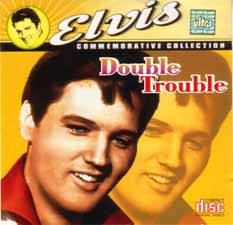 Double Trouble
VCD 1330 - 2 vcdset
Made in India - 2000
Double Trouble, Elvis 23 film (released after Easy come, easy go) found its way to the nations theatres just one month ahead of Elvis marriage to Priscilla Beaulieu. When suave American singing sensation Guy Lambert (Elvis) packs his bags for Europe, little does he suspect that this tour will include stops along the way with spies, counterspies, jewelthieves and two lovely foreign femmes. Its a mad cap European escapade featuring nine great songs including: "Long Legged girl", "Could I fall in love" and "There's so much world to see". 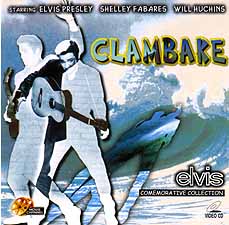 Clambake
E011/MC026 - 2 vcdset
Made in Malaysia
Million-heir Scott Heywood (Elvis), hoping to learn about life from the bottom up, trades identities with a penniless water ski instructor. Now he'll have to rely on his charm to complete with a rich playboy (Bill Bixby) for the affection of a beautiful co-ed (Shelley Fabares). This fast-paced combination of souped up speedboats and riveting rock 'n'roll features eight terrific songs including "You dont know me", The girl I love" and "Hey, hey, hey". 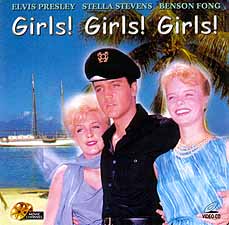 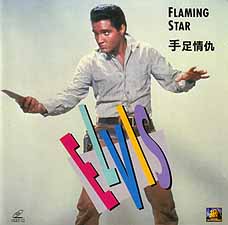 Flaming Star
VCD 11188 - 2 vcdset
Made in Hong Kong by Deltamac - 2001
West Texas in the years after the Civil war is an un-easy meeting ground of two cultures, one white, the other native American. Elvis potrays Pacer Burton, the son of a white rancher (John McIntire) and his beautiful Kiowa Indian wife (Dolores Del Rio). When fighting breaks out between the settlers and natives, Pacer tries to act as a peace maker, but the "Flaming star of death" pulls him irrevocably into the deadly violence. Co-starring Barbara Eden, the soundtrack features Elvis haunting performance of the title song. Considered by many critics as Elvis best screen performance, this moving portrayal of a man caught between two cultures makes Flaming Star a monumental Presley classic 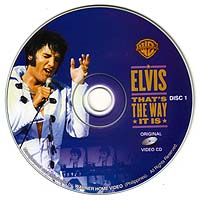 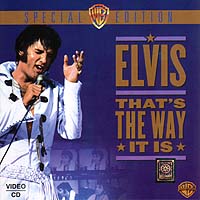 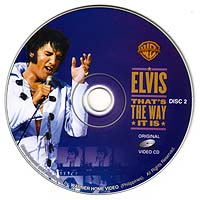 That's the way it is
52563 - Made in the Philippines - 2001 - 2 VCD'S
Strange video-CD from the Philippines, which contains 2 VCD'S. The booklet is very simple with only one printside, the backside is white. The 2 VCD'S have the same print as the frontcover, the picture-quality is not that great as the DVD-version but it is worth a look, the backcover of the jewelcase is the same as the video and DVD package. There are no subtitles and you have no menu, when you put this VCD in your PC or DVD - player it starts right away, the only thing that is different is that before the movie starts you have a trailer from TTWII and the documentary "Patch it up, the restoration of Elvis:that's the way it is". Also on the back they mention that this VCD is for Philippine homeviewing only. The tracklist is the same as the DVD and Video. 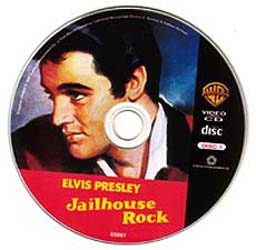 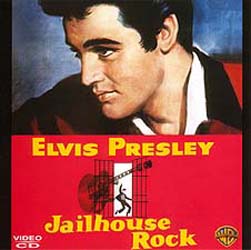 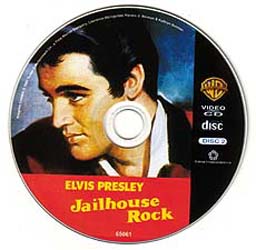 From the big house to the big time - Elvis style. One of the greatest ways to satisfy a fans inner Elvis is to go to Jailhouse Rock, the 1957box-office hit that's Elvis Presley's best film according to Leonard Maltin's Movie & Video Guide. The King plays Vince Everett, jailed for manslaughter after a bar fight. There, Vince learns to belt out tunes instead of saloon patrons and after being paroled, follows a bumpy road to music and movie success. Six Presley songs by Jerry Lieber and Mike Stoller spike the story, including "Treat me nice", "I wanna be free" and the shimmy-shakin' title tune that was Presley's favorite of all his films productions numbers. "It's the beast in me" Elvis says after kissing Peggy (Judy Tyler), yeah, but it's the best of him too.Picture quality is great and sharp.It comes on 2 VCD'S. 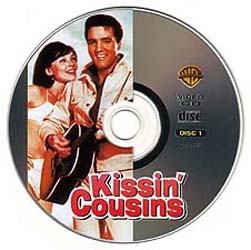 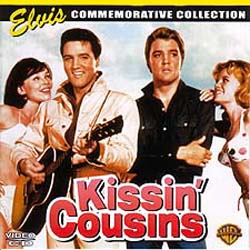 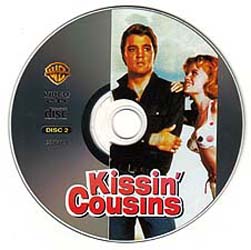 In 1964, Elvis was already a veteran of 14 hugely popular films, but his 15th would have the country seeing double. Using a "split screen" technology that was in vogue at the time, Elvis was able to satisfy his fans growing appetite for their idol by playing two parts (including one as a blond). Audiences couldn't get enough of the King. His face, his voice and his name were already everywhere from t-shirts to television screens, from lunch boxes to lipstick. And with Kissin' Cousins" promotional push which included the distribution of thousands of free wallet-size Elvis Presley calenders and special press kits for fan club members everywhere, the film proved that "Elvis mania" was definitely here to stay. Elvis doubles the pleasure and the fun when he plays both an earnest Air force leutenant and his stubborn hillbilly cousin who doesn't have much patience for city-folks. When the two face off over a government land deal, they provide a double-dose of humor and hits to match, including "Kissin' Cousins", "Barefoot ballad" and "Tender feeling".Picture quality is great and sharp.It comes on 2 VCD'S. 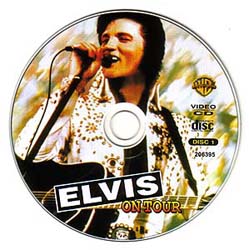 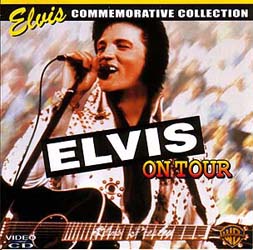 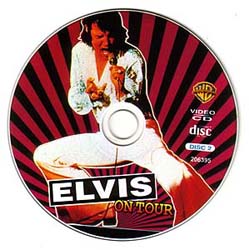 For Elvis Presley the 70s were a time of tremendous success. Named one of the outstanding men of the nation by the Jaycees, he also triumphantly returned to live performance, reaching a new level of superstardom. He had it all, at 36 he won the 1971 Bing Crosby Award from the National Academy of Recording Arts and sciences, he broke attendance records wherever he appeared in concert, and took home his second Grammy Award (best inspiration performances "He touched me" 1972) it was a fitting and exciting time to capture a national tour on film. Winner of the 1972 Golden Globe for best documemtary, Elvis on tour electrifies as it displays the King in top form and all the magic intact.Featuring dynamic rehearsal and on the road footage, the film captures the man behind the legend, providing a rare glimpse of personal and touching moments that reveal Elvis as never before. You'll witness the undisputed King of Rock 'n' Roll performing thrilling renditions of "Love me tender", "Burning love" and more, all filmed during his incredible 1972 15-city cross-country tour.Picture quality is great and sharp.It comes on 2 VCD'S. 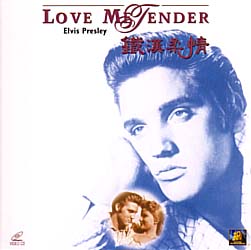 Love me tender marked the screen debut of Elvis Presley..... and what an excellent debut, with a fast and exciting plot and an unusual and compelling role for Elvis, this film ranks among the best of the many Elvis films, set during the civil war, this tale of a confederate family torn by jealously and greed is a strong, gripping drama. With Elvis giving an outstanding performances as a troubled youth battling poassions which run far too deep to be settled peacefully. True to audience expectations, Elvis sings four great songs as only he can render them: "Poor boy" "We're gonna move" "Let me" and the smash-hit title song "Love me tender".This movie is original in black & white but Hong Kong made it in a color version.Picture quality is great and sharp.It comes on 2 VCD'S. 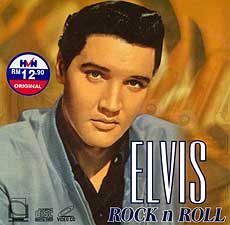 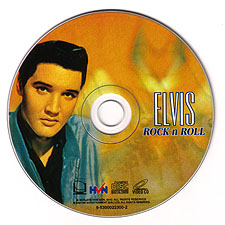 It’s now or never to see The King of Rock n Roll, Elvis Presley. This visual history traces Elvis’s career from his humble childhood in Memphis to the top, and follows him on through his years in show business and films to his death at 42. In startling photographs and rare footage from all periods of his life, including the famous "Heartbreak Hotel" which he sang it on the much viewed Stage Show TV program, "Hound Dog", "Love Me Tender" and the height of his fame "Jailhouse Rock"....Elvis was undoubtedly the quintessence of American popular music and its greatest legend.Picture quality is sometimes not that best. 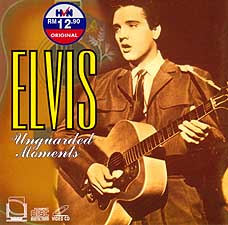 In 1968 Elvis made a triumphant comeback in a Christmas Television Special, it was the perfect response to the media and people who had said his career was over. The show thrilled both new and old fans and bought unanimous acclaim from all of his critics. Dressed in black leather from head to toe Elvis put an on electrifying performance singing some of his greatest recordings. This video-CD is from one of the rehearsals for that show.

Rediscovered, it contains actual performances. The sound has been digitally enhanced in an effort to capture the original quality of Elvis. It also catches Elvis in more relaxed moments as he jokes with the audience and talks openly about the past. Nearly last forever, this unique footage gives a rare insight into the man who was about to make his first performance in front of a live audience for eight years. Shown in its original form the visual shown its age but the digitally enhanced sound brings the memories flooding back, memories of the man who truly was THE KING.Picture quality is not so good.