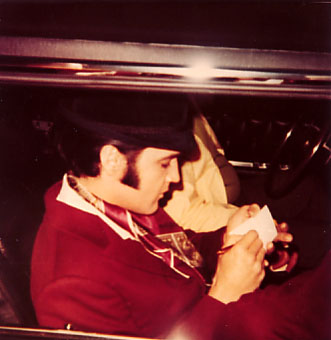 Beverly Hills, CA. November 1968. Elvis pauses at the gate to speak with fans and to sign autographs. He always allowed his fans to see him and surrounded himself with them as often as he could. 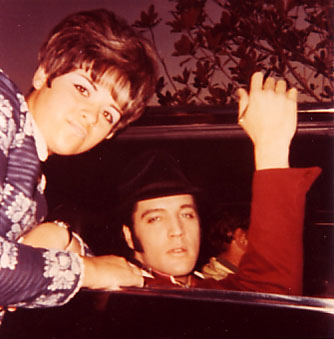 Judy Palmer relates an incident that happened while Elvis was living at his Trousdale Estates. " At one time " Judy says, " many of the neigbors were complaining because of all the people standing around outside the house, and finally it came to the point where the police said " Look, you can't stand out there. " So we all moved down to the bottom of the hill waiting for Elvis to come out.

" About five minutes later, Elvis came down in the limousine and he stopped at the bottom of the hill where we were all waiting, stuck his arm out the window and motioned , " Follow me. " We all jumped in our cars and followed him. He turned off Sunset and went down Tahinee and through a yellow light. Of course, we all went through a red light, just to keep up with him.

" Sitting in a patrol car parked at the corner was a policeman who couldn't believe he was seeing fifteen cars bumper to bumper going through a red light. He never moved. He just sat there and looked in total disbelief. " Well, we must have been lagging too far behind because Elvis would pull over to the side to wait for all of us to catch up with him and off he'd go again. Finally at the end of Tahinee Street, Elvis stops the limo, opens the sunroof and stands up and started chatting and signing autographs for the fans. " 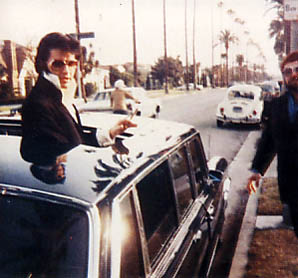 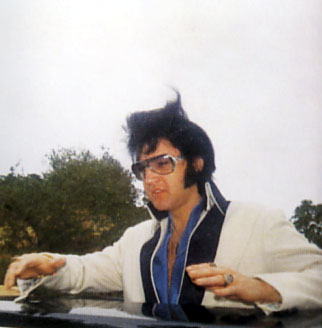